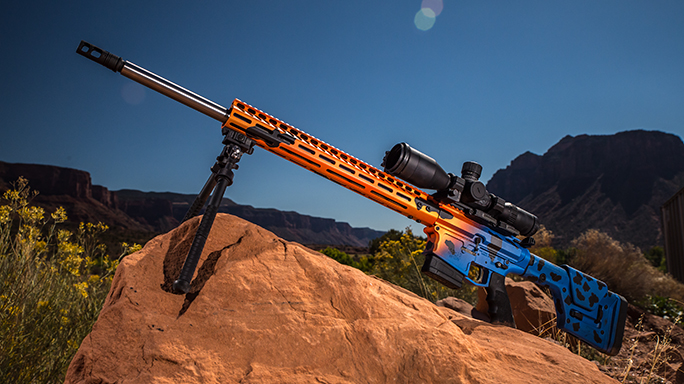 This Dark Storm DS-15 Signature Series rifle also has a drop-in trigger with a crisp four-pound pull and short reset; and a 15-inch extended M-LOK forearm and full-length Picatinny top rail for accessories. In addition, a Magpul CTR adjustable stock is included, as is an ambidextrous sling plate and a Hogue rubberized pistol grip. It ships out with an Amend2 MOD-2 30-round magazine.

The rifle sports a custom “battle-worn” Cerakoted American flag that is definitely eye-catching.

“The DS-15 Signature Freedom Flag rifle proved to be quite popular at our booth this past SHOT Show,” Dark Storm founder and co-owner Ed Newman said in a press release. “No matter what state you live in or do business in, Dark Storm is the one company you can go to for the largest choice of rifles available to California and other restricted states, including our new Signature Series.”

The Darm Storm DS-15 Signature Series Freedom Flag 5.56 rifle is available in standard, fixed magazine (with a 10-round PMAG magazine) and featureless (for New York and California) configurations. MSRP is, fittingly, $1,776.

See the specs for the standard rifle below. For more, visit dark-storm.com.