Primary Weapons Systems (PWS) came out swinging this year with the new MK1 Pro lineup. Those who have always wanted one of the company’s legendary rifles, which utilize an AKM-style long-stroke gas piston, can now get one for under $1,000. 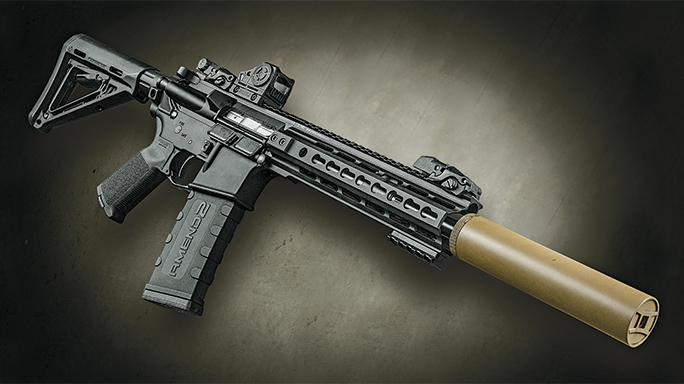 AKM what, and for how much? For those who may not know, PWS actually has roots in the AK side of the house. The company’s engineers took that knowledge to fix what many believe Eugene Stoner’s original design lacked: a gas piston operating system. Think about it. Most proven battle rifles have been built around a gas piston to run cleaner, cooler and more efficiently. Fast-forward more than a decade and PWS is now offering its legendary long-stroke piston in a more budget-friendly package.

While the basic operating system is the same, PWS has been tweaking and perfecting its lead-delivery systems for over a decade to make them lighter, stronger and more accurate while maintaining 100-percent reliability. Which brings us to the MK116 Pro, which showcases the best of PWS while also competing directly with the high-end direct-impingement (DI) ARs on the market.

First off, the MK116 Pro stands out because of its $996 price tag. This is partially because PWS is a full-service machine shop, meaning it manufactures approximately 90 percent of its own parts in-house. This provides a huge cost savings compared with other companies that farm out their manufacturing and essentially sell customers kit-built ARs. Altogether, the MK116 Pro seems like one hell of a deal.

According to PWS, the MK116 Pro was designed from the inside out, as it retains the company’s original long-stroke gas piston system. The upper receiver is made from a 6061-T6 aluminum extrusion while the lower is forged from 7075-T6 aluminum. It comes with a 16.1-inch, button-rifled, 416 stainless steel barrel with a .223 Wylde chamber and an A2-style flash suppressor. The upper also features a Raptor ambidextrous charging handle, and surrounding the barrel and gas piston system is a 15-inch handguard with a full-length Picatinny rail on top and M-LOK slots in the 3, 6 and 9 o’clock positions.

The lower includes PWS’ enhanced buffer tube as well as its Ratchet Lock castle nut and end plate, which features a built-in quick-detach (QD) sling socket. Then PWS turned to Bravo Company Manufacturing (BCM) for the Gunfighter stock and pistol grip. The trigger is an enhanced mil-spec unit that has been coated in Teflon for greater corrosion resistance.

The PWS MK116 Pro is a great base rifle to build upon, as my test rifle produced sub-MOA groups right out of the box. Speer’s 75-grain Gold Dot load produced a 0.74-inch five-shot group at 100 yards. Now, I did kind of cheat, as I was using the new BOG DeathGrip carbon-fiber shooting tripod to stabilize the Pro. That thing is a beast, as it has spikes that extend out of the feet for a better grip on any surface. If you run out of ammo, just leave the spikes out and you’ll have three spears!

The trigger on the MK116 Pro isn’t bad at all. It could be better, but it’s at least much nicer than your average, gritty-feeling mil-spec trigger. Again, PWS meant for this rifle to be able to go right into battle as is, but there is always room for improvement. The MK116 Pro also lacks a forward assist, which seems to be a trend now in the more budget-minded rifles. But honestly, if you aren’t crawling through mud, dust and dirt, you most likely will never need that forward assist anyway. Its sole purpose is to quietly make sure that the round was completely seated in the chamber in the event that you just crawled out of a mud hole and are now setting an ambush. The average shooter will never miss it.

PWS states that the MK116 Pro was intended to be a more budget-minded firearm. In part, it’s for those who are looking to try a gas piston but haven’t due to such weapons’ high prices or lack of availability. The rest of the rifles in the PWS family are priced a bit higher but seem to be worth every penny to the shooters who own them. The funny thing is, the internals of the MK116 Pro are exactly the same as those in the PWS MK116 MOD 2-M, which costs several hundred dollars more. The Pro simply has fewer bells and whistles, as PWS intended. This is so shooters can upgrade and customize the rifle as they see fit.

To that end, I outfitted my test rifle with a Viridian light/laser unit for easy target identification. The XL5-RS Gen 3 features a green laser as well as a 500-lumen Cree LED light, and both aspects have some serious reach. Any bad guy would be able to see the green dot on their chest at 100 yards, for example. The best part is that the XL5-RS is controlled by a tape switch that is easily movable via a small Velcro tab.

Given the cost savings on the PWS MK116 Pro, this would also be an ideal patrol rifle for law enforcement duty use. You save money on the purchase price, and have more to spend on optics and bullets. Need to save even more money? Then try the Primary Arms Compact 1X Prism Scope with the ACSS-Cyclops reticle. It’s small, the reticle is etched into the glass, and it’ll see you through hell and back. Or, with the money you saved on the rifle, you can opt for a Trijicon 4X ACOG with the ACSS reticle sighting system. The ACOG is a proven optic that has enabled our nation’s bravest to send “freedom pills” accurately downrange, one round at a time. To make the ACOG even better, I ditched the factory mount in favor of a Bobro Engineering ACOG mount.

I don’t ever anticipate my ACOG going bad. There are no batteries to worry about, as the sight uses a combination of fiber optics and tritium for illumination. However, on the off chance that it does give up the ghost, the Bobro mount makes it easy to jettison the ACOG in a pinch. Then the shooter simply deploys their backup sights and is back in business. 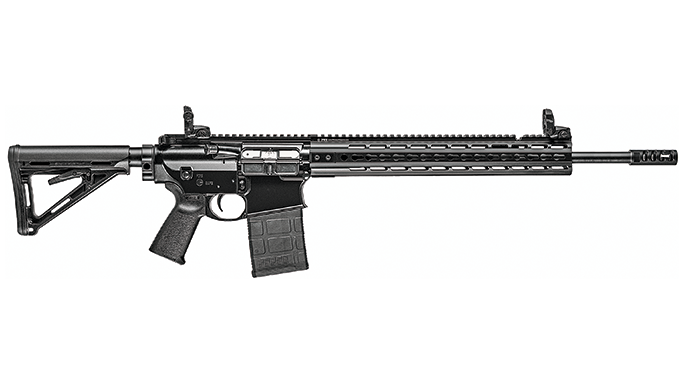 The PWS MK116 Pro is one serious AR that is built to run cooler, cleaner and more efficiently than most of its competition. I know that statement is probably going to cheese off some of the DI die-hards out there. So take it as a challenge and try a PWS rifle. They’re the only ARs that use a long-stroke gas piston design, and if you pick one up, you’ll immediately notice the quality that goes into the build. I was skeptical at first, too, but now I’m a believer. I’ve literally sent just over 500 rounds through the barrel of the MK116 Pro. But the action is still quite clean. The excess gas and fouling vents out of the barrel, up near the front.

Finally, the barrel, with its .223 Wylde chambering and 1-in-8-inch-twist button rifling, helps make the MK116 Pro a tack driver. When accuracy counts, Primary Weapons Systems has you covered. The company provides the perfect tools, so now it’s up to you to take full advantage of the quality and craftsmanship that goes into each and every firearm that leaves its factory. You can buy the MK116 Pro with complete confidence. For more information, visit primaryweapons.com.

Bullet weight measured in grains, velocity in fps by chronograph and accuracy in inches. Best five-shot groups at 100 yards.