For the past few years, I’ve participated in Ruger’s quasi-annual survey that they send out to get information about their buyers and what products we want. Each year, I went to the effort of responding to their questions and then also wrote my own comments at the end. Each time, I have asked them to resurrect the 9mm carbine. 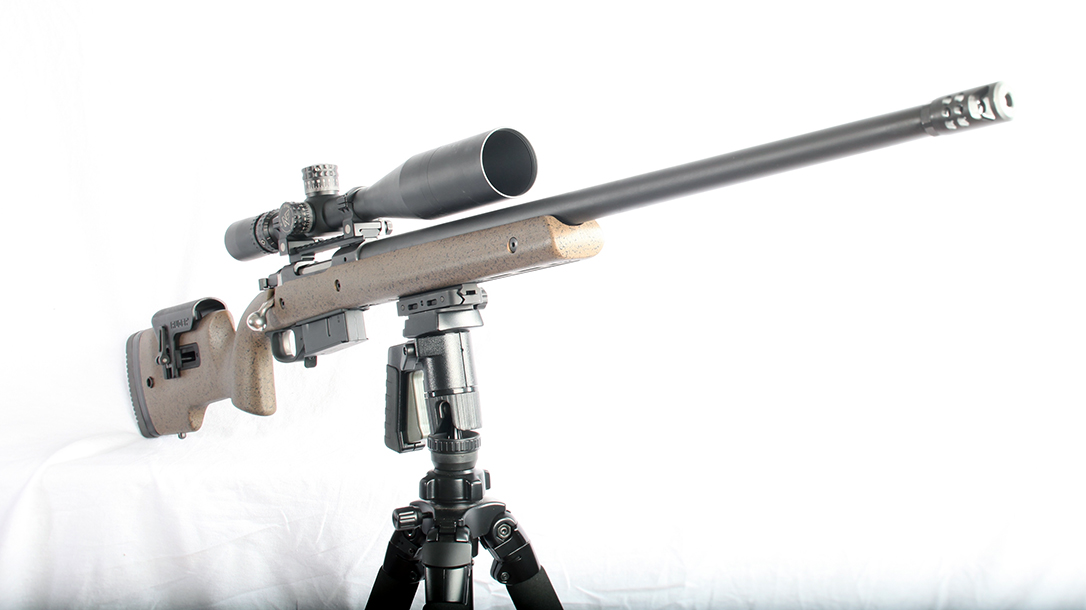 Of course, many people have done that, I’m sure. But I also went the extra step of making a forceful argument for why they should offer one that accepts Glock magazines and not just their own magazines. I mean, that would be a fantastic way to move more units and make more money, right? All kidding aside, in late 2017, Ruger did just what we hoped with the introduction of their new PC Carbine in 9mm, and now the world is right again.

The PC Carbine has an overall length of 34.37 inches. It comes with spacers that will adjust the length of pull from 12.62 to 14.12 inches. The new model is just a hair lighter at 6.8 pounds and sports a 16.12-inch, cold-hammer-forged, chrome-moly barrel. The barrel is fluted to reduce weight and it has the added benefits of increasing rigidity and surface area to reduce heat build-up.

The PC Carbine wears a protected-blade front sight to match up with the rear ghost-ring sight. Also, the barrel on the one I received was threaded with a ½-inch-28 pattern that mates nicely with a Silencerco Octane 9 suppressor, though a non-threaded version is available. Ruger even went the extra mile to include an O-ring to help keep the thread cap from walking off—something I don’t see on many pistols or carbines with threaded barrels.

The new PCC includes a few twists that takes the concept to the next level. First, the 7075-T6 aluminum receiver sports a Picatinny rail for easier sighting options. The glass-filled nylon stock also incorporates a short Picatinny rail for the use of add-on accessories. In addition, the stock includes two swivel studs for standard sling attachment.

Another fan favorite is the ability to reverse the magazine release for left-handed shooters. That’s popular on pistols and will surely be a welcome addition here as well. Not stopping there, Ruger went ahead and made the charging handle reversible as well. That’s definitely something that appeals to me.

There are a couple of significant things that separates the Ruger PC Carbine from other run-of-the-mill carbines made by major manufacturers. The first aspect is the ability to take down the PC Carbine, meaning that the user can separate the rifle into basically two halves. This is done by pushing a lever and twisting the forearm assembly so that it comes free from the receiver/stock assembly.

This offers huge benefits for easier storage, and, more importantly, convenient transport. For someone that likes to hit the trail for hiking and backpacking, breaking the PC Carbine down to two pieces makes it a simple affair to slide them into a pack to be reassembled for later use.

This also applies to users in urban areas. By stashing the two pieces into a pack or other case, doesn’t scream “Rifle!” at those in your vicinity. For me, breaking it down also means an easier time cleaning the carbine when it’s needed.

The other ingenious thing that Ruger did with the PC Carbine is design interchangeable magazine wells that will accept magazines from Ruger’s SR-Series and Security-9 pistols as well as double-stack 9mm magazines from Glock pistols like the G17, G19, etc. Instructions for swapping the wells are in the manual, but it’s a very simply affair that requires only a hex key and about 10 minutes of your time.

In short, the PCC is a handy little rifle that will appeal to a wide variety of shooters. As mentioned, hikers and backpackers can slip it in their gear easily for personal defense or for plinking on the trail. In a survival situation, one could even take small game with it in a pinch.

For those preppers and survivalists that keep a Bug-Out Bag on hand, the PC Carbine is a great low-profile defensive tool to take with you on the move. Now many folks will say, “If I’m carrying a rifle, I want a rifle-caliber round.”

That argument has merit; however, the Ruger PC Carbine provides a low-profile way to enjoy the advantages of a defensive rifle for a bug-out or other emergency situation without advertising the fact that they have it. Such advantages include a longer sight radius, better optics, ammo interchangeability with a carry pistol, and the list goes on. Just slip the two pieces into a pack or a bag and you’re good to go.

Also, one consideration to keep in mind is because of its take-down nature, the PC Carbine can go where a regular rifle cannot go anyway. In such an instance, there is no “concession” made to a smaller caliber, but only the added benefit of a rifle platform where one would not normally be available. Yes, there are other high-end, semi-automatic takedown rifles of a more powerful caliber. However, you’d be hard pressed to find one in the PC Carbine’s price range.

Ruger provides all the details and intricacies of the PC Carbine on its website, including the mechanics of its operating system and deadblow action which makes the recoil absolutely a non-issue. What’s most important is how it handles and performs in the field. After a few sessions with the little carbine, I have to say that I was mightily impressed.

The rifle is well balanced, and its light weight makes it easy to quickly bring to the shoulder. The takedown mechanism is nearly effortless to operate, just like with the company’s takedown 10/22. The ghost ring and front blade provide an excellent sight picture if you want to roll with irons, but I played with a Holosun HS510C and a Leupold 2-7 x 33mm VXR (with illuminated reticle) as well.

The PC Carbine utilizes 10/22 trigger components, and the trigger pull was quite nice for a production rifle. According to my Lyman digital trigger gauge, the pull weight averaged 3.1 pounds. That’s the same territory as custom 1911 pistols.

The reliability of the Ruger PCC was outstanding. There was not a single malfunction of any sort with a wide variety of factory ammunition ranging from 115- to 124-grain ball ammo from Sig Sauer and Fiocchi, and multiple hollowpoint types from Sig Sauer and Hornady. Ruger’s PC Carbine gobbled up everything we threw at it. As for durability, well…only time will tell. After five sessions with the little carbine, I’ve got well over 700 rounds through it and no issues so far.

With the assistance of a shooting buddy, we also tried the carbine with different magazine types. Aftermarket KCI (Korean) and PMag Glock-type magazines fed just as reliably as the factory magazines. However, there are reports that some aftermarket magazine brands are a little tight and won’t drop free. So make sure you check a few out in the carbine before you spend a lot of money stocking up.

The Ruger PC Carbine isn’t exactly the best choice for sniping, but it’s plenty accurate for the typical uses for which this carbine was designed. With the Leupold 2-7x33mm VX-R average group sizes ran between 1.5 and 2.5 inches depending on the load. With a razor-thin margin, the best average group of 1.61 inches at 50 yards was shot with Sig Sauer’s 124-grain Elite V-Crown load. However, Hornady’s 147-grain XTP round had an average size of 1.65 inches. The difference between the two could easily have been the human factor.

That said, for the distances for which I would typically use this carbine, I would probably just keep the Holosun HS510C mounted. With the carbine’s fast handling and the open view of the 65-MOA circle/dot arrangement of the HS510C, for defensive work, you couldn’t ask for a faster setup. For more precise work, like hunting small game, the 65-MOA circle can be turned off, leaving the user with just the red dot for a more unobstructed view.

Ruger did an excellent job in producing a sleek platform for pistol-caliber carbine fans that is convenient, versatile and fun to shoot. It offers solid defensive features and capabilities for those that might not be able to handle more powerful calibers. And due to the cheaper cost of 9mm ammunition, it’s a more economical shooter as well.

There’s a whole lot to like about Ruger’s various pistol-caliber rifles already, but nice extras like the take-down feature and interchangeable mag wells takes it to a whole other level. By combining those extras with great accuracy and rock-solid reliability, Ruger has another winner on its hands. The only question left is, “When will the 10mm version will be available?”