Italy has long been known for making quality weapons, from sword-makers and some of the first firearms to today’s modern guns. Beretta, for example, was officially founded back in 1526 to make barrels for the arsenal of Venice. It’s now the oldest active gun manufacturer in the world. That history includes every type of firearm, including pocket pistols, rifles and shotguns, and each is a work of art. Just think about it: Beretta has been supplying military arms longer than some countries have existed, including the U.S. 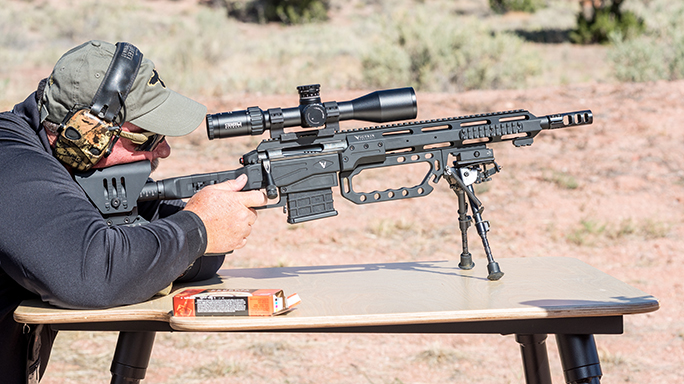 Like any large company, Beretta has acquired and imported other products, too. A few years ago, Beretta acquired Tikka to offer quality duty and precision rifles. Military applications require something a bit different, though, which brought Beretta to Victrix Armaments.

Victrix is based in the Gandino Valley of Italy, northeast of Bergamo, and the company has over 45 years of experience in the precision engineering world. Its rifles are built using state-of-the-art CNC machines that were originally designed to manufacture high-tolerance medical devices. This means that each gun is meticulously machined with incredible attention to detail, and every component (aside from the Benchmark barrels) is made in-house. This allows Victrix to maintain tight tolerances using state-of-the-art measuring equipment.

Computer-controlled machining has reached a stunning level of precision these days, with tolerances hand-lapping and hand-fitting simply cannot achieve. This also saves on costs and eases production burdens, making it easier for shooters to get higher-quality weapons. Of course, some aspects still require the attention of a master machinist, and that’s why Victrix is staffed by people dedicated to creating the best precision rifles for hunters, competitors, enthusiasts as well as military and law enforcement personnel.

One of my assignments at Athlon Outdoors’ Rendezvous media event last fall was to cover the new Victrix Armaments Scorpio and Pugio precision rifles now being imported by Beretta. I’ve been in this world a while, so I was only mildly interested in testing more bolt-action rifles. But I was absolutely impressed when I got to shoot these guns. The European influence is obvious in the U.S. precision world today, and Victrix’s rifles represent the pinnacle of that evolution.

Available in .338 Lapua Magnum, .300 Winchester Magnum and .300 Norma Magnum, the Scorpio is designed for longer ranges and moderately hard targets. It starts with the Victrix’s Minerva three-lug long action, which offers a 60-degree throw. Made from AISI 630 steel, it’s coated in PVD for smooth operation and protection from the elements. It’s also compatible with AICS magazines, and my test sample arrived with a five-round polymer magazine, though Victrix offers eight-rounders to law enforcement personnel.

The bolt is fluted to reduce weight, but it also helps give debris somewhere to go in harsh conditions, ensuring a proper lockup in sand, dirt, snow, etc. The bolt handle is knurled, with a slight bend for smooth, fast manipulations. The trigger can be used as a single- or two-stage unit, and both stages are adjustable. My test rifle’s trigger pull measured 3 pounds, which is perfect for me, so I didn’t have to alter it.

The test rifle was also chambered in .300 Norma Magnum, and it sported a match-grade 26-inch, AISI 416R barrel lapped for accuracy and capped with a large three-chamber muzzle brake. Surrounding the barreled action is a purpose-built chassis system using an AR-style pistol grip, an infinitely adjustable folding stock and an octagonal handguard with removable rails, though a version with KeyMod slots is also available. You’ll also notice a unique grip machined into the bottom of the forend. In short, this chassis is the epitome of European engineering, as it can easily be adjusted to fit just about anyone on the fly for the perfect match of rifle and shooter.

Factory 230-grain Norma loads require 20 mils of elevation at extended ranges. Handloads need a bit less. So, I needed a scope capable of providing at least 20 mils of elevation after zeroing, making Nightforce’s 5-25x56mm ATACR perfect for this evaluation. Using a 40-MOA mount allowed almost 30 mils of elevation on this rifle. The scope’s glass is incredibly clear, and the turrets are tactile, precise and easy to read. I also installed used my Modular Evolution bipod, which is light with a bit more height, making it a great fit for this rifle.

Factory-loaded .300 Norma Magnum is sparse and expensive at a bit more than $4 per round. Handloading cuts that in half, but I’m hopeful that’ll change soon. This caliber is quickly becoming a favorite among Special Mission Units, and tons of backstage testing is going on, as it has for years. This might be the most versatile long-range, soft-target cartridge available. It also happens to be an excellent long-range hunting round.

For factory ammo, I used Norma’s 230-grain Berger Hyrbid OTM rounds along with some ABM rounds that used a lighter 215-grain version of the same projectile. I also created some handloads using the 230-grain Berger OTMs and Hornady 212-grain ELD-Xs in Norma brass.

Testing long-range rifles at “short” distances (300 yards and in) is interesting. This isn’t their sweet spot, and you’ll find many other calibers are better suited for close ranges. But it’s important to establish a baseline, and this rifle was very accurate. At 100 yards, my best group came from by Berger 230-grain handload at 0.47 inches. Four of the five shots were actually closer to 0.3 inches before a flyer opened things up. The 215-grain ABM rounds performed similarly. The least accurate was the Norma load.

At 300 yards, the rifle produced its tightest five-shot group—just 0.78 inches—with the ABM ammo. Every other group was right around 1.5 inches. The Hornady ELD-X handload produced the widest group at this range, but it only measured 1.47 inches, well below MOA. In fact, within 1,000 yards, the Victrix kept everything inside 1 MOA for three shots. The trigger was predictable, clean and crisp out of the box, making it pretty easy to stay on target.

The bolt was also incredibly smooth and fast. The bolt handle and knob make it easy to run the bolt quickly. I performed a couple of drills by firing at 300 yards and moving out to 800 meters, and the Victrix is definitely fast. So fast that I can’t wait to run the .308 Winchester Pugio through the same speed drills.

The chassis was comfortable and easy to adjust. The Victrix isn’t heavier than any other magnum precision rifles fielded by the military nowadays, but at almost 15 pounds without a scope and bipod, it’s no lightweight hunter. On the other hand, it’s soft shooting, although the muzzle brake accounts for most of that. Used side by side with other rifles, the Victrix was always easier to control and softer to shoot thanks to its brake, especially with the slower factory Norma rounds.

The handguard allows you to add lights, night vision and other accessories, and the bottom rail accommodated several bipods. The stock locks into place solidly in the extended and folded positions. Releasing it requires you to push down on a lever and then pull up, then it’ll swing freely. This isn’t a quick-deployment rifle that you’ll pull out of a bag and use in seconds. So having a positive stock locking system is nice. Overall, the test rifle exhibits superb fit and finish.

Short of downrange energy, the .300 Norma Magnum will do anything a .338 Lapua will with less cost and recoil yet greater precision. Measured side by side, even the 215-grain Bergers match or exceed 300-grain .338 Lapua OTMs at everything except energy on target, although I’m not sure that really means much on a soft target. With a muzzle velocity of 3,150 fps, the 230-grain Berger will still have 1,100 foot-pounds of energy at a mile—the equivalent of a 240-grain .44 Magnum at point-blank range. No, this isn’t a direct comparison because the bullets are different, but I wouldn’t want to test the difference.

Which brings us to shots at 2,000 yards—the limit for most similar cartridges. My 230-grain Berger handload was transonic at 1,900 yards. The 212-grain ELD-X handload was subsonic, and the Normas were on the edge of subsonic. You can reach 2,000 yards using a good scope with enough elevation and a normal mount. Beyond that and you’re moving into .375 CheyTac range and will need some specialized equipment.

Loaded up with the faster 230-grain Berger round, I got hits on a 3-by-3-foot steel target at 2,000 yards using 17.7 mils of elevation. After accounting for wind, I placed three consecutive shots on steel, with an overall vertical spread of about 25 inches. My horizontal spread was more like 10 inches, which is pretty tight for that range. The factory Norma ammo required almost 22 mils. The elevation for the ABM was about the same as my 230-grain handload, and the ELD-Xs needed just a bit more. But, in short, I got hits on steel at 2,000 yards within just a few rounds.

This rifle is poised to compete with the likes of Accuracy International and other high-end European precision rifles in the same price range. It’s expensive, but it’s an excellent long-range rifle whether you’re shooting targets or serve in a law enforcement or military position. Similar rifles sell incredibly well here in the U.S., and the Victrix provides another option. And getting one chambered in the .300 Norma Magnum gives you a ton of bullet choices, letting you create whatever you need for the task at hand. Lighter bullets will cut down on recoil while still being very effective at reasonable hunting distances.

If you’re in need of a dedicated long-range rifle, make sure you put the Victrix Armaments Scorpio at the top of your list. For more information, visit victrixarmaments.com. 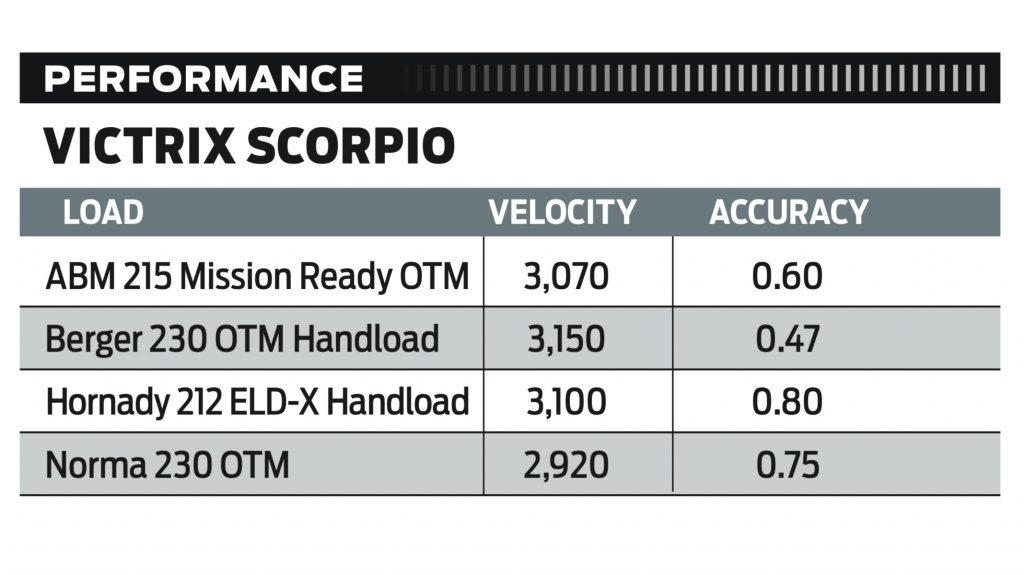 This article is from the 2019 Gun Annual issue of Tactical-Life magazine. Grab your copy at OutdoorGroupStore.com. For digital editions, visit Amazon.