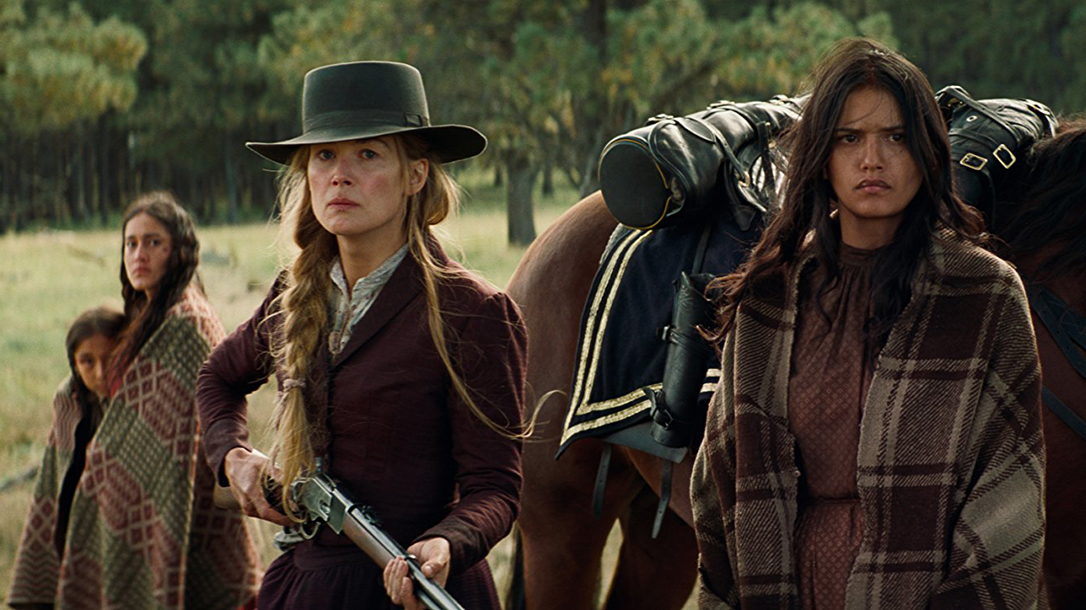 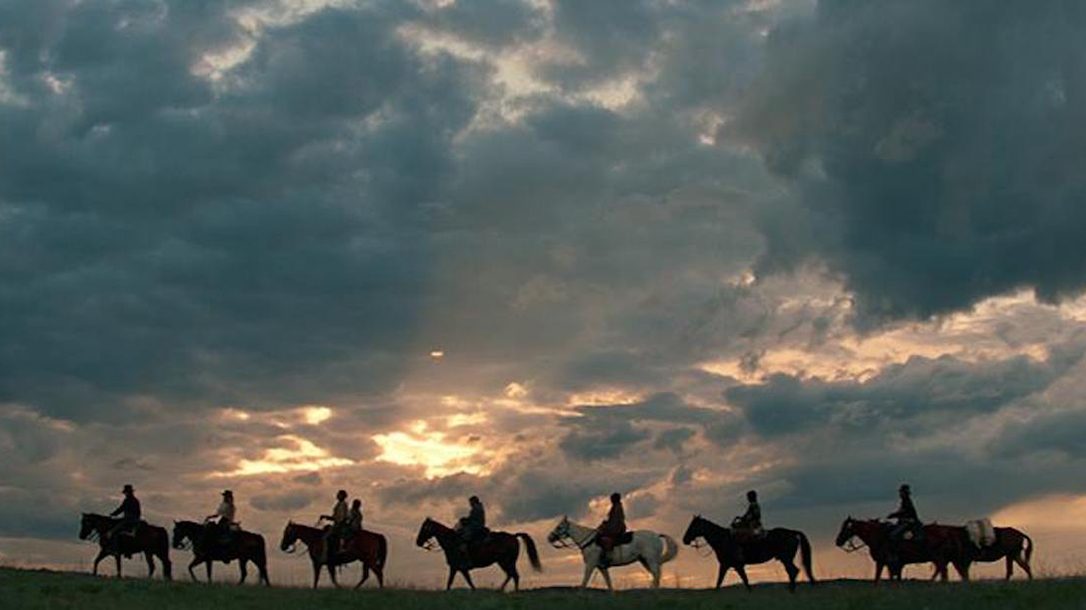 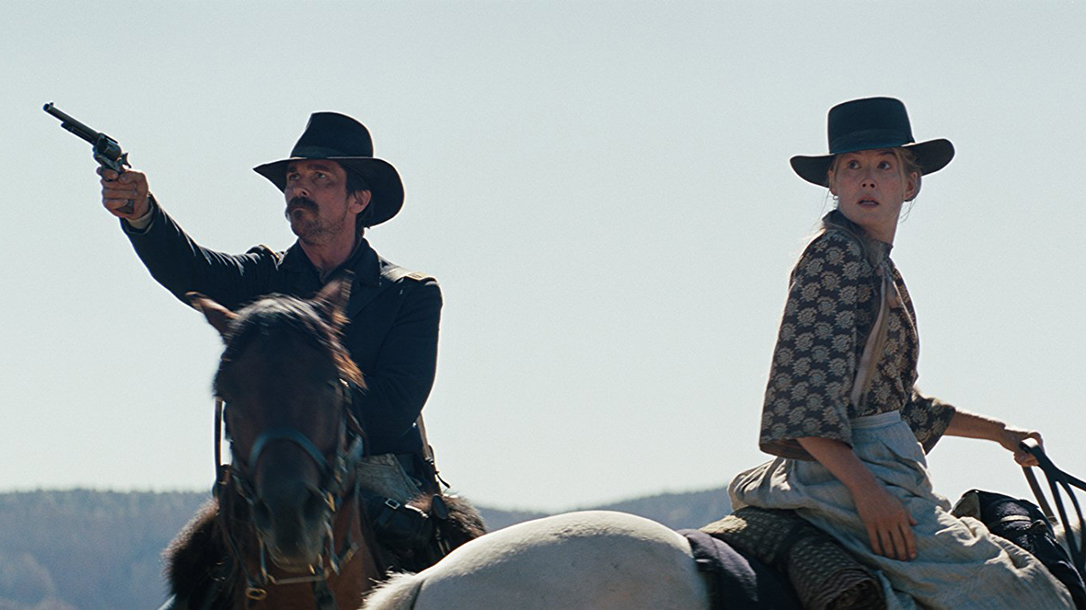 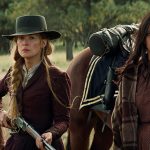 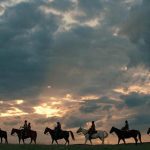 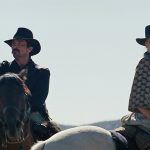 Released in 2017, Hostiles is a Western film written and directed by Scott Cooper. The story is set in 1892 and follows U.S. Army Captain Joseph Blocker (Christian Bale), who is ordered to escort a dying Cheyenne chief, Yellow Hawk (Wes Studi), and his family back to their tribal land in Montana. Capt. Blocker reluctantly accepts his orders, despite his own gory history with Chief Yellow Hawk, who was an enemy combatant against Blocker and the United States. Yellow Hawk was responsible for the death of several of Blocker’s friends and his comrades. 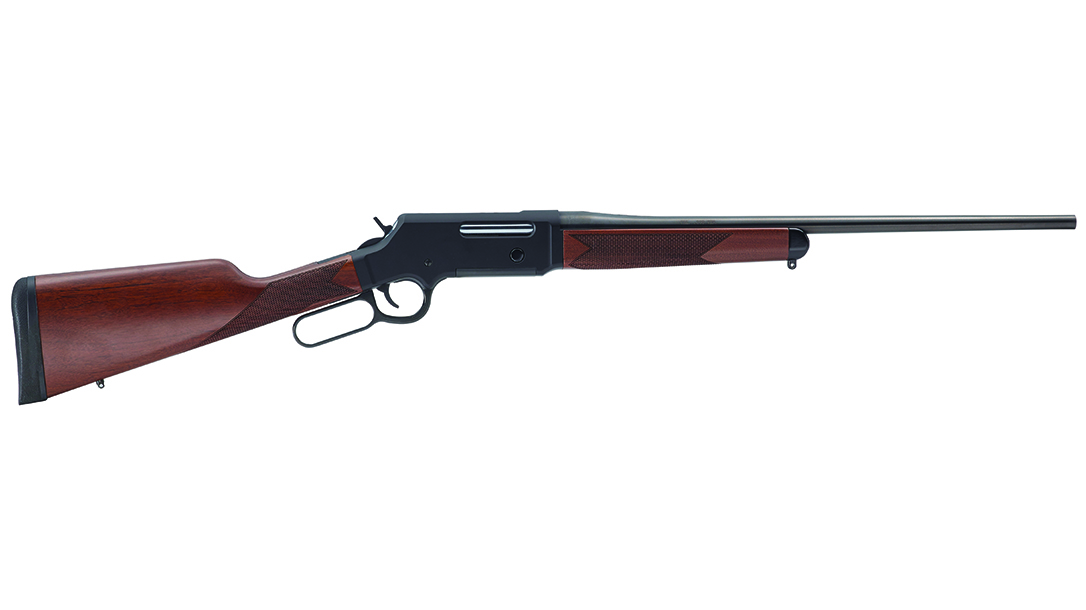 Nevertheless, Blocker and a small detail of soldiers escort Yellow Hawk and his family on a harrowing and perilous journey from Fort Berringer, New Mexico, to Montana. During their journey, the group soon encounters a young widow, Rosalee Quaid (Rosemund Pike), whose family has been killed by renegade Comanche Indians. Quaid joins Blocker’s detail in their travels. The travelers must now band together to survive a beautiful yet punishing landscape that’s crawling with hostile renegade Indians and outlaws.

For those who love this time period, it’s great to see more Western movies and TV shows coming from Hollywood. The casting of the film was excellent, with stars Adam Beach (Black Hawk) and Ben Foster (Philip Wills) of 3:10 to Yuma fame riding alongside Christian Bale, Rosamund Pike and Wes Studi. However, despite the great costuming and cast, the film did have a few social and technical mistakes, which we’ll address here.

The film starts off with some good action scenes, as to be expected from any great Western. However, in Hostiles, some viewers may find fault in the underlying story of Blocker struggling with his remorse and regret as to how he had wronged the Native American people. But Blocker is dealing directly with an enemy that killed his friends and fellow soldiers, an enemy that committed extreme violence against European settlers. It’s more plausible that Blocker would be in conflict with the trauma of war and killing, as opposed to what comes across as more of a 21st century social consciousness regarding the atrocities against the American Indians.

Another notable social issue in the film relates to Corporal Henry Woodson (Jonathan Majors), an African-American soldier assigned to Blocker’s detail on the journey to Montana. A black soldier assigned to a white unit would be extremely unlikely in 1892 because of military segregation at the time. Even though Congress authorized the formation of African-American regiments in 1866, segregation was very much in practice during 1892. The military wasn’t fully integrated until Harry Truman signed Executive Order 9981 on July 26, 1948. But even then, segregation was commonplace throughout the military up and into the Vietnam era. It would be more realistic and educational for writers and directors to show the bigotry, prejudice and social struggles of the 19th century without the suggested morays of the 21st century influencing the film.

Some of the more minor issues noted in the film were the logistics. Blocker and his companions traveled by horseback from New Mexico to Montana in 1892. They could have traveled by train in a shorter amount of time. Blocker and his group also set up a lavish camp each night with six tents, chairs, tables, cast-iron cookware, oil lanterns, etc., while traveling with only two pack mules.

There aren’t a lot of guns cast in Hostiles, but in reviewing those shown in the film, you’ll find several technical and questionable tactics. First up, we need to look at the oldest guns cast in the film. Blocker’s soldiers are predominately armed with 1859 Sharps carbines, and at least one soldier carries a Spencer carbine. The 1859 Sharps would have been obsolete and out of service by 1864. This holds true for the Spencer rifle as well. It is more plausible that Blocker’s unit would have been using Springfield Trapdoor rifles, or Krag-Jorgensen rifles.

Westley Quaid (Scott Shepherd) is cast with the Winchester Model 1866 and sets the storyline for Rosalee Quaid. The Model 1866 is a well-known rifle thanks to Westerns, and it’s still quite popular among Cowboy Action shooters. It was originally chambered in .44 Henry rimfire and earned the “Yellow Boy” nickname because of its bronze/brass alloy receiver. The Model 1866’s rugged construction and lever-action design ensured it was manufactured until 1899.

But in the film, the context in which the rifle is deployed is ridiculously orchestrated. The scene involves Westley Quaid working at home when six Comanches approach. He has built an incredible log home that almost resembles a fortress. Quaid runs inside of the fortress-like structure, grabs his Model 1866 and tells his wife, Rosalee, to execute the plan they had arranged if they were attacked. The plan is for Rosalee to take their three young girls and one baby and run to the top of the ridge behind their house. So, Rosalee leaves the cover of the fortress-like home and heads for the open space. Which is unbelievable in its folly.

Rosalee exits the back door, exposing herself and the children to hostile engagement. Westley Quaid runs out the front door towards the Indians, firing several shots while running with the rifle. The Comanches on horseback quickly shoot Quaid and scalp him. The absolutely idiotic scene was more then likely created by writers to move the story forward quickly. But for gun enthusiasts, the lack of common sense makes the scene unrealistic.

Another iconic gun cast in the film is the Colt Model 1873 Single Action Army, or Peacemaker. Blocker carries two of these 7½-inch-barreled Colts and uses them several times throughout the film. He shows a very respectable display of gun-handling abilities throughout several confrontations, leading viewers to believe he’s a calm but hardened soldier with lots of experience.

Blocker also utilizes a Winchester Model 1873 saddle ring carbine. It is probable that a captain in the U.S. Army would have a Winchester rifle. Many officers purchased their own rifles for use on the Western frontier. The Model 1873 was an excellent long gun used by many in the late 19th century. The shorter saddle ring carbines were handy with light recoil, which proved excellent when working from horseback. They provided adequate ballistics for dealing with two-legged predators and held enough of ammunition to complete most tasks.

Winchester manufactured the Model 1873 from 1873 to 1923. It was originally chambered for the .44 Winchester Center Fire (WCF), or .44-40, which was the first centerfire cartridge to become popular on the Western frontier. Winchester late offered the Model 1873 in .32 WCF and 38 WCF—cartridges that became popular for handguns in the late 19th century. This allowed users to carry one caliber of ammunition for both handguns and rifles. But it’s worth noting that the original Winchester Model 1873 was never chambered in the famed .45 Colt, a proprietary cartridge owned by Colt. Also, the standard barrel length of 24 inches was most popular in the late 19th century. However, Winchester made rifles to order in any barrel length, including longer barrels or carbines with barrels as short as 12 inches. In all, Winchester made more than 720,000.

Also shown in the film is a Winchester Model 1886, which had a considerably stronger action than the previous models of 1873 and 1876. John Moses Browning designed the 1886 so it could chamber heavier rounds. In fact, the action was so strong that, when smokeless-powder cartridges were introduced, only a nickel-steel barrel was needed in the design. Winchester produced the rifle from 1886 to 1935.

The films shows the Model 1886 when fur hunters kidnap Elk Woman (Q’orianka Kilcher) and Living Woman (Tanaya Beatty). A hunter comes out of his tent holding a Winchester Model 1886. The right side of the receiver identifies the 1886. As the camera angle changes, the rifle appears to switch to a Winchester Model 1876. The sliding dust cover on top of the receiver and the right-side receiver cover plate identifies the 1876. When the camera angle changes again, the gun switches back to a Winchester 1886. This is poor continuity on the part of those involved in the production.

The film Hostiles captures one soldier’s journey and reveals the impact war can have on the human psyche. The story dramatically demonstrates this internal strife of exposure to violence and brutality. Moreover, love and family are the only concepts that can start the healing process.

Christian Bales’ performance is masterful, as with the other actors. But with any film set in the late 19th century, there are some historical perspective and technical issues. The director focused on the story’s emotional drama and less on the historical accuracy with the guns and gear. With modern-day Western genre moviegoers being well educated on the subject, the clothing, guns and gear need to be accurate.

This article is from the Winter 2019 issue of Guns of the Old West magazine. Grab your copy at OutdoorGroupStore.com. 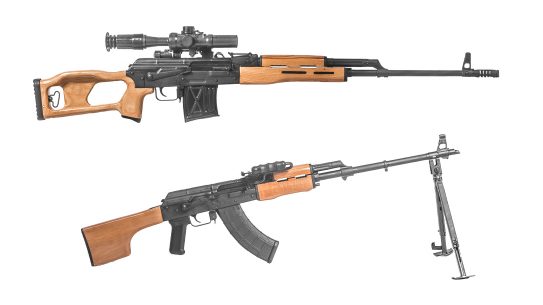 Back by popular demand, Century Arms is importing Romanian-produced AES10B rifles in 7.62x39mm and...