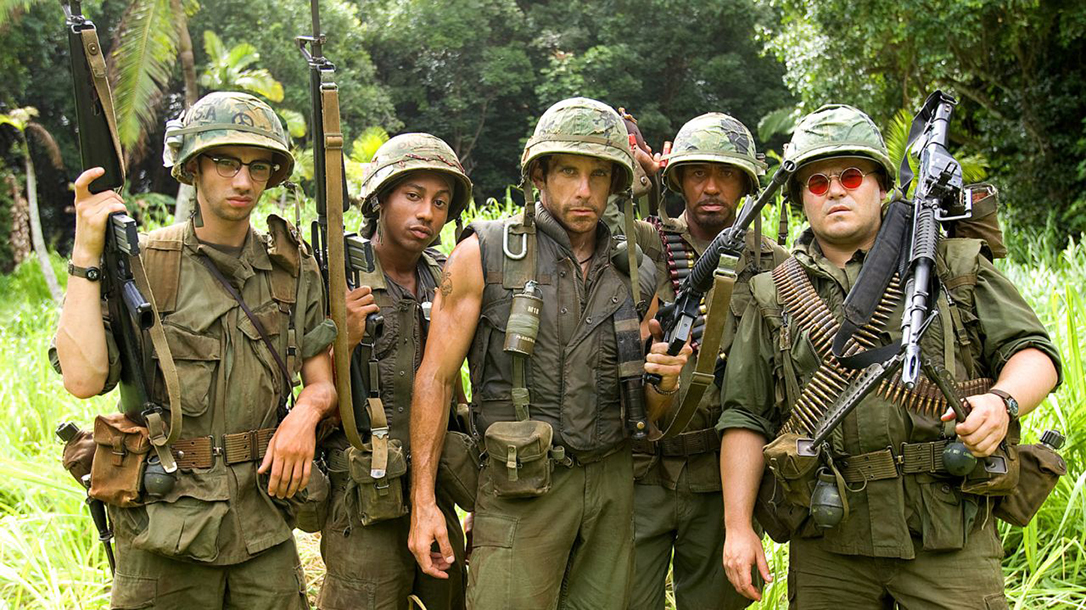 This article was originally published by Free Range American on March 16, 2021. For more stories like this, visit freerangeamerican.us.

The mission of Tropic Thunder is to make fun of all Hollywood war movies, especially the ones that try to re-create the magic of Platoon (1986) or Saving Private Ryan (1998) by assembling a cast full of recognizable names, no matter how illogically chosen, with a huge budget and a director who doesn’t really know the subject matter. Tropic Thunder is also, specifically, a sendup of Vietnam movies. It even has a POW camp rescue plot.

At the same time, it also makes fun of documentaries about remarkably horrible behind-the-scenes filmmaking stories, like the one about how making Apocalypse Now (1979) almost killed director Francis Ford Coppola, Heart of Darkness: A Filmmaker’s Apocalypse. There’s even a hilarious evil movie producer played by Tom Cruise in heavy makeup with fake, hairy forearms and hands.

If you’re new to Tropic Thunder, the unrated director’s cut is the version to watch. There are just too many characters and hilarious bits missing from the theatrical version. Specifically, the characters are all set up a bit better in the longer version, and that just makes the later stuff funnier. So, crack open a Booty Sweat, unwrap a Bust-A-Nut bar, and let’s get into it:

1. The opening to the fake movie within a movie is a nod to every and any Vietnam movie that features a good tracking shot of Hueys flying low over a jungle with a very 1960s song playing over it. In this case, it’s “Ball of Confusion” by The Temptations. Playing a Doors song or “Ride of the Valkyries” would have been too on the nose.

2. During the battle scene, we get another war movie trope: the radio operator is shot in the head while calling in an airstrike. The radio guy always gets it. Hell, even when Brooklyn picks up the radio he catches a bayonet to the guts … a lot.

3. Throughout the entire opening sequence, the characters are just yelling Nam-movie military slang, often not making a lot of sense while doing so — a theme they continue throughout the movie, especially Tugg (Ben Stiller). Also, every character is very clearly a war-movie stereotype. They have a guy from New York City who everybody calls Brooklyn, for f*ck’s sake.

4. When we see Tugg Speedman for the first time as Four Leaf, the movie makes its most direct reference, a hilarious squib-fest re-creation of the famous death scene of Sgt. Elias (Willem Dafoe) in Platoon. He gets shot, like, 40 times … and totally lives. Tugg repeats the arms-up pose during the bookend scene after the big bridge explosion near the end.

5. The soundtrack behind the Platoon scene is hilarious. It’s a soaring score that becomes dominated by a female voice singing nonsense wails to a pretty and sorrowful melody. You got this in a ton of late 1990s and early 2000s movies, like Gladiator and Tears of the Sun. Parts of the Black Hawk Down score sound a bit like this, too.

6. Staff Sgt. Lincoln Osiris earnestly exclaiming, “Survive!” to Four Leaf is just a great jab at every time a movie character has yelled, “You can make it!” or “Come on, you can do it!” to a buddy under gunfire, distilled down to the worst possible way of expressing it. It’s pure gold.

7. There’s always got to be a guy hanging from a helicopter skid by one hand, because that happens all the time. “This harness is really digging into my ass!”

8. The Linc and Four Leaf “hand-holding” conversation itself is a full-throated jab at the many, many emotional-speech-while-dying scenes in war movies.

9. “Ain’t nothin’ but a thang,” from Lincoln is another bit of slightly mangled Nam vernacular, but also a solid nod to the Vietnam classic from the ’80s, Hamburger Hill.

10.  “Why’s a man got to pick up sticks against another man, instead of using them sticks to prop a man up?” That might as well be right out of the script for The Thin Red Line (1998).

11. Kirk (Robert Downey Jr.) calls Tugg “Action Jackson,” the titular character in a very underrated Carl Weathers action movie made when he was trying to lean into the action genre after his post-Rocky success in Predator (1987) the year before.

12. When the actors are being flown into the jungle on a helicopter to begin their guerrilla filmmaking experiment, Tugg pulls a plastic grenade full of M&M’s from his camo Tropic Thunder gift bag and offers them around the chopper. This might be a stretch, but I took this as a nod to the chewing tobacco scene on the chopper in Predator.

13. Cockburn, the director, really loves saying “Charlie” and calling the guys “maggots.” I think he watched Full Metal Jacket (1987) AND Apocalypse Now the night before.

14. “I got a bad feeling on this one.” Some might take this as a Star Wars reference, but man, do they say this a lot in action movies.

15. During the ambush, Tugg performs pretty much every stereotypical action-hero gunfight move there is. He just runs out into the open under fire, shooting blanks from the hip in full auto, does a roll for absolutely no reason, and even fires one-handed in a hilarious kind of “come get some” gesture. The rest of the cast follows suit, of course. Tugg even pulls the pin from a grenade with his teeth.

16. As the guys make their way through the jungle, the low shot of the actors walking past the camera has to be a nod to the famous shot from Platoon of silhouetted soldiers heading into the jungle on a night ambush.

17. At the river, Tugg dramatically and unnecessarily works the action on his Colt Commando (actually a Colt Sporter II) for emphasis, something you see all the time in movies, especially with pump-action shotguns. That’s right before Kirk goes into his bit about Tugg’s physique in comparison with Rambo’s.

18. Every time the group comes across an open field, they walk right down the middle of it. This makes for great shots, for the same reason it makes for a great way to get shot.

19. Kirk, as Osiris, starts talking about how he was “a saucier down in San Antone,” a clear reference to Chef in Apocalypse Now, who talks about being a saucier in New Orleans before going to Vietnam.

20. Tugg is wrapped in a towel hunkered down in a rainstorm as he hears something approaching in the darkness — I take this as a nod to the ambush scene in Platoon.

21. Immediately after, Tugg kills the creature with a knife before discovering it’s a panda. This feels a lot like the scene in Predator when Mac (Bill Duke) stabs the boar thinking it’s the alien.

22. After Tugg is taken prisoner by the heroin manufacturers, his captors tie his wrists to a yoke and repeatedly dunk him in a river as he frantically yells for the dead director to cut. In Rambo: First Blood Part II (1985), Rambo is captured and tied to a yoke the same way, though he’s dunked into a sewage pit instead of a river.

23. Kirk and Sandusky look at the night sky and talk about how small the stars make them feel, just like Taylor (Charlie Sheen) and Elias in Platoon.

24. Sandusky and Kirk rising from the water in full camo face paint is a reference to Apocalypse Now when Sheen does the same thing, and to a lot of other action movies where spec ops guys slowly emerge from still water with epic coolness.

25. Ah, it’s really an action movie now that the Lead Farmer scene gives John Woo a shoutout by having Kirk firing two guns in full auto, one in each hand.

26. When Kirk finds Tugg in the camp, he’s clearly gone ’round the bend and is giving off some serious Col. Kurtz vibes from Apocalypse Now. Kirk trying to talk him down and the dudes beginning to emerge is kind of like Michael (Robert De Niro) trying to talk Nick (Christopher Walken) into coming home in The Deer Hunter (1978), only really, really stupid.

27. For whatever reason, the giant pile of heroin Jeff (Jack Black) finds in the camp is shaped like Devils Tower in Wyoming, a nod to Close Encounters of the Third Kind.

28. When Cody (Danny McBride) blows up the first guard tower, as it falls, there’s the unmistakable sound of an Alien screech from Aliens. Again, no idea why, but it’s there.

29. After a rocket-propelled grenade hits their truck, Tugg looks around and everything is slightly slowed down and the sound has dropped to a faraway echo — just like the often emulated effect from Saving Private Ryan meant to simulate being stunned after an explosion. It’s somehow less impactful with Jack Black rolling around in a short tunic screaming, “My ass! My aaaasssss!”

30. When the bridge blows up behind him, Tugg is blown forward by the explosion and then sideways by a second explosion while still in the air, as if he’s being tossed around by the ocean and not concussion waves. This is nearly identical to a scene where Ethan Hunt (Tom Cruise) is tossed around by explosions the same way in Mission Impossible III. There’s no way he doesn’t have soft tissue damage. 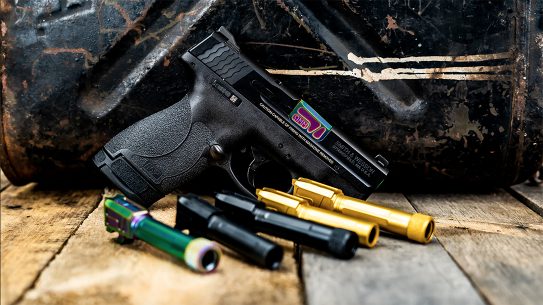