by Brian Jensen
in Training
0

7
SHARES
28
VIEWS
Share on FacebookShare on Twitter
As you enter the commercial building tucked into the Southern California community of Lake Forest, your adrenaline is running. As has seemed to happen so many times recently, your call is for a person with a gun shooting indiscriminately. As you make your way around the dark expanse of the massive room, your eyes are sharp, and you listen for any telltale sounds of your suspect. Finding an open room nearby, you enter, and your whole world explodes.

Wounded people are everywhere, and from an open door, a man with a gun emerges. The explosive sounds of gunfire fill the room, making even the floor shake. Your sight picture is good, and you engage in a battle to end this latest active shooter call. In the midst of this, a searing pain hits your side, and you drop, hit by the suspect, while your partner ends the killing spree with a shot to the head.

Silence fills the room until you hear, “OK guys, what did we learn?” The room’s lights come on, and you get up, ending yet another training scenario. This wasn’t for real, but it sure felt like it. You are in the Artemis Defense Institute’s VirTra V-300 system, a 300-degree training simulator.

“The Artemis Defense Institute offers some of the most life-like scenarios in training.”

Back in the day, we had firearms simulators to train officers, and for their time they were pretty revolutionary. Videos on the screen with real-looking suspects in real-life scenarios trained my era of police officers to deal with all manner of scenarios. These systems, and their descendants, are still in use today.

Artemis Defense has taken that idea to a whole new level with the latest technology and is using it to train people in the law enforcement, military and civilian worlds. 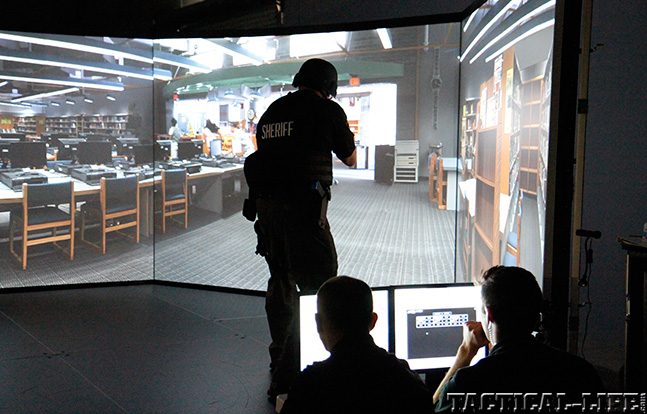 Artemis, owned and operated by Steven and Sandy Lieberman, is a young company that began in 2013. In an attempt to bring firearms training into a different arena than just the realm of the firing range, the company utilizes three VirTra training systems, the V-100, V-180 and V-300 (all corresponding to the angle of engagement).

In the Artemis facility, or “lab” as they call it, all three systems are set up for different training scenarios. The VirTra V-100 is reminiscent of the old single-screen firearms scenario trainers we are familiar with. The V-180 gives you three screens with forward and side-angle threats. The biggest is the VirTra V-300, and it’s as close as you can get to a full 360-degree, virtual shoothouse.

As for trainers, Artemis’ staff comes from all walks of the firearms arena. Law enforcement, military and civilian experts bring their experience to the classroom at Artemis, and their own perspective. Artemis also has a “train the trainer” program to train an agency’s staff to facilitate training in their lab.

“It doesn’t stop your stress or even lower it—it teaches you to fight through it.”

The system uses numerous interactive videos, all filmed based upon current law enforcement, military and civilian deadly-force scenarios. Artemis will even work with the end-user to create scenarios for their specific areas. The company can simulate Middle Eastern landscapes, a school in Southern California or maybe a street in your city. Even fellow officers of your own agencies can be incorporated into the simulation as a “virtual cover officer.”

In Artemis’ lab, training is done with retrofitted Glock 22 pistols (the most commonly found duty pistol) that use compressed air to simulate recoil while firing. The “magazine” must be reloaded, as with any other gun. These can be customized to match the capacity of the visiting agency’s duty weapons. In addition, there are adaptors to put in your department AR-15 that will allow it to work with the system as well.

In all this, Artemis still takes safety seriously. They have clearing barrels that they want their simulated weapons cleared while on site. Good habits are reinforced throughout the facility for real weapon handling.

But the single most impressive part of the company’s gear is the part that makes this some of the most realistic training out there. It’s called the VirTra Threat-Fire. The Threat-Fire is a device that attaches to your belt and give you a 0.03- to 2.5-second electric jolt at around 80,000 volts. This happens when you’ve been “shot” by incoming hostile fire in scenarios. It isn’t harmful, but it sure will let you know when you’ve been “hit.” In my book, pain is pain, and it’s as close as I’ll want to come to the real thing. (Artemis’ Lieberman says that electricity is a fundamental and universal human fear or phobia, adding a little more to the stress.)

What’s more, being “shot” doesn’t end the scenario, unlike in other simulator training. Artemis wants you to fight through the hits to survive the encounter. You may be hit, but there is no “game over” until the bad guy is down. This teaches us a valuable point: Being shot doesn’t mean you’re out.

During my visit with Artemis Defense, I saw a unit from a large Southern California police department go through training there. I was not disappointed. This unit went through multiple scenarios, and the stress created, though artificial, was very real for them. More than once I heard someone yell an expletive or two and then, “I’m hit,” when shot by the “bad guy.” Partners covered partners while they reloaded or returned fire and conducted officer rescues.

d lead instructor for Artemis. He and his wife, Sandy, were first introduced to the VirTra system in Arizona in 2012 and immediately saw a great business opportunity for their Southern California location, where shooting ranges are sometimes hard to locate and build. They saw it as a great opportunity to bring shooting and firearms to new shooters in the general public.

So, while the initial goal was to bring this to civilians, in April 2013, Artemis was surprised by the interest shown by local law enforcement early on when it was approached by Orange County agencies. Soon, the Orange County Sheriff’s Office was engaged with the use of the VirTra systems for their training. In short order, other agencies, even the LAPD, began coming to Artemis.

The Artemis Defense Institute offers some of the most life-like scenarios in training. It creates a situation where you can get a real idea of the stress you’ll be un-der when things turn bad. This is really as close to real life as it gets without getting in harm’s way.