“When someone attacks you, you have two options: become a victim or become the victor,” said Chris Caracci, former Naval Special Warfare Development Group (DEVGRU) member and proponent of alternative-force tactics. “I like teaching people how to survive a deadly situation.

“I’m not into creating victims, and I’m surely not about losing,” Caracci said. 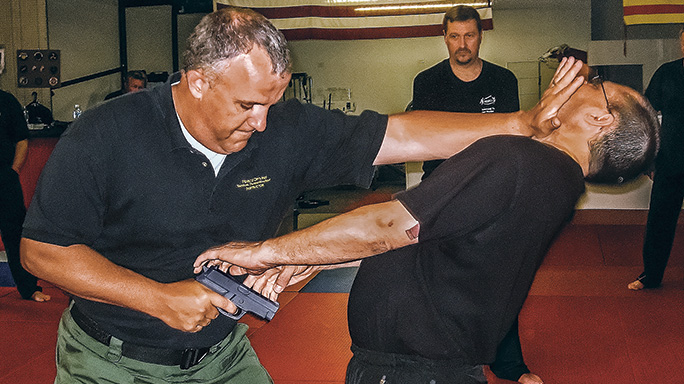 “Every person walking around has to ask themselves, ‘If I’m targeted for an attack, am I ready?’ Many people come back with a no, and I see them in my class. The first step of any improvement is realizing what you don’t know.”

To understand Caracci, you must first understand his mindset and what makes him tick. “From a young age, I enjoyed physical sports, including hockey, football and martial arts,” he said. “I trained in classic karate and developed an interest for learning different fighting styles.”

Caracci pushed himself to the ultimate test. “I’d heard about SEAL training and what was involved,” he said. “I decided then and there that I wanted to be part of a group like that. So after high school, I enlisted and targeted the SEALs.”

SEAL training takes you to the brink. But the most important part of SEAL training, and what Caracci describes as central to self-defense, is mindset. “Your mindset is the key to everything,” he said. “If you want to achieve anything or win, it’s your mindset that will carry you through. People often ask what’s the secret to getting through Basic Underwater Demolition/SEAL training. The simple answer is your mindset.”

So what exactly is alternative force? “People who do not appreciate the necessity for alternative methods of self-defense are limited and thus forced to manipulate a situation so they can be successful with only the tools they know,” Caracci said. “On the outside, this does not seem to be an issue, but if all one knows and relies on is a gun, that’s all they will use.”

Many years ago, Chris developed and coined the term “alternative force” as a way to teach other force options to military and law enforcement personnel. “It seemed to me that our tactics had become very rigid with few options,” he said. “For law enforcement, you had a gun and a baton, and that was pretty much it. Every situation, though, might not require a baton or gun, yet we were forcing officers to use Choice A or Choice B, and that was a recipe for problems. The concept of alternative force was born out of the need to find and use other options in a use-of-force situation. Over time, I’ve been able to cater some of this for use by anyone.”

Alternative force is essentially using outside-the-box thinking when dealing with a situation. It’s a way to create more options when it seems like your options are limited.

“I met a man recently, a former athlete, who suffered from a traumatic injury that left him somewhat insecure about his ability to protect himself and his family,” Caracci said. “He told me about his recent road rage incident and how he ended up using his gun to thwart the antagonist. I told him that he should have never allowed a situation to exist where his only recourse was to use a gun and thus create a life-threatening situation from one that might not have originally existed at all. The fact is, there are plenty of viable self-defense techniques, even with a physical disability, that would have worked.”

For alternative-force tactics, it’s crucial to understand how the reactionary gap can give you time to think and react.

To Caracci, having options when you are close is critical. “Statistics indicate that most shootings occur within arm’s length, yet few people learn or are instructed in well-thought-out methods to be prepared to engage and handle the dynamics within that close proximity of lethal force,” he said. “Distance can often dictate tactics, and when you are close, different tactics come into play than when you have room to maneuver.”

“There are other reasons for learning such techniques, including the capability to use different hands to open doors or negotiate past dangerous or dark areas. The ability to control an adversary or innocent individual is also paramount to surviving.”

Caracci also said people often mistakenly view a fight or self-defense as a linear event. “There are no rules in a fight, and you have more to employ than just fists,” he said. “The body is comprised of several striking points, from elbows to knees to the head. But ultimately, if you can move, you can’t be hurt.”

“A moving target is one of the most difficult things to hit. It’s even more difficult if the target is moving fast,” Caracci said. “That goes for a fight or a gunfight. If you can move and avoid the damage, you survive. I never advocate standing still or linear tactics. The world is three-dimensional, so you should use all of those dimensions to survive.”

With the attention on use-of-force situations, there has been a call to train law enforcement to use different tactics in such situations. All police interactions are dynamic, and Caracci believes law enforcement could benefit from expanding its toolbox.

“Today, police officers have a gun, a Taser, pepper spray and then an intermediate weapon. These items can aid them in a use-of-force incident, but if an officer does use them, at some point a de-escalation of the situation will happen, and an officer must be prepared to handle that. As a law enforcement officer, the most unique role in society, the ability to raise and lower their force level to handle a situation directly correlates to their role as a peace officer. In any situation, lethal force should always be a last resort.

“For SEALs, this type of alternative force becomes relevant in the worst possible scenario: a hostage rescue. That requires the team members to have a gun ready for lethal force but also know that we might need to use alternative-force methods on innocent people or noncombatants without relinquishing the ability to utilize lethal force, which is the same dynamic law enforcement professionals operate in every day.”

Always Have A Plan

The most basic premise of surviving any potentially lethal encounter is to plan, prepare and execute. Many people often forget this and don’t have the most basic “what if” plan. Without such a plan, when something occurs, they freeze and are unable to decide what they can or should do. Alternative-force training gives confidence to people to let them plan, prepare and execute a plan based on proven training principles.

“What happens if you are justified to use lethal force as a civilian or a professional, and now even though you might have hit the mark, the threat keeps coming? Maybe your gun malfunctions or breaks down? There are so many more reasons to have an alternative effective plan and be prepared to execute it.”

“I am showing people how to not just survive but strongly and responsibly survive any situation they could be confronted with. It’s not about winning or losing. This is not a sport. I can’t accept a loss in this situation because here there is no second place. These events often come once in a lifetime, where one cannot confuse effort with achievement. My alternative-force classes are geared toward people who want to better protect themselves at extremely close distances and survive.”

You can learn a lot from Chris Caracci’s training classes. “The first step of any improvement is to think differently, create a plan and always understand that the mind controls the body. And if you can master the mind, the body will perform.”