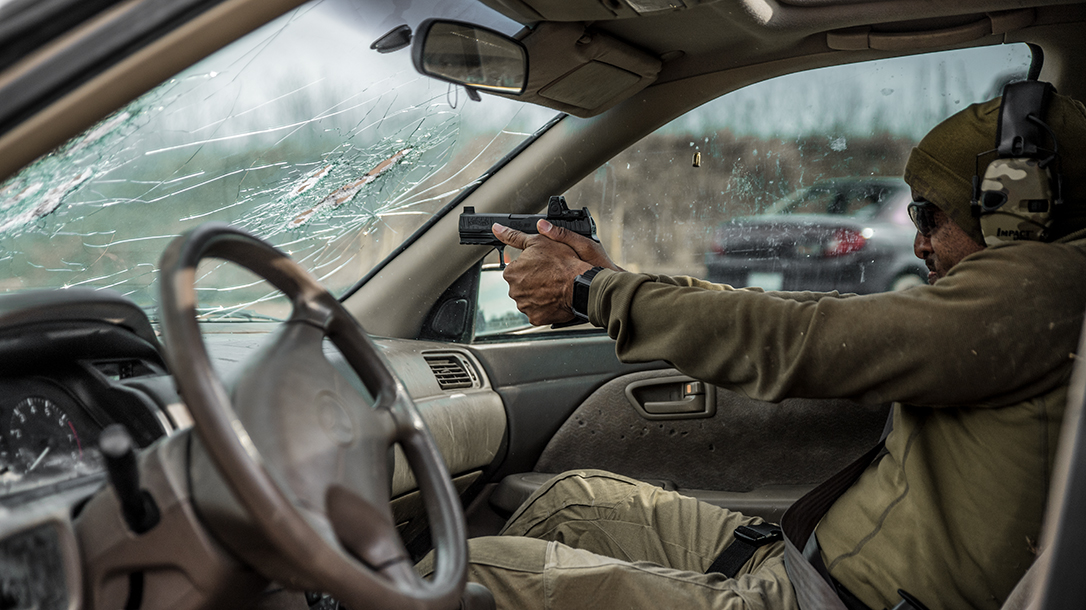 These are words I’d use to describe the engagements we practiced at the Centrifuge Training VCQB (vehicle CQB) course in Texas recently. They were demanding yet fun. That sounds appropriate for anyone who finds themselves cornered in a vehicle in a bad place, far away overseas, right? I had no idea that bad place would become countless highways and street intersections across the United States. Vehicle CQB (close-quarters battle) is a real thing, and might be necessary training for an evolving threat.

Many of us watched videos as large crowds of angry people stopped cars and threatened the occupants inside. Sometimes they would even beat on the cars with rocks, bats and other melee-type weapons. Jumping on cars, they refuse to release even when whisked down the highway, still attached to some frightened person’s hood. We watched guns pulled on people who likely just wanted to get from point A to point B, by aggressors with no motive other than to intimidate and bully others into doing their will. We saw people drug from their vehicles and beaten—some losing their lives to this or run over. City officials and politicians allow this to go on, and the police are basically powerless. It’s painfully evident that vehicle CQB training is anything but a novelty in the United States these days. It’s a sad necessity.

Our trainer, Bryan Veliz, an active-duty officer, communicated many interesting facts to us and important pearls to consider and remember. Such as: While out and about, depending on where you end up geographically, the vehicle might be all you have. While we all want to get to safer, more solid cover, it might not be possible.

They taught the class with a calm “matter-of-fact” approach. They backed up the techniques with evidence—free of “war stories” that seem to plague many such courses. Centrifuge Training has a broad video database that the instructors use to “form patterns” and drive their training. We were shown videos and asked to analyze what we thought was happening and how the situations could be handled. This drove home the massive complexity in all deadly-force encounters and the need for higher education and comprehensive training.

Our class started with some short-lived general pistol work. We then went into the positional mechanics of Vehicle CQB. They stressed four main positions. First was adopting a more aggressive offset, in stance, pushing the support-side leg further out to better respond to situations. This is better than standing straight up and down. This slight exaggeration in stance allows you to squat faster for more efficient movement to and behind the cover of the vehicle, using various points of the vehicle for cover, such as the A, B, C and D pillars.

The next position is kneeling, and the technique shown was very effective, building upon the stance we had created earlier. You simply use your front leg to lower your body while pushing the rear leg out further, and get the inside of your knee on the ground. It’s a bit awkward at first but is very stable when executed correctly because you can get a wider base to your kneeling position. The last position is laying down on your side, which allows you to shoot under the vehicle. But you don’t just lay down—your leg that is off the ground rolls forward giving you stability and the ability to move around.

We were given a live-fire demonstration on how effective a vehicle’s various pillars are on stopping incoming rounds. The instructors shot the A and B pillars with different calibers and ammo types, including slugs and 5.56 to show us how ineffective bullets can be against certain barriers. For those inside the vehicle, these hard points are good. They can also be effective outside the vehicle when using it for cover, especially when you learn to “stack” the pillars to maximize your cover.

Bryan used an AR-15 to shoot into a B pillar. It took over 20 rounds of concentrated fire in the same place to pass through side to side on a Dodge Neon. He also showed us the effects of shooting through windshields. Bullets change trajectory upon impacting a windshield and knowing that trajectory is important for outcomes.

I recall years ago when the temple index was introduced to the inter-web, and commandos—both keyboard and otherwise—lost their minds over the technique. At first glance I could see why. You place the pistol up against the side of your head, while moving. It seems a bit scary but allows the operator the ability to move, while keeping the muzzle off partners or others in the vehicle. This was made clear to us by a demonstration where Bryan showed us the Casull technique and the traditional “muzzle up” technique. The potential to flag someone was high with these techniques when in close proximity to others.

The temple index is done by simply bringing the pistol straight up and placing the strong side thumb against the cheekbone area. This automatically places the pistol in the correct position. The type of hearing protection you use might affect this positioning, and you’ll need to modify it to keep from blocking your peripheral vision. The muzzle stays straight up, not pointed in or out, and the elbow stays tucked tight against the operator’s body. It takes a bit of practice, but it’s beyond useful and effective. “Your environment dictates your working space,” Bryan told us. “You may not always be able use certain techniques under certain circumstances.” He made this point by showing us how a mag change executed by you could become really hairy for your partner under the right conditions.

Next we moved on to vehicle interior techniques, learning how to shoot from inside the vehicle from various angles and other movements such as removing your seatbelt and exiting the vehicle. Here we utilized other types of indexing, which is just placing the pistol in a way that keeps the muzzle securely in a safe direction. For instance, press the muzzle of the pistol against the center of the steering wheel or dashboard when working with another operator inside the car. Indexing allows you to look around and assess without muzzling yourself or others under stress. If you’re not shooting, you should be “looking for work,” as there is much to do in such a situation.

As you might imagine, communication between partners is of utmost importance and this was stressed throughout the course. If your partner’s pistol runs dry, you might have to cover their side of the vehicle while they reload—this means you’ll need to safely get your pistol across them to address threats outside their window. This is accomplished through indexing and communication.

Once outside the vehicle, communication can’t fall by the wayside, and you and your partner will need to effectively move around the vehicle together, using it as cover while addressing threats. Here, your positions will be key, and staying close to each other is necessary to ensure a safe working environment.

These exercises are definitely for advanced shooters and those who are serious about effective threat management. Many of us performed these drills partnered up with people we hadn’t met until this class—never having fired a round with them in the past. Amazingly, due to the incredible instruction, I never felt uneasy about any of it. It was clear that the attendees were capable, competent, and focused on safe and effective use of their pistols. This was inspiring to see.

Not Your Everyday Vehicle CQB Class

After working around the vehicle we made our way from vehicle to vehicle with specific drills meant to make us think about efficient movement and proper use of cover, while achieving accurate hits on targets, alongside situational awareness and malfunction clearing. The Centrifuge Training VCQB course is mentally draining and physically exhausting. These stressful factors can easily cause one to become complacent and sloppy, but our class maintained a safety composure that others typically don’t. As a result, we were introduced to many advanced techniques that might not be covered in the average class.

It had been many years since I’d been to such a high-level pistol training iteration. I had forgotten how fast and furious personal defense can be in a confined space and with shortened distances. But I found it to be rewarding and enjoyable. It’s serious stuff not to be taken lightly.

If you had told me in February that just a month later, a series of events would lead up to the likelihood of needing such intensive training for the real world, in our own neighborhoods, I wouldn’t have believed it. But the evidence is in front of us. If you’ve let your training slip, get back on it. If you’ve never completed a viable, professionally run training course, get it done ASAP. You never know when or where you’re going to need the skills. While home-defense is of utmost importance, vehicle close-quarters battle should be at the forefront of the prudent, law-abiding citizen’s mind. And the Centrifuge Training LLC VCQB course should be on the top of your list. For more information, visit centrifugetraining.com.

This article is from Tactical Life magazine, December 2020 issue. Subscriptions are available at OutdoorGroupStore.com. For more information, please visit CentrifugeTraining.com.