Most Americans still think of shotguns as “scatterguns,” but shotgun tactics and technology have evolved rapidly over the past several decades. So, while most people realize that shotguns are extremely effective, they don’t understand how to set their gun up for personal defense or how to use it to maximum effect.

This year, the annual Rangemaster Tactical Conference included a three-hour block of instruction called Defensive Shotgun that was taught by Tom Givens. In over 40 years of combined law enforcement, security and firearms training experience, Tom has learned to separate fact from fiction when it comes to the defensive use of a shotgun.

One belief that isn’t fiction is that shotguns are very powerful firearms. Because of this, Tom provides some very specific instructions for handling shotguns that go beyond the four basic rules of firearms safety. First, he makes it very clear that there are almost no minor shotgun injuries. As Tom puts it, “You rarely see someone with two shotgun wounds.” Therefore, he uses a three-part checklist for confirming that a shotgun is unloaded: check the chamber, shell lifter and magazine tube. In addition, he strongly recommends not owning both 12- and 20-gauge guns, and being very careful to segregate 12- and 20-gauge ammo if you do have both. 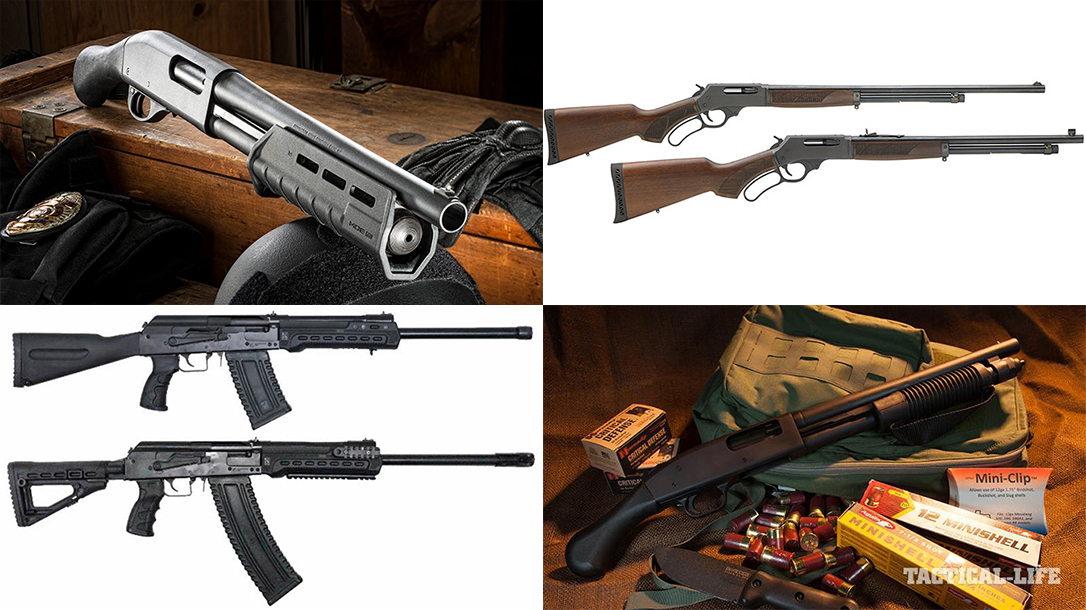 A 20-gauge shell will load into a 12-gauge gun, and fall into the barrel rather than stay in the chamber. When the gun fails to fire, a 12-gauge shell can be chambered behind the 20-gauge one, and the gun will explode when the trigger is pulled. This isn’t hypothetical. A friend of mine did this with a Winchester Model 12 about 40 years ago. Lastly, Tom always carries the shotgun muzzle up with the chamber open unless he’s expecting that he may have to shoot quickly.

Then there’s the “scattergun” myth. Shotguns just don’t spray pellets; they must be aimed. With modern ammo, the normal shotgun pattern at 5 yards is about 1 to 2 inches. At longer distances, the size of the pattern will largely be determined by the choke on the barrel and the design of the shotshell being used. The old rule of thumb stating that shotgun patterns increase an inch for every yard the pellets travel is just not true. Instead of relying on a false belief, go out and pattern your gun with your chosen ammunition to determine the maximum distance at which your gun/load combination can keep all of its pellets well within the target’s torso.

When the pattern gets wider than that, pellets start missing and a shotgun rapidly loses its stopping power. The maximum range that most shotguns will keep all pellets patterning in the center torso is usually under 25 yards. In addition, be aware that shotgun pellets that miss can be a real threat to bystanders. I’ve seen large deer killed by a single pellet of 00 buckshot at over 70 yards.

Speaking of ammunition, Tom stated that defensive shotguns are buckshot guns. This runs counter to the old thinking that implied you should load buckshot and slugs alternately in the magazine. The only load Tom recommends for defensive shotguns is a 12-gauge, eight-pellet load of 00 buckshot. He strongly believes that shells loaded with birdshot and smaller buckshot don’t offer as good a combination of pattern density and penetration. In addition, he’s frequently seen 12-gauge, nine-pellet 00 loads throw one pellet out of the main pattern due to the way the pellets are stacked in the shotshell. It seems that one pellet usually develops an excessive number of flat spots due to shot compression during ignition. The overly flattened pellet has more aerodynamic drag, so it becomes a flyer.

With respect to slugs, Tom stated that hardened lead Brenneke slugs would be his choice if any situation required the use of a slug instead of 00 buckshot. The Brennekes retain their shape when they strike the target and penetrate very deeply. Lastly, Tom believes that the 20 gauge has no role in self-defense. The 20 is not loaded with large enough buckshot for adequate penetration. This flies in the face of the popular myth that the 20 gauge is the ideal “lady’s gun.” From Tom’s perspective, a better gun for smaller-statured shooters would be a 12-gauge pump gun with a shortened stock loaded with reduced-velocity tactical 00 buckshot.

Tom also pointed out that shotgun magazine springs are not as strong as some might believe. So keeping a fully loaded magazine is also a myth, because shotgun magazine springs quickly weaken when the magazine is loaded to full capacity with heavy shotgun shells. Therefore, Tom recommends that the magazine be loaded one shell under capacity when stored in patrol-ready condition. The heft of shotgun shells also requires that pump-action guns be firmly cycled and that semi-autos be loaded with full-power rather than tactical buckshot if they are to function reliably.

Factory-issued, full-house defensive shotguns like Remington’s 870 Police, Mossberg 590s, and Benelli M4s are configured very differently from shotguns designed to hunt fowl and big game. Tom discussed the modifications that should be made to a shotgun that is to be dedicated to defense.

First and foremost, he prefers them to have short buttstocks because the standard stock on most shotguns has a length of pull (LOP) designed for shooting running and flying game. As such, they’re too long to be quickly mounted on the shoulder when a close-range threat suddenly appears. For most short-statuted people, he suggests that the LOP be shortened to 12 inches. For larger people it should be no more than 13 inches. Tom especially likes the Magpul SGA stock, which is already quite short.

Tom also favors short barrels. He likes fast-pointing 14-inch barrels because they make gun grabs difficult. Barrels this short are Class 3 items that require special permits from the BATFE; however, their advantages make permit costs and wait times worth it. In addition, Tom likes replacement forends, especially if the gun’s owner wants to mount a tactical light. Magazine extensions are also on his list of approved modifications. One accessory he doesn’t like is a sling, unless the owner is going to carry the gun for an extended period of time. Inside the home, a sling can become just another handle for an assailant to grab.

Lastly, Tom thinks it’s very important to have spare rounds mounted on the gun. In a real fight you’re probably going to be limited to the ammo in or on your shotgun. He likes butt cuffs as long as they are secured in place (I’ve sewn mine to the rear sling stud). Shells in butt cuffs should be placed brass downward. This is so that they can easily be transferred to the magazine during reloads. On the other hand, Tom has seen side saddles break action pins, so he doesn’t use them. Instead he prefers stack-on cards for the receiver. He places shells brass up in loops he attaches to the cards. That’s because he uses one of those shells to dump into the ejection port in the event the gun is completely empty. Then he loads the magazine from the butt cuff.

A defensive shotgunning course would not be complete without a discussion of shooting techniques. Tom’s preferred shooting stance places both feet shoulder-width apart with the weak-side foot slightly ahead of the strong-side foot. The shoulders are rolled forward, and the shotgun is held firmly in both hands. Tom uses a strong-hand grip that I’ve never seen anyone else use. Instead of wrapping the strong-hand thumb over the top of the pistol grip, he places it on the receiver flat over the trigger finger to avoid the thumb coming back and hitting his nose. He adopted this grip because his thumb would otherwise rest on his nose when using a short stock.

It takes a pretty strong person to hang onto the stock when using this grip, so it’s a good idea for some people and not others. The same goes with his use of the weak hand to operate the action and load the gun. Tom does this so his shooting hand is always in position to pull the trigger. It works great for me when using a pump shotgun. But when I use my Remington 1100 semi-automatic, I find it’s much easier to operate the bolt and loading gate if I use my strong hand. As with everything else, you have to build your defensive shotgun technique around your capabilities with your specific gun. 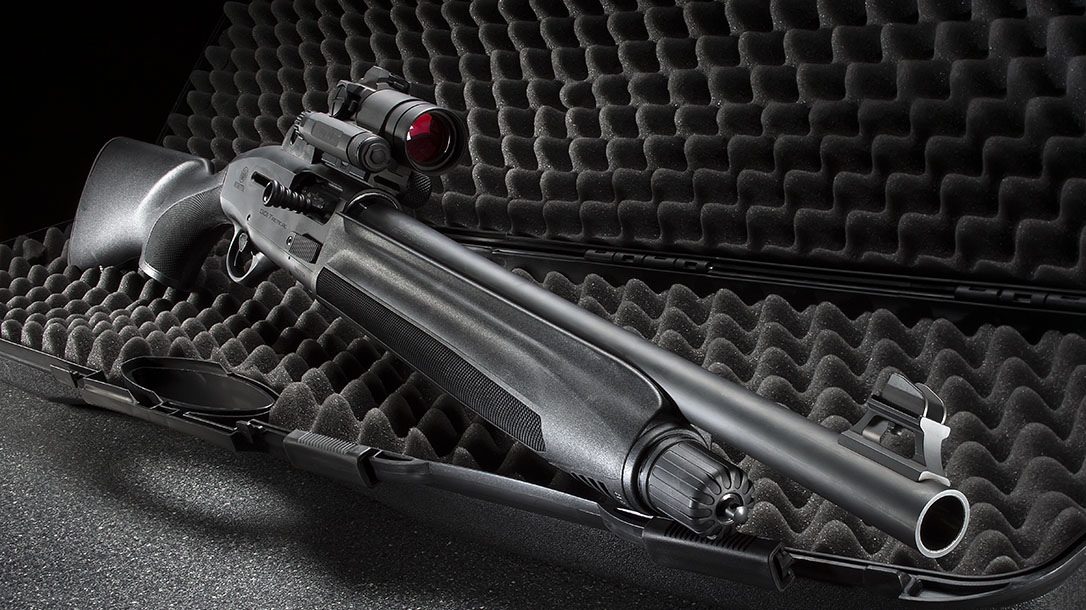 Revamping the Beretta 1301 Tactical Shotgun with a Few DIY Upgrades

When mounting the gun, Tom brings it up to eye level to line up his sights. He does not drop his head down as he raises his gun, as many pistol and revolver shooters do. I tried keeping my head up and found it helps prevent my thumb from hitting my nose and makes recoil from full-power loads easier to absorb. But when raising the gun to eye level, you must remember to keep your elbows tucked down. This is a fighting stance. It does no good to stick your elbows out beyond cover and make them targets.

The last two hours of the Defensive Shotgun block were devoted to live fire. This gave the trainees the opportunity to use their own shotguns to practice what they’d learned. As for guns, the trainees brought a variety of personal guns to the class, including just about everything from pump-action field guns with 26-inch barrels to short-barreled tactical semi-autos.

Under Tom’s direction, the course of fire progressed from taking the proper stance and firing single rounds to firing multiple rounds and reloading. The trainees quickly demonstrated proficiency in implementing Tom’s instructions. By the end of the event, they split into two groups and had a shoot-off in which they demonstrated their abilities to shoot fast, make good hits and keep their guns running.

Any shotgun, even a single-shot, can be pressed into service in an emergency. But personal defense with a shotgun shouldn’t be an afterthought based on outdated myths. An individual should plan ahead and acquire guns and ammo that are either designed or modified for the task and then learn how to use them to their greatest effect.

For more information about defensive shotgun training or the Tactical Conference, visit rangemaster.com.