by Will Dabbs, MD
in Lifestyle, Pop Culture
0

Some things just naturally go well together. Chocolate chip cookies and milk are clearly two halves of a whole. Fast cars and pretty girls are obviously complementary as well. But if you had to ask the typical American gun nerd to combine his two favorite past times — at least those that could be openly discussed in a family-friendly sort of venue — it would likely be guns and Christmas movies. 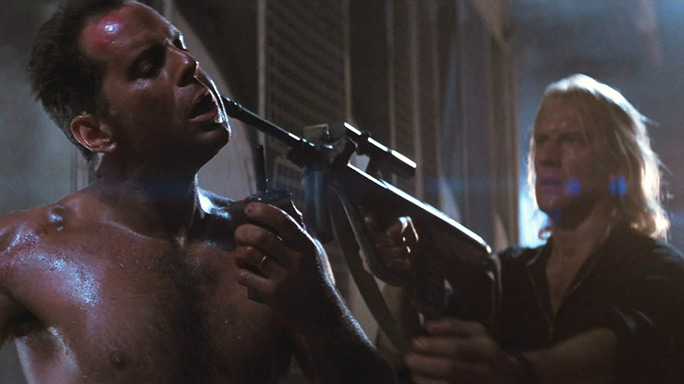 While weapons and Christmastime may seem a bit dichotomous in some circles, they fit together pretty well for me. I enjoy little more than grabbing some popcorn and a cold Coke and settling in for some stylized holiday gunplay at the local cineplex. In this vein, here are a few of our favorite gun guy Christmas movies.

Of course the list begins with “Die Hard.” Don’t even argue it, “Die Hard” is absolutely a Christmas movie. If you’ve never seen this Bruce Willis holiday action classic, drop what you’re doing, surf on over to Amazon and check it out. Do it now. I’ll wait.

“Die Hard” is the story of Detective John McClane as he takes down a well-heeled group of Euro-terrorists led by the despicable uber-kraut Hans Gruber. The film begins at a West Coast Christmas party in an otherwise-empty high-rise office building in Los Angeles. Gruber was played impeccably well by Alan Rickman in what was arguably his best role ever. However, the star that really made a splash in the first “Die Hard” movie was the HK MP5.

MP5s were hard to come by in America back in the 80s. Those used in the film were converted HK 94A3 rifles with their barrels shortened. As a result, they lacked the tri-lug suppressor fittings and paddle magazine releases of the factory machine guns. They were, however, close enough to make me lust after one in a manner that approached unseemly.

The film was chock full of of timeless high-octane lines, but one stands out. Scrawled across the sweatshirt of a dead terrorist were the immortal words, “Now I have a machine gun. Ho- Ho-Ho!”

Willis’ McClane wields his Beretta 92F like he owns it. As Willis is left-handed, the gun used in the movie had a custom extended magazine release and slide catch to help him run the gun quickly and well despite his southpaw disability.

Rickman’s Gruber sports a stainless HK P7M13 that rocks hard. He mounts a suppressor without any external barrel threads, but that happens a lot in Hollywood.

The apex predator among the German terrorists, however, is Karl, played by professional ballet dancer Alexander Godunov. Karl’s feline presence and long golden locks are eclipsed by the full auto Steyr AUG he runs at times one-handed. “Die Hard” also served to introduce us to this sweet piece of Austrian iron.

In the days before Zenith MP5 clones and domestically produced Steyr AUGs, “Die Hard” gave American gun nerds their first proper taste of this epic German subgun and Austria’s radical polymer bullpup. It also showed us what remarkable chaos might be fomented when a desk chair, a computer monitor and a little C4 are taped together and thrown down an elevator shaft.

Despite its super-cool title, “Die Hard 2” was a fairly forgettable film. It clearly surfed on the strength of the first movie, which was, as previously discussed, utterly awesome. In this installment John McClane fights a group of bloodthirsty mercenaries in a D.C. airport also during a Christmas season.

“Die Harder” was actually infamous for a particularly glaring bit of gun guy heresy. This movie introduced the world to the then-revolutionary Glock handgun. While plastic guns are de rigueur nowadays, they were heady stuff indeed back in 1990.

As McClane is attempting to impress upon a local police chief that the mercs they were facing were indeed serious men, he extolled the virtues of the radical handguns they are packing.

He describes their weapons as “Glock 7s … a porcelain gun made in Germany that doesn’t show up on your airport metal detectors and costs more than you make in a month.”

Well, they were Glock 17s, because a Glock 7 isn’t a real thing. The Glock is also polymer, not porcelain, and it is made in Austria rather than Germany. It is additionally quite visible on any metal detector on the planet. Of course, this didn’t stop the Leftists of the day from mounting a massive campaign to have them banned. I suppose somebody should explain to Chuck Schumer and his buddies that movies are not real.

“Lethal Weapon” sold me a Beretta 92F. After seeing Mel Gibson run his Beretta I found that I simply had to have one of my own lest I just spontaneously combust. I actually needed one so badly that I traded a .357 Magnum Desert Eagle for it at a gun show. I know — what an idiot.

“Lethal Weapon” is the tale of a burned out Vietnam-era Special Forces assassin-turned LAPD detective (Gibson) who partners with a long-in-the-tooth, soon-to-be-retired PD veteran and family man (Danny Glover). The resulting charismatic chemistry launched the genre of the buddy cop movie.

Gibson’s Riggs and Glover’s Murtaugh eventually enjoy a friendship forged in a fight to the death with a heavily armed group of ex-military drug runners. The Christmas theme is woven throughout the story arc to include a shootout in a Christmas tree lot and a family holiday dinner liberally peppered with teenaged angst.

Riggs never seems to need a holster for his Beretta, preferring instead to just stuff the thing in his pants. He runs an HK PSG1 sniper rifle like he was born with it. He also tears up Los Angeles sporting a solid-stocked MP5 with a sexy telescopic sight he takes from a demised drug thug.

The best line in the movie results from a competition between Riggs and Murtaugh wherein the older cop drops a .357 Magnum round center of mass in the head of a paper target on the indoor police range. Riggs subsequently runs the target out to the limits of the range and proceeds to shoot, in rapid cadence and with both eyes open, two eyes and a mouth around Murtaugh’s first hole with his Beretta.

Before said shoot-off, Murtaugh incredulously asks if Riggs sleeps with his gun. Riggs responds that he would if he ever slept.

Poor Ralphie, the prepubescent star of “A Christmas Story,”wants a BB gun in the worst way. However, every adult in his life, from his parents to his teacher to Santa himself, helpfully reminds him that should he land the smoke pole of his dreams, “You’ll shoot your eye out, kid.”

One of the reasons “A Christmas Story” so resonates is that the male-half of the audience likely grew up being Ralphie.

No matter your experience level or tactical proclivities, if you own guns as an adult, you likely started out with a spring-action air rifle. Ralphie is everyman. He is that awkward sincere kid who wants to do the right thing but would consider selling his sister if that’s what it took to acquire his first BB gun.

Arguably the best scene in the film is when Ralphie imagines himself defending his home and family against sundry masked villains bent upon mischief. The demised burglars end up stacked like cordwood replete with stylized cartoon Xs over their eyes.

This Bill Murray Christmas comedy classic would be relatively gun-free were it not for a fantastic satirical introduction titled, “The Night the Reindeer Died.”

In this over-the-top spoof, maniacal terrorists attack Santa’s workshop at the North Pole only to find that Santa, Mrs. Claus and the elves are all packing heat and ready to rock.

An M60 along with a variety of M16 variants emerge from hidden compartments in the workshop and soon have Santa’s little helpers bringing the pain on the bad guys. Lee Majors (the “Bionic Man” for those of us lucky enough to have lived through the 1970s) then appears wielding the same handheld M134 minigun that Jesse Ventura used to face down the Predator in the movie of the same name.

“Scrooged” is a funny movie based upon the Charles Dickens’ classic “A Christmas Carol.” Murray was in his prime and the film pokes fun at all sorts of pathetic modern proclivities. However, the introductory short, “The Night the Reindeer Died” eclipses it all.

“Home Alone” showcases an adorable young Macauley Culkin as Kevin McCallister, a hapless little boy inadvertently abandoned at home while his family blasts off to enjoy Christmas out of town.

Kevin subsequently has to face down a brace of unscrupulous crooks, one of whom it played spot on by Joe Pesci. Rather than be cowed by the imposing professional burglars, Kevin takes it upon himself to teach the two criminals a painful lesson or three.

The means Kevin uses to grant the two thieves their comeuppance are legion. However, his primary weapon is a lever-action BB gun, not unlike that wielded by Ralphie in “A Christmas Story.” In thoroughly comical fashion, Kevin reminds us all of exactly how much a single determined rifleman can accomplish.

To cap things off, our friends at Ballistic have a similar list of their all-time favorite guns in movies. Check it out. You won’t be disappointed