On January 12, 2017, Columbus, Georgia’s Ledger-Enquirer released an article stating, “Heckler & Koch, a manufacturer of firearms and accessories, will invest $28.5 million to expand its existing operations in Columbus, Georgia. The new 50,000 square-foot facility in the Corporate Ridge Business Park will be ready in the summer of 2017, at which time HK will consolidate its New Hampshire operations into Columbus. ‘HK’s new U.S. factory will make use of advanced manufacturing technologies and will be staffed by German and American engineers and technicians,’ said Francisco Hidalgo, CEO of HK USA. ‘The HK products will maintain the same level of quality and reliability that the consumer has grown to expect from HK. Our company motto is and will remain No Compromise.’” 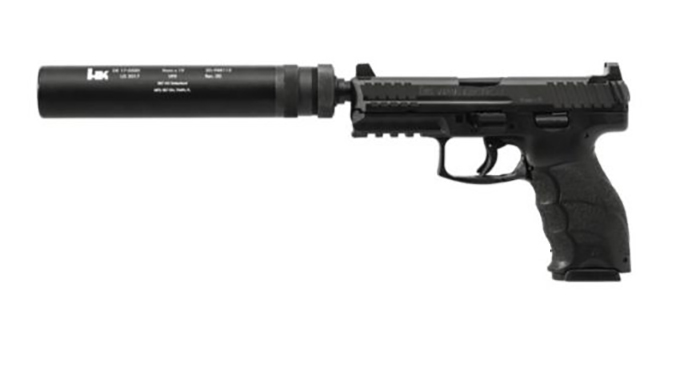 And with that, my hometown of Columbus became the home of HK USA and the center for all U.S. production of HK products. HK has had a presence in Columbus since the early 2000s, when it competed for the Army’s Objective Individual Combat Weapon (OICW) program with the XM8 rifle. The OICW program’s several starts and stops lead to cancelation in late 2015. But even with the cancelation, HK kept the Columbus facility open. It became a customer service center and the central clearinghouse for all HK weapons coming into the U.S. from Germany.

To understand HK, you must understand the company’s business DNA and the role of both U.S. and German governments. HK has always designed weapons for the government and military organizations. Although some of those projects resulted in commercial products, that was largely an ancillary effort. Some have said HK does not understand the American firearms market. I would agree with that, but it should be placed in perspective. HK does not have a reference point for comparison. Germany lacks a Second Amendment; the government limits private ownership of firearms, for most, to hunting shotguns and rifles. The American gun culture is foreign to the Germans at HK and in the German government.

Germans not only discourage private ownership of firearms, but also look upon it with suspicion. For HK to import a model into the U.S., HK’s corporate leadership must first approve the product. The BAFA/BIS govern the German government’s export restrictions, providing the second hurdle. This program, when combined with International Traffic in Arms Regulations (ITAR), tightly controls the export of weapons and technology. Officials weigh cases on their own merit, not in context with prior decisions. When HK and the German government approve a product, the U.S. State Department and other organizations must approve of the importation of said product. Firearms receive a points system here, with a minimum score needed for approval. Products earn importation status only through this process, sending them to the U.S. commercial market.

Behind The Scenes at HK USA

With HK’s new focus on the American commercial market, including the new Georgia production facility and fresh leadership, a lot will change in the next several years. Because of the hospitality of Mike Holly, executive vice president of sales and marketing, and Bill Dermody, director of marketing, I went behind the scenes to provide a firsthand account of what HK is doing and what’s coming. This includes extensions of current lines and new designs developed specifically for the American commercial market.

At the annual IWA trade show, HK Germany introduced several variations of the popular VP9 pistol, including an optics-ready variant, one with a manual safety and another with a button magazine release that replaces HK’s traditional paddle design. Because VP pistols are made in Germany and then imported, I hope these options will soon be offered in the U.S. market. These changes—especially the American-style magazine release—will make the VP a more viable option for the commercial and law enforcement markets.

HK USA is also working with Germany on upgrading the MR platform. The MR556 and MR762 are considered among the finest modern sporting rifles available today. An outgrowth of the HK416/417 series, these piston-driven rifles are known for their reliability and accuracy. The HK416 is the rifle of choice for many special operations units worldwide. It has been reported that SEAL Team Six was carrying HK416s on the raid that killed Osama bin Laden. However, existing models have somewhat dated features and are in need of an upgrade. This is particularly true with the handguard/rail. As with the VP, any upgrades must be approved by HK Germany and the German exporting authority.

When I visited the HK plant, several production cells were up and running. Currently, HK USA is producing HK45 series pistols in Columbus using a combination of imported and American-made components. I also saw several racks of MR762 rifles going through final inspection before being shipped to dealers. Other production lines were in the process of final assembly, with several multi-axis CNC machines being calibrated and brought online. HK USA will make cold-hammer-forged barrels in-house. The forging machine had recently arrived from Germany and was being assembled.

The most impressive part of my visit was chatting with Bill Alexander, formerly of Alexander Arms, to see what’s going on with testing. Alexander served in the British army before coming to the United States. He and his team are responsible for ensuring products meet HK’s legendary standards. The HK plant has an indoor range and high-speed photography capabilities, plus an atmospheric chamber to test weapons in extreme conditions like sand and dust.

“Every product must meet, if not exceed, military testing standards,” Alexander said.

Part of what makes HK USA successful is its team. Most of the team consists of American personnel with years of experience. However, several employees from HK Germany bring their HK experience to the table. The result is a company that will move forward while maintaining the DNA of HK Germany. HK USA has put a detailed process in place that will manage existing products while developing new designs.

“The process involves a consistent manner of gathering information, defining problems and a cross-functional team that consists of employees from sales, marketing, engineering and manufacturing,” Dermody said. Employees with years of experience in the U.S. market drive the new-product process.

Under the new leadership, HK USA is building partnerships with other American companies, including those that make holsters, optics and accessories like Crimson Trace and Streamlight, with other major companies to follow. Accessory companies will be up and running when HK launches new products. Although this isn’t new to the American market, it’s a new approach for HK, and it’s a result of the American leadership team.

HK USA is also becoming an active participant in the shooting community. For example, it was a major sponsor of the 2018 Georgia State Steel Challenge match and is taking part in other events held at Strongpoint Shooting Complex. HK USA has also donated several pistols to Strongpoint to assist in training new shooters in responsible firearms ownership.

The new management team also understands the importance of customer service. The number of customer service employees has increased to handle the renewed interest in the brand. In-house manufacturing capabilities improves service. Customer service is not always about handling problems. Often, it involves answering questions, giving advice and, most important, listening. All customer feedback is important, and the critical question is, “What are the unresolved needs of the consumer?”

There’s a lot going on at HK USA. Although most of the current production relies on imported and American-made components, the transition to more American-made parts continues. As with any company, designs are on the board, and some working prototypes are being developed to meet the needs of American consumers. As to be expected, we can’t write about these yet. However, what I saw was exciting. The timeline for the release of an American-designed and -manufactured HK firearm has yet to be determined. However, several products in the pipeline are in various stages of design and testing. HK conducts extensive testing prior to releasing a new product. HK USA is to dedicated manufacturing products that live up to the HK name.

So what can we hope for in the future? I look forward to the improved MR series of rifles and more American-friendly VP pistols. Products designed and manufactured in America carry more importance than legacy products. The U.S. concealed-carry market provides one void in the pistol lineup. Products designed for American sportsmen and the hunting market leave another void. Looking down the road, it makes sense to consider these markets.

The future is bright with the HK USA team. The potential is unlimited, and the company has some of the best people with the brightest minds and exceptional creativity. For HK fans who have been frustrated in the past, be patient, because relief is at hand. If you’re not a fan of HK or have never given its products serious consideration, make sure you check out hk-usa.com. The best is yet to come.