It goes without saying that the shooting sports as a whole is a male-dominated sport. As time progresses, and likely most evident in precision rifle shooting, that male domination has definitely become one of physical numbers more so than skill, capability and knowledge. Rei Hoang challenges that paradigm. 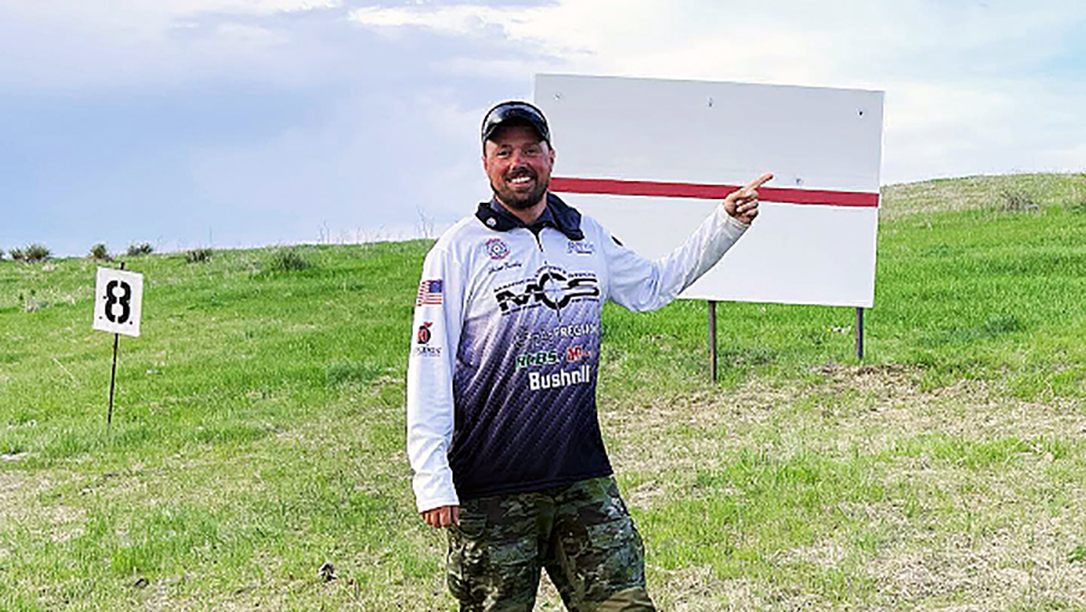 With many years of pistol and carbine training under my belt, starting back in 2005, I became accustomed to the Boy’s Club. And, with the extensive knowledge I garnered and skills I developed, I enjoyed being able to perform at high levels, if not higher than average. While that was the norm many years ago, it’s light years from that way now. Now I have to accept that if I decide to show up at a precision rifle match or training, the likelihood of a 13-year-old girl (or boy for that matter) outperforming me is imminent. And I think that is cool.

While not quite 13 years old anymore, Rei Hoang isn’t physically much bigger than a teenager. Although small in stature, she is an absolute giant in the rifle world. Her skillset, knowledge of all things reloading, and ability to work on and service the tools of this trade is beyond the majority of us. A social media success among other successes, Rei has over 30,000 followers of her 9_Dolls Instagram account. “I’m proud of the fact that I came into the sport knowing nothing,” she said. “I grew up in the city with no access to shooting or guns. My social media page reminds me where I started and where I’m going.”

Rei is a fierce and successful competitor in the precision rifle shooting community, but now her sights have changed, pun intended. She is taking on the space of ELR (extreme long range). Time to check your ego. I, too, have interest in shooting ELR, and always have. To do so, and do it effectively, it takes some work, prep and a good mentor. I gladly adopted Rei as one of mine.

Rei got her first rifle back in 2015—a stock Remington 700 in .308—as a birthday present to herself. “I always liked firearms and bought myself a bolt gun for my birthday,” she said. “I wanted a .338 Lapua, but it was too cost restrictive. On my first outing with [the 700] I fell in love instantly and bought a full custom rifle three months later. I didn’t think I could afford a custom rifle, but the gunsmith showed me how to chamber and barrel it. After that, I took my first rifle class at the Max Ordinate Academy.”

Rei went on to gain an extraordinary amount of knowledge about precision rifle shooting and honed her rifle craft. Soon, she was an instructor as well as competitor in the NRL, PRS and Competition Dynamics series to name a few. “I really like the science behind it…all the knowledge involved,” she said. “It’s not just run and gun. I also love how you can see yourself progress…you can see it on paper.”

This statement gives even more insight into her personality and high intelligence. While many of us into guns would love the opportunity to create and 3D print our own parts, Rei is in school to be a biomedical engineer so that she can 3D print organs for medical research.

In 2020, Rei competed in her first ever ELR match in New Mexico. No big deal right? Well try this on. She did so by borrowing a rifle—a JJ Rock .375 Cheytac—on the Thursday before the match. Yeah, they build awesome rifles, so what’s the point? The point is, the rifle wasn’t even assembled—no optic, no load data, nothing. “I toured the factory the day before,” she said. “John gave me brass, powder and a press to borrow. I went to someone’s house that Thursday night to put the scope on. I drove to the match on Friday.”

Rei overcame obstacle after obstacle, including automobile issues, to arrive in New Mexico at around 5 p.m. Practice was nearly over for the day, and she squeaked in a quick zero session with some help from strangers before the range closed down. “I barely had any time for load development, a storm was rolling in from the distance,” she told me. She even had to zero her rifle by shooting at rocks because the targets were all shot up.

The next day was the match, and Rei did load development and loaded her own ammo during the match. “That’s when I started loading with the teaspoon,” she said. Yes, you read that correctly. This is an important note to remember.

That’s an amazing accomplishment for any shooter at any experience level, let alone for a first-timer using all borrowed equipment that technically hadn’t been tested, and no loaded ammo. I should note that the rifle is taller and heavier than Rei. In all honesty, her success ruffled some feathers and unfortunately brought some backlash. That’s what happens when ego’s get crushed. But she took it all in stride.

Now in 2021, she is in preparation for a hefty competition schedule to include more ELR matches than before, as well as several PRS-style matches, Competition Dynamics and NRL’s new Hunting series of matches. She is currently ranked 4th in the world for KO2M.

At Rei’s suggestion, I decided to compete in my first ELR match in August 2020. I was already one up on Rei, having a rifle that was already built and set up. It’s a .375 Cheytac with a JJ Rock XL action, 32-inch Bartlein barrel 1:7 twist, Timney trigger, all inside a McMillan Beast II stock. All of this was expertly built by my trusted builder of many years, Saltzman Gunworks in Tipton, Indiana.

I met up with Rei at the range, where she ripped me about the cobwebs on the rifle. More specifically, the cobwebs in the raceway of the action. I don’t know how, but they were there. After a quick once over we started load development on the rifle, and that’s where I met “the teaspoon.” I’ve had the privilege of loading ammo with some very skilled people with some incredible setups and equipment. I would have never believed you could load precision ELR rounds with a tiny Frankford Arsenal scale, resting in the back of a Chevy Suburban on a hot Arizona day, using a teaspoon. The powder was Hodgdon 50 MBG, spoon fed into Petersons brass and Cutting Edge 400-grain Lazer-Tipped projectiles. All of these are excellent components and staples within the ELR community.

Since our rifles were basically identical setups, Rei used her load data for my ammo, which brought great results from my rifle and  produced a standard deviation of 2 fps— a great place to start for this rifle’s first ELR outing. From there we would load 100 rounds for my competition, which was to be shot at Clark’s Knob in Kansas in August of 2020.

Upon arrival at the match, I could sense the difference in vibe from other competitions. The different types of equipment and rifles was plentiful ,with a host of products I never even knew existed. ELR has excellent manufacturer support, and one of the most notable companies is Applied Ballistics. Bryan Litz and his team are well known in the community and they were in attendance, along with the Applied Ballistics Mobile Lab.

AB Mobile lab allows them to better service the shooting community as well as promote their products and capability. This lab shows up on site with everything to create ballistics success through the development of custom drag curves for each shooter. This is completed by using true Doppler Radar that AB brings on site, and having each shooter shoot their specific load to be recorded and analyzed. After 10 rounds, the AB team crunches the data and provides the shooter with priceless, and extremely accurate, data about the individual rifle/ammo performance. This data can then be plugged into a ballistics calculator such as a Kestrel or other device using the AB software for customized ballistic solutions. This is provided at no cost.

After running our rifles through the Doppler radar, we commenced practicing to confirm and fine tune our dope. Targets ranged from 1,100 yards out to 2 miles. After firing roughly 20 rounds and having at least one hit at 2 miles, I felt prepared for the next day’s competition.

The weather was about as good as it could be with partly cloudy skies and variable winds that were pretty typical for the area. There were no notable high speed gusts, just the usually on and off changes. There were two divisions: Heavy Gun, which started at calibers above .338 Lapua, and Light Gun, which capped at .338 Lapua. The different divisions shot at different groups of targets in opposing directions for the most part.

On the heavy gun side, the starting distance was 1,813 yards and 1,848 yards. Six shots were allowed at the first target and five at the second. I watched closely as Rei prepared for her upcoming run, and this is where I suddenly felt ill prepared. The amount of detailed information she brings to the firing line including charts, drawings and notes, leaves little room for error in calculations and condition observation. It is impressive to say the least.

Rei had a solid first run with help from spotter, Jon Gieb, of JJ Rock Co., although Hoang admits working with a spotter is not her strength. Years of shooting precision rifle competition and having to spot her own misses and trust her own wind calls are to blame. Rei went five for 11 on the first two targets, stacking a majority of her hits at 1,848 yards and having four impacts in a row.

My first ever ELR run was a surprisingly solid one. With incredible spotting and wind calling from Chase Stroud of team Applied Ballistics, I managed nine for 11, dropping only one impact per distance. I was amazed by how well I could see misses and impacts at these distances. Chalk one up for the excellent Nightforce ATACR 7-35×56 on top of the JJ Rock Super XL action.

From there, my momentum would slow as equipment struggles would work against me in a couple of stages and mystifying wind conditions turned solid trigger presses into near misses at further distances, but misses nonetheless. It’s tough on the soul, for sure, but the amount of knowledge gained was well worth it. Rei made contacts on the important distant targets, and that makes the difference as point multipliers are added to your impacts and misses. A first-round hit helps your score significantly, and goose eggs on any target hurt deeply. In the end, Rei finished 37th and I finished 45th out of 67 shooters.

My first foray into ELR was excellent. I thoroughly enjoyed every aspect of it and believe anyone serious about becoming a skilled precision rifleman can gain a lot from the discipline, regardless of which segment of precision rifle you go into—whether PRS-style, ELR, F-Class or even hunting. The fundamentals are the same and apply to each. This is why I believe Rei Hoang is such a fierce presence no matter what segment she participates in. I’m sure she’ll do well in the NRL Hunting series, too. Her application of the fundamentals and zeal to grasp extensive amounts of supportive information is second to none.