by Will Dabbs, MD
in Lifestyle, Pop Culture
0

I lived out of my Humvee in the desert for weeks on end. That truck was stripped down to its bare bones—no doors, no top and no frills. I scrounged some old tent canvas to improvise a bikini top for the vehicle to help ward off the blistering sunshine. I kept a couple cases of MREs and several water cans along with extra fuel and some scant comfort gear in the back in a vain attempt to inject a little civilization into an otherwise decidedly uncivilized world.

There is no place on a GI Humvee that is conducive to sleeping. I tried literally everything. The rear fenders are too short and narrow. The hood slopes excessively. The seats could serve as implements of torture even when simply used as intended. The bed of the truck sports heavy corrugation that will grind into your bones despite a proper sleeping mat.

After a lot of trial and error, I just laid myself down underneath the engine. The Humvee sports 16 inches of ground clearance, and it tends to feel cozy underneath once you get accustomed to it. Fortunately, my truck didn’t leak a drop of oil. Over time, that muscle- bound vehicle began to feel an awful lot like home.

I had already gone three days without an ounce of real sleep. Protracted sleep deprivation is surreal. Scenes such as this set a dark mood.

The brigade tactical operations center (TOC) was set up in a sunken road that ran some 15 feet or so below the level of the surrounding pancake-flat desert. This reflected a sound tactical choice, as the several tents that made up the command post were subsequently hidden from prying eyes. Only the clusters of antennas poking up above the surface yielded any hints as to the hive of activity going on underneath. 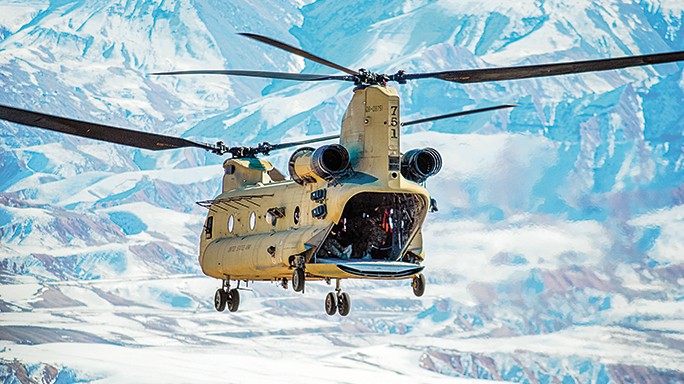 It was 0230 on a nearly moonless night, and I faced the prospect of three full hours of blissful slumber before my presence was next required. Absolutely enraptured at the thought, I arranged my sleeping mat in its customary spot underneath the front axle of my hummer. Residual engine heat from a busy day’s work tended to radiate enough to take the edge off the nighttime desert chill.

Military operations are innately dangerous, and accidents can be manifold when thousands of souped-up teenagers are unleashed with the many-splendored implements of modern war. As such, SOP mandated that each sleeping soldier set a visible ChemLight atop his sleeping bag to keep from being stepped on or worse in the darkness. A glance down the deep, sunken road showed a row of intermittent soft green glowing lights stretching out for 100 meters of more, each representing a single sleeping soul.

I had just turned and knelt to make my way underneath my truck when an M1 Abrams main battle tank screamed out of the darkness and dropped gracelessly into the sunken roadway, its 130,000-pound bulk crashing down hard enough to literally shake the earth. In the pitifully dim light, I saw the tank’s heavy armored skirts flash by no more than 15 feet from where I knelt. The bewildered driver locked the brakes on the massive vehicle and it slid to a stop, rocking forward violently on its suspension as it did so. The second tank that had been following the first slid to a stop just at the edge of the drop-off, its skid adequate to shower me with dirt, sand and gravel.

A trio of these armored monsters had been moving at speed across the desert under night-vision goggles. Given the innate lack of depth perception intrinsic to these otherwise extraordinary devices, the lead tank had fallen into the sunken road unexpectedly. It was nothing more than the vagaries of chance that dropped the 65-ton armored vehicle where it did.

I peered around the back of the enormous machine to see the next ChemLight perhaps 20 meters away. The tank had plunged into the one spot within a football-field-sized area wherein it would not have crushed someone to death. The young driver extricated himself from the tank and walked around the vehicle trying to get his head around what had just happened. As for me, I leaned back against the hood of my Humvee and began to shake.

I absentmindedly ran my hand over the hood of my Humvee as the brigade sergeant major appeared from the TOC with his hair on fire. The look on his face betrayed the fact that he likewise imagined what would have occurred had that tank been some 30 meters to the right and dropped right on top of the TOC itself. The sergeant major gathered several ground guides with flashlights and proceeded to work with the tank crew to get the enormous thing out of the road and back up to the desert plateau.

Fifteen minutes later, it was as though nothing had happened. Now nearly three decades later, I still get a chill thinking about it.

After 33 years of faithful service, the military is replacing the Humvee in active combat roles with the new Joint Tactical Light Vehicle (JLTV). The Humvee was never intended to serve in direct combat, and the JTLV is a much more survivable platform. A fringe benefit, however, is that Uncle Sam is auctioning off his surplus Hummers at pennies on the dollar. Vehicles that cost the government $70,000 new even back in the 1980s can now be had at auction for a tenth of that today.

The quality of these vehicles ranges from pristine to garbage, with everything in between. They are sold for off-road use only but can be titled for use on public roads in many states. Call your local tax assessor’s office as a starting point. They can tell you what would be entailed in getting a clean title and license plate for such a military-surplus vehicle.

In my home state of Mississippi, we aren’t big on draconian rules. As a result, the titling process can be done, though it remains admittedly cumbersome. An acquaintance of mine has two vehicles still awaiting title documents even nine months after starting the process. My truck, however, is free and clear.

It’s hard to believe I am an old guy now. Where has the time gone? I bought my surplus Humvee and took it home not really knowing what to expect. It had been 30 years since I last sat in one. Alas, not unlike bicycling, it does indeed come right back.

My hands found the switches of their own accord. I poked all around the truck, admiring its weathered desert tan exterior now peeled and aging, not altogether unlike me. We ran all of our vehicles through the post paint shop to cover the green camouflage with tan when Saddam Hussein singlehandedly redirected the focus of the U.S. military from Eastern Europe to the Iraqi desert. My truck has at some point had a similar treatment. A wire brush, some sandpaper and a couple of cans of tan Rust-Oleum made the old girl sparkle again. 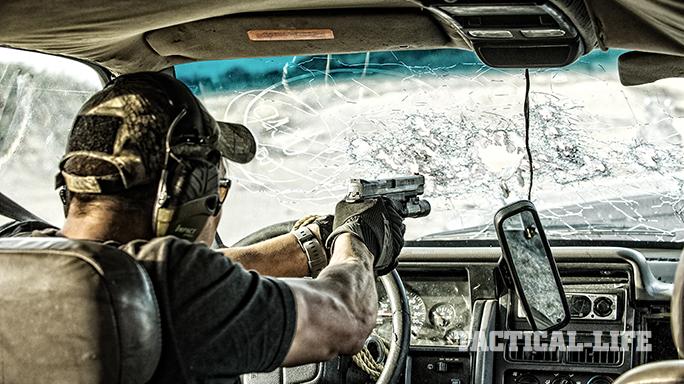 I gave the truck a good preventive maintenance check and was tickled to find that everything worked, right down to the blackout lights and that asthmatic military horn. The heater, in fact, will run you out of the thing if unleashed with the doors closed. In my old original, I grafted a length of drier hose to the heater outlet so I could feed it my uniform shirt if needed. Such a setup was divine when driving vigorously in the early morning chill.

I drew up some stencils and adorned my truck appropriately. The unit designation reflects my first combat unit, just for giggles. The Americanized DAK Afrika Korps symbol had previously been rendered solely in chalk on my GI-issued truck back in the day. Now that this truck was truly mine, I could do with it as I pleased. The insignia therefore became permanent. The same goes for the stylized Adventure Team symbol that tied me to GI Joes of old.

It was a treat showing the truck off to my wife and kids while using the experience as an excuse to relate old stories, most of which were pleasant. When pointing out how much space there is underneath the front axle, I have to fight the urge to climb underneath and stretch out, just for old time’s sake. Now I take my old military truck on errands around town and bask in the fact that nowadays I get to sleep at home with my wife rather than supine on the sandy desert floor underneath a dirty 7,000-pound military vehicle.

The fact that we serve in the military during our youngest, most vital period of life tends to imprint those experiences indelibly someplace deep. Though I have not worn my uniform for real in nearly 30 years, my bride informs me that my dying word will be “Hooah.” Some things you just cannot unlearn.

My helicopters were way sexier, but I somehow doubt I will ever afford a surplus CH-47D Chinook or S-model AH1 Cobra gunship of the sorts I flew back in the day. However, resurrecting a certain desert tan Humvee that served ably and well as a steed, cover from some fairly pitiless weather and mobile home away from home is actually within my budget. That experience brought back floods of memories.

The vehicles we drove, the aircraft we flew, the equipment we carried and the weapons we wielded all figured into a cohort of experiences of sufficient intensity as to have substantively shaped my life. To relive some of that while celebrating friends both kept and lost is indeed a treat. That the catalyst is a beat-up old surplus military truck was frankly unexpected.