We were responding to a man with a gun call. I radioed my shift sergeant and suggested he go in the back way and I would take the front. The location was an old apartment building that had a front and back entrance, with stairs leading up to a common landing. We were both close and probably there in less than two minutes. According to the dispatcher, we were looking for a man with a red shirt who was carrying a pistol.

We coordinated our entry by radio and met on the landing where there were a number of people milling around the hallway. They were excited and creating a commotion. Neither of us saw anyone wearing a red shirt. I asked a woman holding a baby, “Where is the guy with the gun?” She looked at me like a cow looking at a new gate, shoved her finger at a guy that was looking right at me and said, “Right there!”

Sure enough, standing about halfway up the stairs to the next landing was a disheveled looking gent with a cowboy belt and holster rig on his hip. I could see the ammunition in the cartridge loops; he was only 15 feet away. What he did not have was a red shirt. He had no shirt at all.

At the same instant my sergeant and I drew our Glock 22s and pointed at the gunman, who immediately assumed the gunfighter/Yosemite Sam pose. My sergeant was a trained hostage negotiator so he took the lead as I covered the suspect with about half the pressure already exerted on the Glock’s New York trigger. I knew at any moment this grease ball was going to draw and he was yelling at us with that threat. I had no intention of letting him clear leather.

With me covering, the sergeant kept his attention with some savvy talk and managed to close the distance. Finally he snatched the guy by the arm next to the gun in the holster, pressed him against the wall and cuffed him. When he had the suspect cuffed I moved in and disarmed the desperado. I was shocked to pull a pellet pistol that looked just like a Smith & Wesson Model 686 from the holster.

Editor’s Note: We pay $100 for each account we print. Send to the magazine, c/o “Police Stories.” Email Us 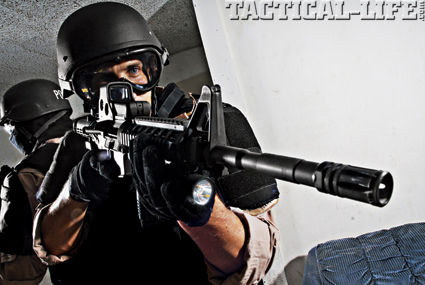 DRUNK COWBOY We were responding to a man with a gun call. I radioed…