It was late afternoon when I was dispatched to a “suicidal subject” radio call. The caller had allegedly taken an intentional overdose of prescription medication in an attempt to harm himself. Despite the fact that he called police, the subject told dispatch that he did not want officers to respond. He added that he had barricaded himself in his bedroom.

While en route to the call, dispatch said the subject sounded like he may be losing consciousness. Dispatch advised that there was a handgun registered to the subject. (The subject made no mention of the firearm to dispatch).

Upon arrival, two other officers and I met several houses from the subject’s residence to formulate a plan. I had dispatch call in to the residence but they received no answer. As we began walking toward the residence, a vehicle parked in the driveway and a young couple with an infant entered the residence. Fearing that the couple had unknowingly placed themselves and their child in danger, we decided to enter the residence to evacuate them and attempt to contact the suicidal subject.

After negotiating with the subject to open the door for several minutes, he became more hostile, as he cursed and yelled at officers. I breached the flimsy bedroom door with an entry ram that I’d swiped from the SWAT van before heading to the call. Upon impact, the door was literally ripped in half and the ram penetrated a wooden dresser that the subject had propped against the door. As soon as the door was breached, I backed away from the doorway and drew my Taser X-26, as the other officers pointed their handguns at the subject.

The subject was standing in an aggressive stance near the front door, holding a large fixed-blade knife in his left hand. I could not see his right hand because he kept it behind the dresser that had been used to barricade the door.

I pointed my Taser at the subject, as my partners provided lethal force cover with their handguns, ready to engage if needed. When the subject disobeyed verbal commands to drop the knife, I fired the Taser, causing both probes to imbed in the subject’s lower center of mass. The subject fell to the floor and I rushed in to handcuff him without further incident. No firearm was located.

A few days later, I received a voicemail message from the subject who thanked me for having used my Taser to subdue him. He mentioned that had it not been for the police, he would have killed himself that day. As a result of the incident, he received appropriate mental health treatment. A Taser is not the answer to every tactical dilemma, but it sure came in handy that day.
— RN, CA 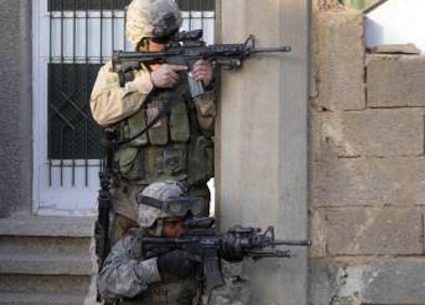 A pictorial thank you to U.S. and Canadian forces from ArmaLite.