DUMBEST CRIMINAL
I spent 35 years in law enforcement and have been in a number of combat situations, on the winning side each time. But on March 27, 2009, I became a victim.

I was attending the Pennsylvania Narcotics Enforcement Officers Conference, and had presented a four-hour lecture the day before on Risk Management & Raid Planning to the 300 cops in attendance. I was in the lecture hall at approximately 8:15 AM awaiting the last guest speaker and decided to hit the lavatory before he started. I walked about 30 feet to the closest men’s room, and as I entered, a male was standing at the sink washing his hands. He gave me “that look.” I got a wrenching feeling in my gut that something was wrong. But, I had to go. I had a gun on my ankle and there were 300 cops 30 feet away.

I went into the stall and relaxed for about five minutes. As I exited the stall, the subject, still in the restroom, placed a .40 caliber automatic into my face, stating, “Move and I will kill you! Give me your money or I will kill you!” I made an immediate assessment while putting my hands up (about 3 inches from the perp’s gun) that he was not a junkie, and considering I had to retire due to a back injury I would only be able to fight him for about ten seconds before I would become immobilized from pain. I decided to go with it and deal with him outside. I told him that nobody wanted to get hurt over money and gave him my wallet and money. He told me if I followed him he would kill me and ordered me to give him my cell phone and then drop my pants. I complied, covering the ankle holster while talking him into just taking the money and leaving. He backed out the door.

I drew my .40 caliber Kahr, pulled up my pants and ran after him. The desk and main entrance was about eight steps up. I yelled to the clerk to call 911 and yell downstairs that a police officer needs assistance. As I exited, the perp was crouched in the back of a taxicab that was pulling out. Since I have lectured at this convention for about ten years, I knew the cab would have to come back down the next row to exit the hotel. I did a felony stop on the cab and yelled to the perp, “If you move your hands I will kill you!” He did not move.

Ten cops going to class were passing the desk. The clerk yelled that one of their cops needs help outside. I watched as the cavalry came with guns drawn. I told them he was armed, I had him covered and that he robbed me. They removed him from the cab and recovered the gun, my wallet, money and cell phone.

This made international news when I labeled him the “Dumbest Criminal In Pennsylvania.” There were 100 marked and unmarked police cars in the parking lot and a billboard sized sign in the entrance saying, “Welcome Pennsylvania Narcotics Officers.” The perp, a 19-year-old, went on trial three days later for six armed robberies of pizza deliverymen. In each case he pistol-whipped the victims, crushing their skulls. He knew that I was not going to let him do that to me.

He is only alive because I had disregarded one of my most sacred rules — never wear an ankle holster unless it is a second gun. Thank God for HR-218, because if I did not have my firearm with me I probably would have chosen a different course of action, and who knows how that would have ended.

RIFLE SAVES THE DAY
I recently retired from a 33-year career in law enforcement, the last 23 years having been spent with a large federal agency. One of my major duties with this federal agency was fugitive investigation, and I was assigned to several state and federal task forces.

One time, in a small city outside the major metropolitan area where I resided, I was called and asked for assistance in locating a male person accused of aggravated sexual assault with a deadly weapon. This person committed the offense with alot cruelty to the victim and the assault lasted for a couple of hours. In addition, this person had recently been discharged from the armed forces, where he had committed a similar offense while
overseas. For this purpose, we will call this person “Snyder.”

The investigation revealed that Snyder was staying in a local motel, and surveillance on the second floor room was started. Officers from my agency, along with the original agency and the local police were present. The time of the year was early spring, with the nights still cool enough to wear a jacket.

As it was already fairly late into the night, the chances of apprehending Snyder either leaving or arriving were slim, unless we wanted to wait till morning. So a ruse was devised and the motel management called his room advising Snyder of a problem.

Snyder was observed exiting the room, but he stood at the door for several seconds, looking around. Two other officers and I were on one end of the walkway behind some columns on his floor, with other officers downstairs covering the ground floor.

I was armed with a personally owned AR-15 equipped with a white light, and a handgun. The other officers with me were armed only with their duty handguns. We could see that Snyder had started walking owards our position, by his shadow on the wall. Snyder stopped and began to back up, and it was then that we came out from behind cover and confronted him.

While continuing to look at me, Snyder then raised his hands and stated, “There’s a .45 on my hip.” The weapon was removed and Snyder was placed on the ground, handcuffed, and taken into custody. It was then discovered that Snyder was wearing body armor, and also had a magazine carrier with two extra magazines.

Snyder later stated that he thought that the police were outside waiting for him, and he had planned to shoot it out with the police, thus the body armor and the handgun. But upon seeing the rifle and the fact that it was aimed at his head and nowhere else, Snyder knew that if he tried anything, he would lose. So he decided to surrender.

Snyder was taken back to the municipality where the offense occurred, and was later convicted for the offense. 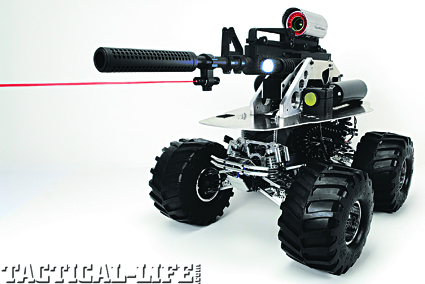