Learning experiences are the cornerstone of law enforcement. If you have them early in your career and heed the warnings, they have done some good. One such occurrence made me a believer. I had been out of the academy about a year (just long enough to think you know more than the old timers), when I was called to do an involuntary mental commitment. The family was at the residence, and unknown to the mother (and her other children), one child had filed paperwork to have Mom held for mental evaluation. I had done about a hundred such pickups before, but for some reason I asked another Deputy to assist me on this one. I am not the superbad cop that thinks he is a one-man show, but when a volume of calls for service is coming in, I didn’t want to “waste” patrol time with a minor transport. I have since realized that there is no such thing as a minor event.

The deputy and I went to the home, expecting a couple minutes of explaining the process, maybe a little crying, and then a ride to the evaluation center. What I got was one of three sons in the loop, one son completely surprised and the last son was indifferent to the situation. The surprised son (later committed multiple times for mental illness) was not happy with the process. The mother, we will call her Rikki, was very frail looking and began to tell us of all her medical maladies. In fact, she was a 45-year-old, 5’ 2”, and 85 pounds, and on a walker. Things were going okay until it was time to leave.

The surprised son threw a glass ashtray at the older brother that had filed the commitment paperwork. I had to break them up, and my partner started moving Rikki to the door. I broke them up and heard my partner getting loud with Rikki. I went to assist him and saw that she had abandoned the walker and attached herself to the doorframe. I am not a small man (6’ 2” 300 pounds), and the deputy was bigger than me, but he was having a time getting this little woman through the door. I noticed that the woman was now holding the doorframe with her free hand and bare feet.

A quick snatch, and she was freed from her doorframe perch. We were now headed down the walkway, both of us supporting her by the arms. Rikki began saying she wanted to die. Our tunnel vision had kicked in. All I was focusing on was getting her to the car, securing her, and getting down the road, but then I heard a “click.” This sound was followed by three more “clicks.” I looked down to see that Rikki had produced a full-sized revolver from God knows where, put it in her mouth, and began to pull the trigger. It seemed like time froze. I got a good grip on the gun and wrenched it away from her, then followed up with a takedown that brought both her and my partner to the ground hard. I then cuffed her and performed a pat down.

I have not been able to move that fast again or execute a move with such accuracy since. I recovered the weapon, and upon first glance, thought it was a pellet gun. My next thought was it must not have been loaded. I was wrong. A closer look identified it as an off-brand .357 Mag. Not only was it loaded, but it also had 6 rounds of hollow point ammunition in it. After I settled down, and the adrenaline dump had subsided, I looked at it even closer. I examined the ammo and found four of the rounds had primer strikes. I examined the weapon and found a clump of hair wrapped around the hammer. Apparently, the hair took just enough pressure off the strike to not ignite the primer. I was literally a hair away from death, hers and/or ours.

I later took the gun to the range, for my own curiosity, to see if it really worked or if it was just God watching over me. The first pull of the trigger (hair removed), and one of the remaining rounds punched through its intended target. This event plays through my mind and has affected the way I view people and events. Rely on your training, and don’t look at anything as typical. I don’t have any sage-like wisdom… just remember: we are all just a “hair” away from a life-changing situation. 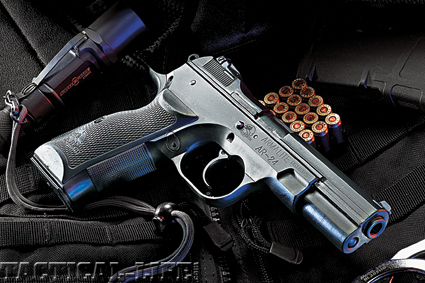 Learning experiences are the cornerstone of law enforcement. If you have them early in…