TAUNTING BURGLAR
I had been with the department about two years and was still a little green. It had been one of those Saturday nights where the entire section was staying busy. About half way through the shift, I answered a burglary in progress call with several other units. We responded to a low rent, two-story, apartment building. As I approached the front of the building, the suspect came out onto the second story balcony and started taunting us. He ignored our commands to lie down on the balcony and show us his hands. I drew my issued Smith & Wesson Model 66 and took aim at the insolent felon. He continued to run from one end of the balcony to the other, addressing us in a less than respectful manner.

As my tolerance for this disrespect started to wear thin, I decided I would show this guy that I was not to be toyed with. I centered the sights on the rogue burglar, and after one last command, I cocked the hammer on my Model 66 back into single action mode. This was long before “finger off the trigger” was a central part of all training. I had the burglar in my sights, the hammer was cocked, and my finger was on the trigger! All of a sudden, I realized what I had done. “What was I thinking?” I quickly decocked my service revolver and took a couple of deep breaths. Several more officers arrived and we went inside and took the suspect into custody.
In retrospect, I realized that I had let anger get the best of me. Whatever my thoughts were at the time, it dawned on me that my actions had put the suspect at risk and could have resulted in a negligent discharge, or worse, a fatal shooting.

Not long after that, several units responded to a violent domestic call where a fight was in progress. When one of my friends arrived, the situation had calmed down and two suspects were in custody. As my friend was about to leave, a veteran officer came up to him and asked for help. It seemed that he had gotten excited and cocked his Model 66 and screwed it into one of the suspect’s ears. Fortunately, the suspect decided to comply and was arrested without further incident. The problem was, the office did not know how to decock his revolver. He had placed it into his Border Patrol holster while still cocked. My friend took the magnum, lowered the hammer, and put it back in the holster. He then counseled the officer about how unwise the tactic was.

Several years later, we transitioned into double-action-only semi-autos, which solved the problem of cocking hammers on suspects. I now understand why many departments, especially in the northeast, ordered DAO revolvers from the manufacturer. Maybe we should have followed their lead.
— RG, GA 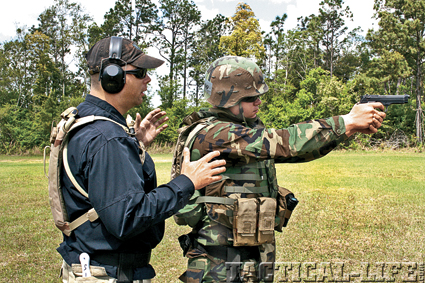