The suspect allegedly swiped the keys to a 2015 Mazda 6 from Golden Oldies Auto Sales in Hudson, Florida, according to police reports. As a result, a deputy located the suspect driving south on U.S. Highway 19.

Footage shows what appears to be the suspect avoiding authorities, with video clearly showing the vehicle wildly switch lanes and speed away. Consequently, the suspect eventually loses control of the vehicle, ending in a dramatic rolling crash off the side of the road.

Body cam footage then shows the suspect exit the vehicle and flee on foot, with an officer chasing, yelling for the suspect to stop. After a short foot chase, another responding deputy cuts off and stops the suspect without incident.

Deputies apprehended and took the boy into custody. Additionally, authorities charged the minor with grand theft auto and criminal mischief, according to police reports. Moreover, Pasco Sheriff’s deputies avoided injury during the incident.

Auto thefts remain a leading crime authorities are forced to deal with on a recurring basis. Also, according to FBI crime statistics, an estimated 765,484 motor vehicle thefts occurred in 2016. This number represented a 7.4-percent increase over the previous year. Additionally, the FBI estimates approximately $5.9 billion was lost during the reported year due to thefts. 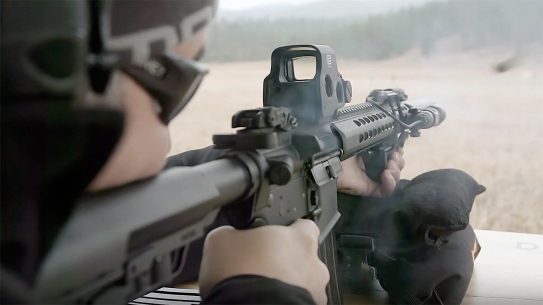 More compact and lightweight than ever before, the new EOTech XPS2 Green delivers lightning-fast...