0
SHARES
4
VIEWS
Share on FacebookShare on Twitter
The sectorization event had snipers directed by a spotter to hit very specific targets at a proportional distance of 2200 yards.

The 2010 US National SWAT Sniper Championship (USSSC) two day competition kicked off this week at the U. S. Shooting Academy in Tulsa, Oklahoma. The events were designed by Rick Porter and T.J. Pilling to realistically challenge each two person team with the stresses and distraction of physical exertion, oppressive heat and a ticking clock. The six tough sniper events ensure that every shot that is taken is exactly like a shot that would be expected during a call-out or operation with no margin for error. The events for the USSSC this year include: 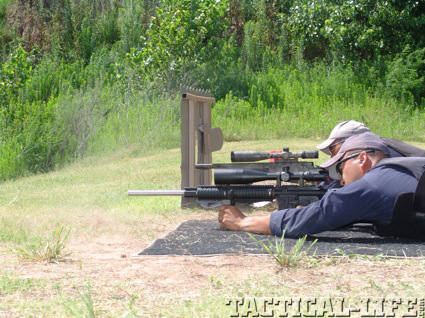 The Run and Gun event had the shooters engage targets from unknown distances to test their ability to rapidly change their aiming points to keep on target.

• Schmidt & Bender Run and Gun – Undoubtedly the toughest and grueling event, each shooter had to hit targets from unknown distances and awkward positions after running through and around obstacles.

• Sniper Hide had the teams shoot from an enclosed, cramped and blacked-out box that made putting rounds on target and even scope adjustments and reloading difficult.

• Cardbox Challenge had each sniper and spotter team uncover and hit playing cards inside a box opened with a precise shot.

• Woolrich Bullet Relay was a course of fire complicated with the need for each shooter to makes several trips to get ammo for his teammate.

• TCI Sectorization event had each team engage steel targets with his sidearm followed by the sniper finding and hitting targets in multi-story, similar-looking buildings at a proportional distance of 2,200 yards. The complexity was that the spotter using radio comms and viewing a notebook had to correctly describe which building and what window the sniper was to engage. 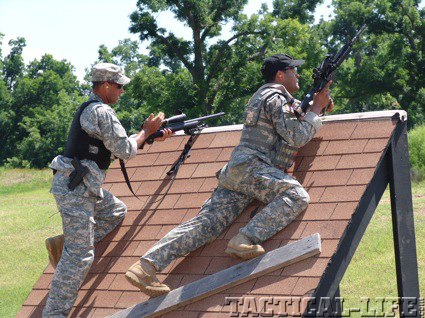 The 38 teams were dressed in full gear, including ballistic armor, and had to carry an unwieldy 165-lb dummy while crawling through and over barricades and tunnels. The competition is structured to ensure, as Dr. Jack O’Conner puts it, to be “challenging and fair.” There are no awards for “showing up” and each event takes an common toll with no team allowed to pre-run the course prior to the day. Why is this important? Competition is the best kind of training so each team’s home town, organization or agency gets a better trained and more competent officer when they return. That way – we all win. 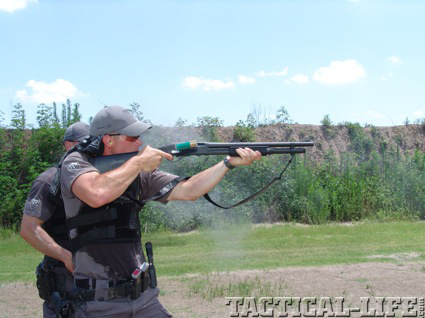 Part of the competition was training and maintaining proficiency. A Bruce Power team member practices here with a 12 gauge shotgun between events. 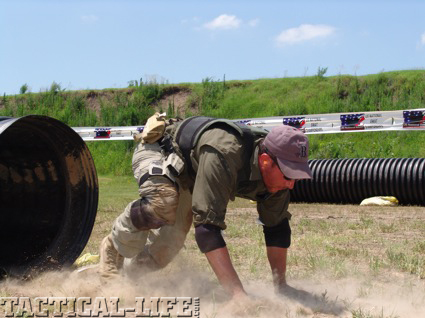 The tunnel was one of the most difficult obstacles that had no easy way to traverse. Even the dynamic “superman slide” ended up with the competitor’s face in the loose Oklahoma dust.

The last event determined the overall champion. The results were so close that before the last event, seven teams were separated with an eleven point spread! With 46 points, the U.S. National SWAT Sniper Championship went to powerhouse team from Bruce Power. Dallas SWAT and Oklahoma County #2 both earned 51 points with Minneapolis A at 52 points and La Plata County A at 56 points. 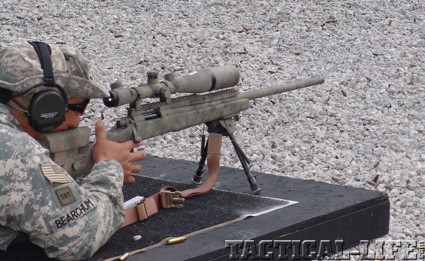 Bolt actions rifles still ruled as the premier precision-fire weapon in 7.62x51mm for most sniper teams. 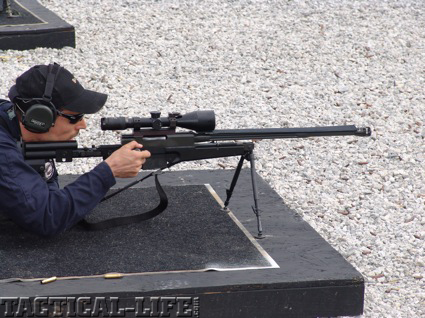 The European teams brought different moves, uniforms and equipment that everybody observed closely and admired greatly. 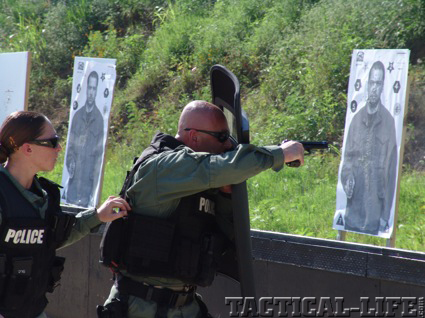 The FT Riley, Kansas team is shown during some of the training offered at the USSSC/USNSC. Sierra Cross helps guide a teammate practicing shooting and moving with a ballistic shield. 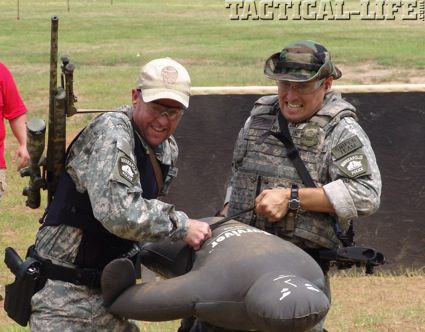 If there was a hated object during the competition it was the unwieldy 165 pound dummy that the competitors had to lug around with points lost for dropping – even after the event was over! 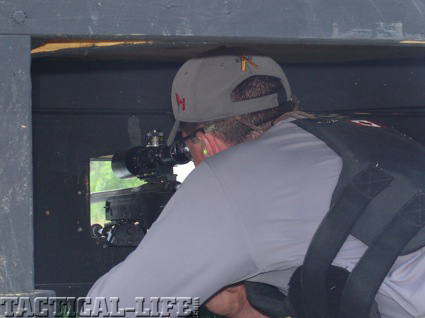 The overall winner of the USSSC, Bruce Power puts steel on target during the Woolrich Bullet Relay. 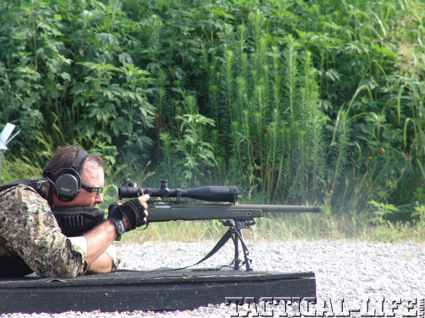 During the Sectorization event the spotter radioed instructions that determined which window of which building that the shooter engaged. 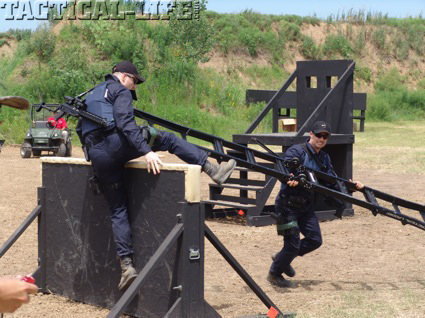 The sniper team from Zurich, Switzerland negotiates the LaRue Mine Disposal event. Zurich took an overall third place at the USNSC. 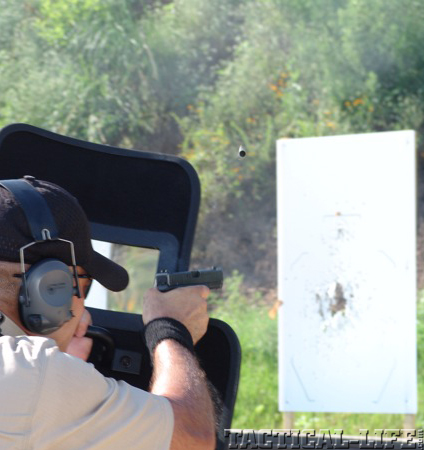 Use of the ballistic shield requires a lot of practice but can result in saved lives. Here a competitor learns how to shoot from behind its cover. 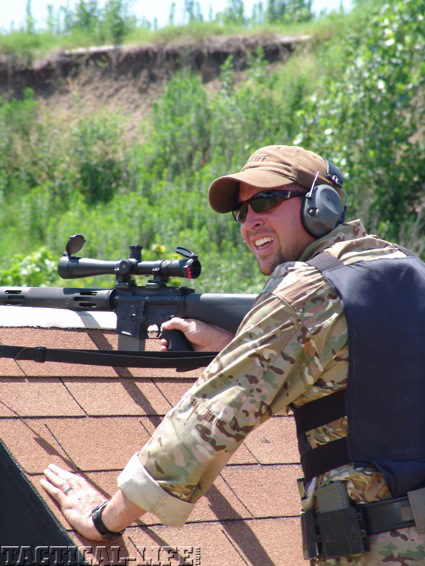 During the Schmidt & Bender run and gun, the time limits were so tight that some shooters couldn’t complete the course of fire and still had shots to take after the whistle had blown; hence the frustrated look. 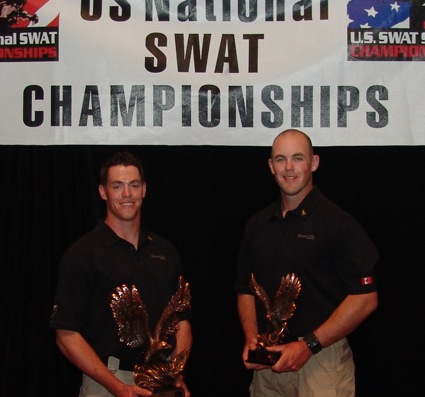 The Champions! The winner of the US SWAT Sniper Competition was the strong team from Bruce Power from Canada.