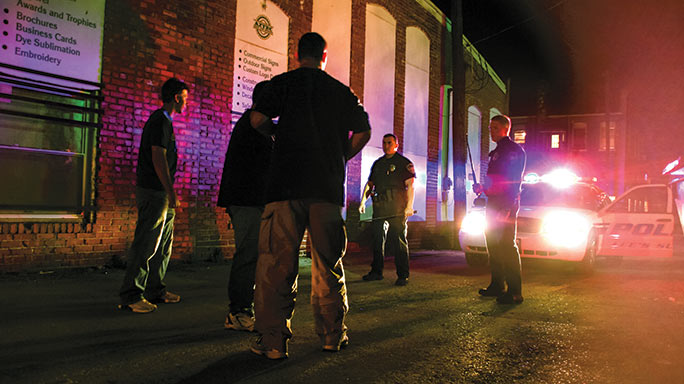 Because they’re outnumbered, these officers have found themselves in a disparity-of-force situation.
(Photo by Jeff Rose)
Comment(s)

It is commonly believed that deadly force can’t be used on an ostensibly “unarmed man.” Reality shows otherwise.

Take Case One for example, which happened in December of 2013. Officer Donald Hubbard, 42, of the Kansas City, Missouri, Police Department was the first to respond to a scene where an enraged passenger had beaten a taxi driver bloody.

After a foot chase, the suspect turned on the officer and, in the course of a violent hand-to-hand struggle, gained the upper hand. The assailant pinned the officer to the pavement and began a mixed martial arts-type “ground and pound,” breaking several bones in the officer’s head and face.

Unable to stop the attack by other means, Officer Hubbard managed to get his service pistol out of its holster and shot the merciless aggressor twice in the chest, killing him. The assailant turned out to be a 26-year-old off-duty firefighter with a blood-alcohol content of 0.21 percent.

Within two months, a grand jury cleared Officer Hubbard in the shooting. The beating he had sustained was so severe that he was still scheduled to undergo reconstructive surgery at that time.

What made this shooting and others like it justifiable is a principle called “disparity of force,” which recognizes situations in which the assailant may not have a weapon per se, but his physical advantage over the defender is so great that if the violent assault continues, the victim is likely to be killed or crippled.

In Case One, the element of disparity that justified Hubbard shooting his attacker was a “position of disadvantage.” The man delivering the blows was in a position of advantage that allowed him to continue potentially fatal strikes to the head of his victim, who could stop him in no other way.

In Warren on Homicide, the classic text some attorneys call “the Bible of deadly-force law,” we find other elements that can constitute disparity of force. A significant disparity in size and/or strength is one. So is a known or obvious high level of skill in unarmed combat that favors the opponent, the genesis of the old shibboleth of a professional fighter or black belt “registering his hands as deadly weapons.” A male attacking a female has long been recognized as another disparity of force. The same can be true when the able-bodied attack the physically handicapped, even if the handicap has been inflicted during the course of the assault in question.

A common disparity-of-force element is the “force of numbers.”

Consider Case Two, which occurred in Kentucky. In the course of a routine arrest evolving from a traffic stop, Trooper Roy Boleyn was violently attacked by two men. They got him down and began stomping him. Boleyn drew his sidearm and opened fire from the ground, killing both. The shooting was ruled justifiable.

Boleyn would go on to become the hero of the Glomawr Hollow incident, in which—ambushed, down and paralyzed from a cop-killer’s rifle bullet— Boleyn once again fired from the ground, stopping the rampaging murderer cold.

A responding officer may have to use deadly force to protect a third-party victim of a disparity-of-force assault. In Case Three, Miami-Dade Police Officer Jose Ramirez was the first to respond to the scene in the notorious “bath salts zombie” case in Miami. He found the naked assailant literally eating the face of his victim, a homeless man.

It took five pistol shots to stop the attack, which left the victim blind and horribly disfigured—the assailant had gouged-out both of his eyes. The attacker, supercharged on drugs, turned out to have a long history of extreme violence. The death of the assailant at the hands of the officer was a clear-cut justified homicide.

Both entertainment media and news media have created a simplistic belief among much of the public that the LEO can never use deadly force against an “unarmed man.” When it happens, we should not be surprised that some elements of a public uneducated in deadly-force law might become outraged.

In mid-2013, the nation watched the aftermath of Case Four in Florida, the trial of private citizen George Zimmerman in the shooting death of 17-year-old Trayvon Martin. A jury correctly found Zimmerman not guilty on classic disparity-of-force grounds: His assailant was banging Zimmerman’s head into the sidewalk when the single, fatal shot was fired. However, a hostile media blitz left much of America thinking the defendant “got away with murdering an unarmed teen.” This mentality will face any cop forced to do the same thing.

It is imperative that any working police officer be able to articulately explain his or her understanding of the disparity-of-force principle. Law enforcement instructors and supervisors will have to reinforce that on the witness stand, whether in front of a grand or petit jury. Finally, department spokespersons may have to explain it to the community in the aftermath of the incident. 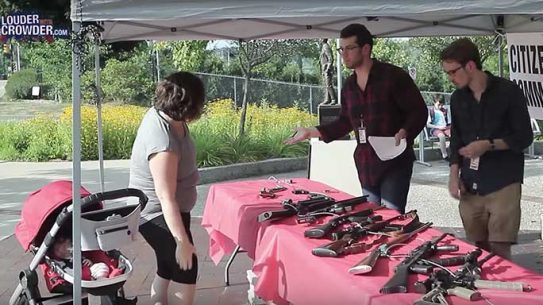 Conservative comedian Steven Crowder recently took his act to the streets to see what...