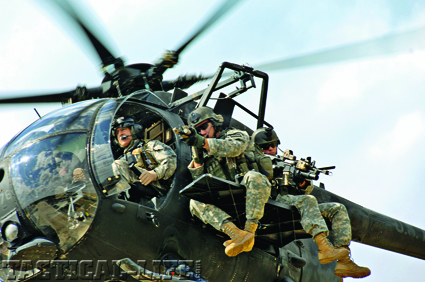 The 75th Ranger Regiment is the U.S. Army’s premier special operations light infantry rapid assault force. The Regiment operates under USASOC (U.S. Army Special Operations Command) at Ft. Bragg, NC, which is a subordinate command under SOCOM (U.S. Special Operations Command) based at MacDill AFB, Tampa, FL. The 3,000 soldiers assigned to the Regiment do not train foreign troops as do Special Forces; nor do they hand out school supplies to the indigenous populace as do Civil Affairs troops. The Rangers of the 75th have but one purpose in life: Close with and destroy the enemy…period.

The mission of the 75th Ranger Regiment is to plan and conduct joint special military operations in support of U.S. policy and objectives. Their capabilities include, but are not limited to: airfield seizure, air assault, direct-action raids, forced entry operations, seizing strategic key terrain and support of joint special operations and forces.

The newest Ranger battalion in the regiment is the RSTB (Regimental Special Troops Battalion) activated at Ft. Benning in July, 2006. The RSTB conducts communications, sustainment, intelligence, reconnaissance and maintenance missions in support of combat operations.

The 75th Ranger Regiment is an agile and lethal force equipped and trained to fight in any environment encompassing urban, jungle, desert, Arctic and mountain operations. The Rangers can conduct operations from squad to regimental size and are skilled in a variety of insertion and extraction techniques, e.g. parachuting, fast-roping, ground, and sea. When they are not deployed, the Rangers maintain their readiness to fight with continued training and live-fire exercises. Training is often conducted at night and during adverse weather conditions.

Ranger Training Brigade
Any male soldier—whether they are part of the 75th Ranger Regiment or another unit that volunteers for Ranger school at the Ranger Training Brigade—will undergo 61 days of muscle-burning physical and mental exertion. Trainees will carry between 65 to 90 pounds of combat gear and participate in more than 200 miles of tactical foot movement. Pushing themselves past exhaustion, they will survive on 2200 calories per day—that is one MRE—and if they are fortunate they will get between zero and five hours of sleep a night. Ranger training is not for the faint of heart, to say the least!

Phase I takes place at Camp Darby, Ft. Benning, GA and is designed to develop and assess the military skills, physical and mental endurance and confidence a soldier must possess in order to successfully negotiate and accomplish combat missions.

Phase II Mountain Phase is conducted at Camp Merrill, Dahlonega, GA. During this phase students receive instruction on military mountaineering tasks as well as techniques for employing a squad and platoon for continuous combat patrol operations in a mountainous environment.

At the end of this phase is a 10-day FTX (field training exercise). This comprises a fast-paced, highly stressful, challenging exercise in which the students are evaluated on their ability to apply small-unit tactics and techniques. They apply the tactics/techniques of raids, ambushes, movement to contact, and urban assaults to accomplish their missions. Upon successful completion of Ranger training the student is awarded the coveted Ranger tab.

Worth noting is that the Ranger school is an Army leadership school, and thus under the Training and Doctrine command. The 75th Ranger Regiment is exclusively an Army special operations element under the Special Operations Command. 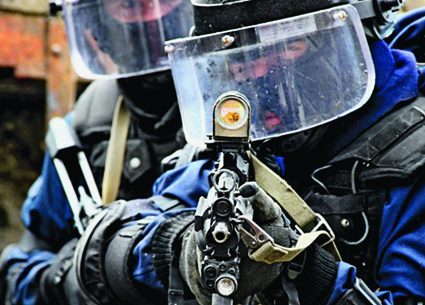