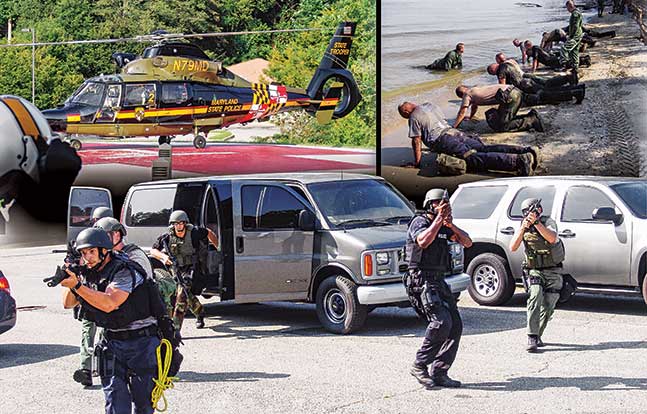 1 of 8
Agency Spotlight: Calvert County SWAT
Similar to the U.S. Navy SEALs, the Calvert County SWAT school trains attendees for operating in all environments—on the sea, in the air and on land. Each training evolution is designed to challenge the candidate’s physical, mental and leadership abilities in conditions well outside of their comfort zones. In the end, like SEAL training this helps build confidence and resilience. Even when the mission seems impossible, Calvert County SWAT operators will be able to prevail. 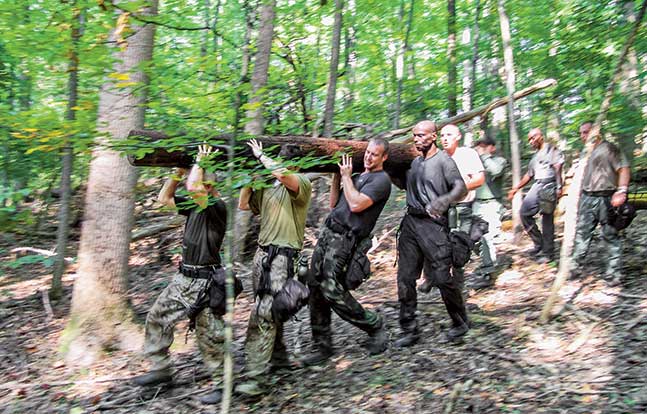 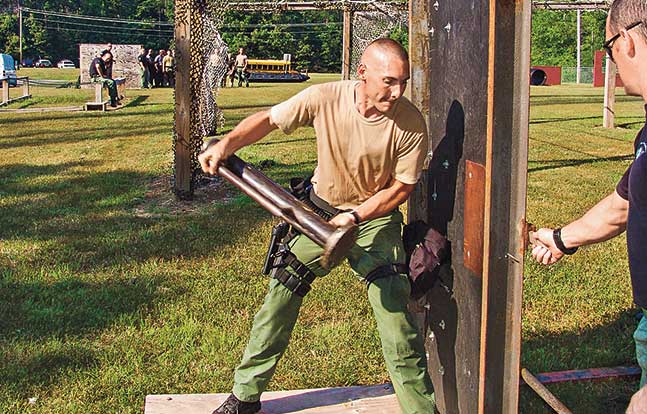 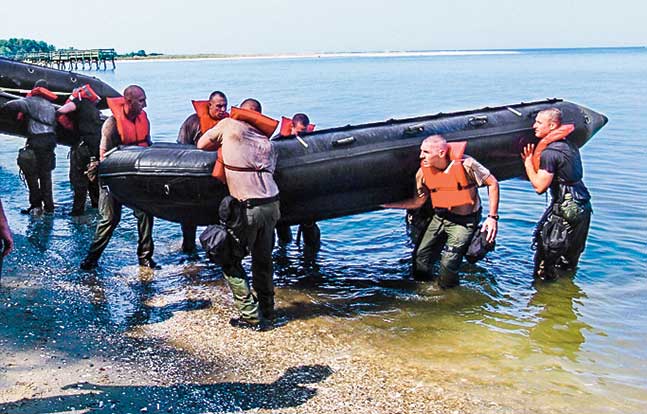 4 of 8
Agency Spotlight: Calvert County SWAT
Similar to the U.S. Navy SEALs, the Calvert County SWAT school trains attendees for operating in all environments—on the sea, in the air and on land. Each training evolution is designed to challenge the candidate’s physical, mental and leadership abilities in conditions well outside of their comfort zones. In the end, like SEAL training this helps build confidence and resilience. Even when the mission seems impossible, Calvert County SWAT operators will be able to prevail. 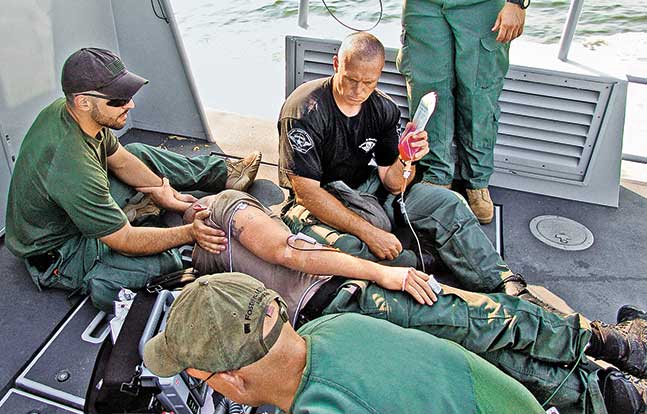 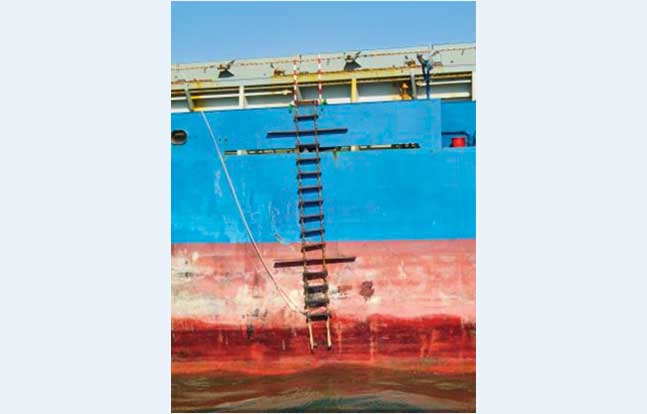 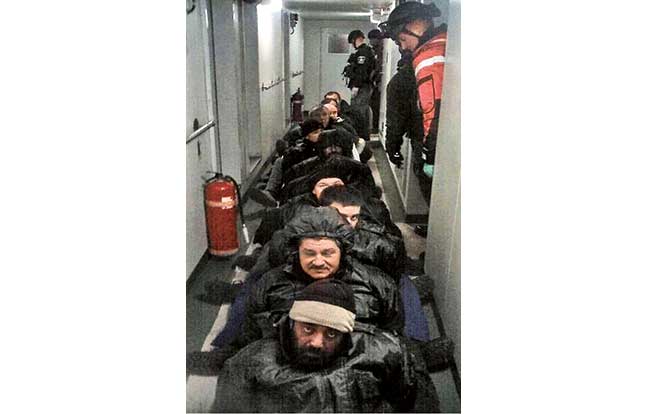 7 of 8
Agency Spotlight: Calvert County SWAT
The mutinous crew of the Ocean Victory is held under close guard after the 328-foot freighter was seized in the Chesapeake Bay. 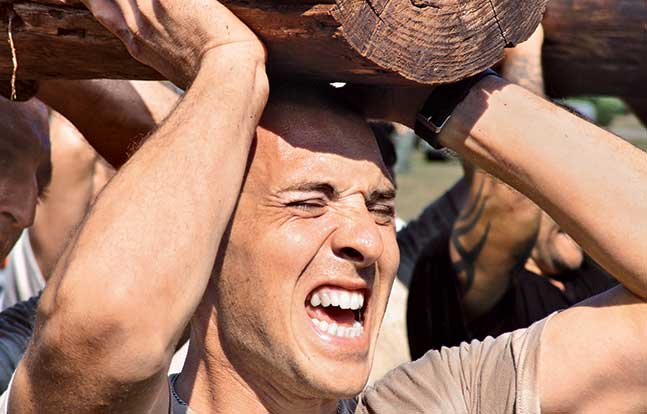 8 of 8
Agency Spotlight: Calvert County SWAT
Similar to the U.S. Navy SEALs, the Calvert County SWAT school trains attendees for operating in all environments—on the sea, in the air and on land. Each training evolution is designed to challenge the candidate’s physical, mental and leadership abilities in conditions well outside of their comfort zones. In the end, like SEAL training this helps build confidence and resilience. Even when the mission seems impossible, Calvert County SWAT operators will be able to prevail. 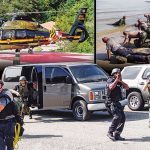 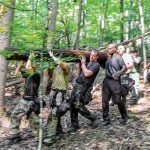 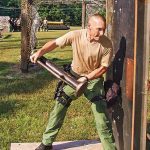 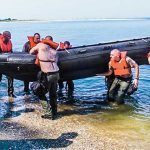 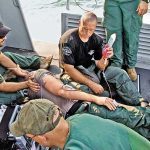 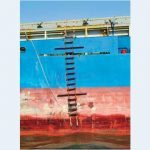 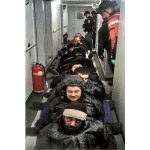 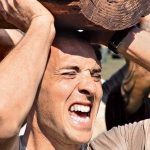 Between Maryland and Virginia is the largest estuary in the United States, the Chesapeake Bay, which is 30 miles wide before it opens into the Atlantic Ocean. Fed from more than 150 streams and rivers, it is an important transit route for large container vessels entering or leaving the Port of Baltimore. Adjacent to and on the bay are various national assets and significant facilities, including the Calvert Cliffs Nuclear Power Plant and the massive Cove Point liquefied natural gas shipping terminal, which fall under the jurisdiction of the Calvert County, Md., Sheriff’s Office (CCSO).

On March 10, 2008, at 8:12pm, Captain Ricky Thomas, the commander of the CCSO SWAT team, was at home when he was alerted that the Ocean Victory—a 328-foot, Maltese-flagged, dry-bulk cargo ship with a crew of 14 Ukrainian, Sri Lankan and Pakistani nationals—had a disturbance on board and the harbor pilot had issued a mayday distress call and fled the vessel. The Ocean Victory was operating within the Chesapeake Bay, sailing south after off-loading at the Port of Baltimore. The U.S. Coast Guard told Captain Thomas that a mutiny was occurring aboard the ship; the crew refused to man the required underway watches, meaning it wasn’t being navigated. Law enforcement action was required to seize and secure the large vessel before it collided with another vessel, ran aground or struck one of the nearby facilities, as well as take the mutinous crewmembers into custody.

“Preparedness and flexibility are the keys to tactical success and operational supremacy.”

That mission fell to the CCSO SWAT team. Captain Thomas is a 24-year veteran of the CCSO and its SWAT team, and his father was one of the country’s first SWAT operators and helped found the Prince George’s County Police Department Emergency Services Unit. In less than 90 minutes, Thomas and his team organized, linked up with their Coast Guard escorts and began the non-compliant boarding of the Ocean Victory not knowing if they would be met with violence or gunfire as they approached the ship in choppy seas in the dead of night. The SWAT operators held onto the assault boat and their weapons as cold saltwater spray pelted them while the pitching steel hull of the cargo ship loomed larger and larger before them. It was VBSS time—visit, board, search and seizure.

The Calvert County SWAT team has one of the most challenging and comprehensive qualification courses in the entire country. The course is offered every two years and has both CCSO trainees as well as guest students. This year included personnel from Calvert Cliffs Nuclear Power Plant security, the U.S. Marshals Service, the Prince George’s County Sheriff’s Office, the Tacoma Park Police Department, the St. Mary’s County Sheriff’s Office and the Charles County Sheriff’s Office. The multi-week course is physically tough, as it draws from U.S. Army Ranger and Navy SEAL techniques for physical training and teamwork challenges on both land and in the water. The course evolutions also include serving off-hour warrants and hostage-rescue operations based on actual operations, like the one that resulted in the CCSO SWAT team receiving the Medal of Valor from the Maryland Sheriff’s Association.

The Calvert County SWAT team recently responded to a hostage situation after a domestic disturbance escalated and became violent. Although there had been several calls from the scene, it was unclear as to what exactly had happened and who was even inside the structure. Using a ReconRobotics Throwbot XT, a small reconnaissance robot deployed inside the house, the team identified at least one person down with blood splatter and made an immediate entry. The SWAT team found one person, most probably the shooter, on the floor with a fatal self-inflicted gunshot wound.

The team, some trained firefighters, also noted that one of the interior bedroom doors was hot to the touch and bowing outwards, and smoke had begun to collect overhead. The team ventilated the room from the outside and then entered the blazing room. Although they found two more lifeless victims, the team heard a small voice saying, “Help me,” from the bathroom—a child had immersed himself in a bathtub to protect himself from the flames and heat. With no time to spare, the child was quickly extracted. He survived because the team was not only well-versed in SWAT tactics, but also in firefighting and the use of respirators, allowing them to continue to operate without pause until the situation was resolved with the best outcome possible: a child’s life saved.

The CCSO SWAT qualification course has practical classes on using gas, respirators and dealing with HAZMAT situations as well as rope work and firearms training. The CCSO SWAT operators train hard with their FN long arms, including the FN SCAR 16 in 5.56mm NATO, the unique FN P90 submachine gun chambered in 5.7x28mm, scoped SPR A3G and A5M rifles in 7.62mm NATO and .300 Winchester Magnum, and even the .68-caliber FN 303 less-lethal launcher. Why the heavy use of FN products? Captain Thomas said, “FN has great reliability. As a matter of fact, I can’t remember a time when one of our FN weapons did not function when needed. In addition, the accuracy is exceptional, and we are especially fond of our sniper rifles [the FN SPR A3G and A5M] and the FN SCAR 16 carbine, which is our primary long gun for the team.”

According to Captain Thomas, “We are in the process of transitioning the whole SWAT team to FN pistols and phasing out our previous autoloader.” Thomas went on to describe the need to have reliable, rugged and accurate weapons as well as highly trained operators for his full-time SWAT: “Our team maintains a very high operational tempo, responding to all of Calvert County’s emergency petitions [three to five a week] as well as, on average, close to 100 high-risk search warrants, a dozen barricaded suspects and a couple hostage rescues per year.”

In addition to the standard SWAT course material, the student operators are given advanced instruction in areas such as tactical medicine, explosive breaching, tactics in both urban and woodland terrain and specifically unique maritime tactics for approaching, boarding and clearing vessels of all sizes. Captain Thomas recognized that his jurisdiction covers a vast amount of water, including parts of the Chesapeake Bay, which is normally filled with commercial vessels of all kinds, so he had his SWAT team trained and certified (with only a few other special operations teams in America) to board “non-compliant” vessels. As a result, when the Port of Baltimore harbor captain was informed of the mutiny on the Ocean Victory offshore of Calvert County, the first call was to Captain Thomas, who was geared up and on the water with his team in 62 minutes.

While bad guys present various threats, operating in a maritime environment is a constant danger that can only be mitigated by correct training. Making an opposed entry into a structure is a tough tactical problem, but when you’re performing that action at night between two moving vessels of different sizes in rough seas, the difficulty is magnified. One misstep, a lost grip or a momentary failure to maintain situational awareness can put a whole boatload of heavily loaded operators under the hull of a ship faster than reading this sentence.

This was on the minds of the CCSO SWAT operators who were briefed as they approached the Ocean Victory. Thomas and his team were unsure of how they were going to scale the steep steel sides, let alone what they would find on board. Luckily they saw that the Jacob’s ladder used to board the harbor pilot was still deployed from the deck of the ship down to the water level. The SWAT operators covered each other as they climbed the ship’s ladder to secure first the main deck and then moved to secure more important areas of the ship, including with the wheelhouse and engine room.

The team swept through the ship with their FN SCAR carbines on their shoulders and took the bridge and engine room to make sure the ship’s speed and course was under control. After the ship was placed in a safe condition, Thomas directed his team to take control of various spaces of the ship and roundup the entire crew. The crew, mostly drunk and somewhat belligerent but not violent, was placed under close guard, tightly packed together to make it harder for them to move around and easier for the team to control. The team arrested the entire crew and captain for various crimes, including mutiny, and the next day the full weight of the federal government descended on the scene.

The 13-man CCSO SWAT team was on board the Ocean Victory 87 minutes after Captain Thomas answered the phone. Just like the hostage rescue situation where the team saved a young boy from a blazing crime scene, CCSO SWAT was able to successfully seize a 328-foot freighter underway at night with no casualties or mistakes because they were fully prepared, trained and were ready for the call. The nature of special LE operations requires this, as no two situations are ever the same. Preparedness and flexibility are the keys to tactical success and operational supremacy.

As a direct result of the Calvert County Sheriff’s Office’s full-on, high-speed SWAT school training, dedicated operators and the best FN weapons and equipment, Captain Ricky Thomas and his team will continue to challenge and prevail in the toughest environments and conditions. 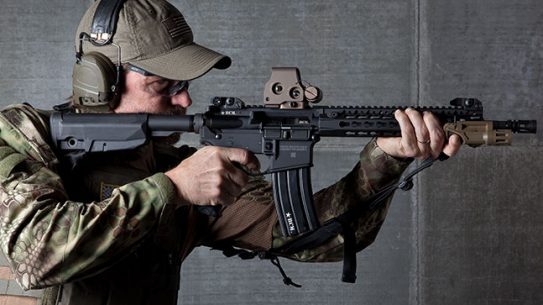 Tactical-Life: 6 New Products That Caught Our Eye in SWMP October 2014

The editors of SPECIAL WEAPONS FOR MILITARY & POLICE (SWMP) have selected their favorite...