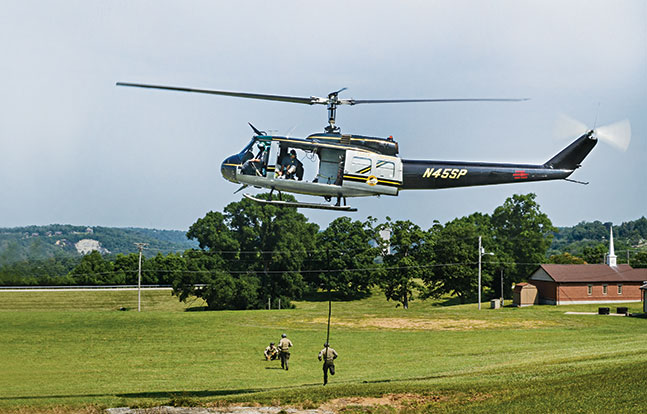 1 of 4
Agency Spotlight: Kentucky’s Elite Enforcers
The KSP aviation unit has several helicopters, including the ubiquitous Bell Huey, and trains in tactical insertion techniques and rescues. 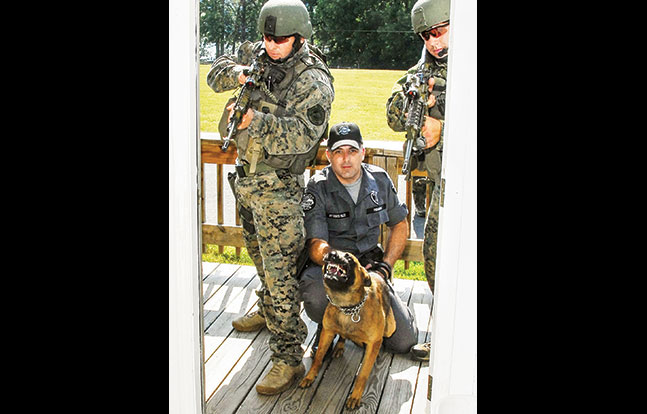 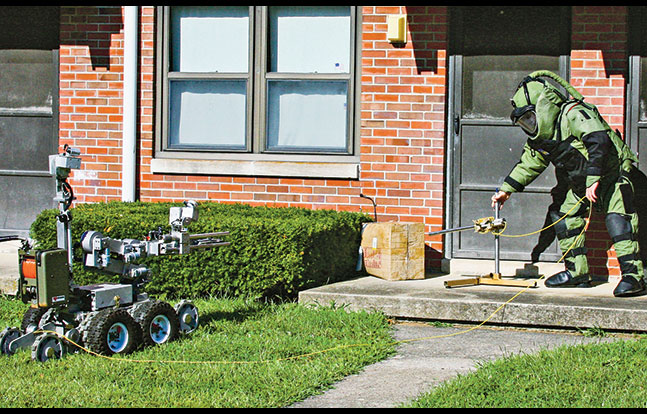 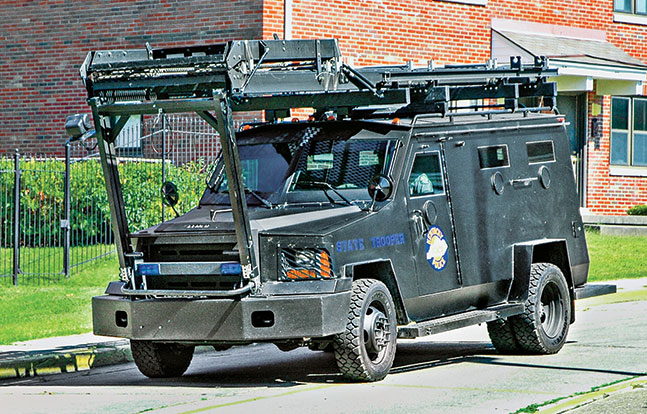 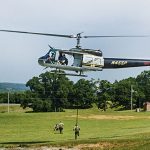 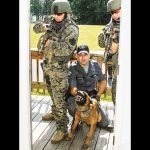 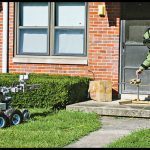 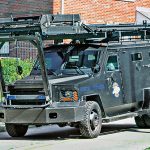 The Commonwealth of Kentucky is known as the “Bluegrass State.” The 15th state to join the union, Kentucky is famous for Jim Bean bourbon, fried chicken and, of course, the derby.

The Kentucky State Police (KSP) is responsible for providing law enforcement services and support for over 40,000-plus square miles. Since being formed in 1948, the agency has grown to over 1,000 sworn officers stationed at 16 posts. Unlike most state and local agencies, the KSP maintains a full-time, highly trained Special Response Team (SRT) that consists of 11 troopers and one sergeant. The unit is assigned under the Special Operations Branch, which is also responsible for the Canine and Hazardous Devices sections.

The KSP SRT unit is the only full-time tactical team in the state. The unit responds to an average of 70 calls a year. The unit handles the normal SRT responsibilities, such as high-risk warrants and barricaded gunman/hostage situations. However, much of the unit’s time is spent conducting counter-drug surveillance, assisting the aviation section with marijuana eradication, and fugitive investigations. In addition, the SRT assists in providing security for large-scale events such as the Kentucky Derby and the Quaker State 400.

Jacks Of All Trades

Being a multi-purpose team requires these troopers to be “jacks of all trades,” meaning they must receive a wide variety of specialized training. While this training includes the normal entry and hostage-rescue techniques, the team also receives regular training in tactical tracking, wilderness operations, breaching and tactical medicine. The unit also works closely with the KSP aviation section and trains in aerial marksmanship, search and rescue, and aerial rope operations.

To maintain these skills, the unit spends as much time as possible training. This training curriculum is made easier by all members of the team being full-time and stationed at the same location. The initial SRT operator course consists of 40-plus hours and involves over 20 basic tactical skills. This ongoing training also includes members attending the most elite tactical and shooting schools in the country. The team has completed Advanced Hostage Rescue, Urban Sniper and Tactical Medical Integration courses from Paul Howe at Combat Shooting and Tactics. Howe is a former Delta Force team leader who was involved in the Battle of the Black Sea, also known as “Black Hawk Down.” The SRT has also attended training at TMACS and the Mid-South Institute of Self-Defense Shooting.

Being constantly on call requires the team to work from specially equipped SUVs that are a combination of armory, office and camper. The vehicles carry a variety of equipment, including firearms, ammunition, other munitions, body armor and surveillance gear. Given their wide range of missions, the troopers must carry their equipment with them at all times. The team also uses a Lenco BearCat when the mission requires an armored vehicle. In addition, the SRT has two Chevrolet Tahoes that are equipped to serve as mobile command posts.

The agency’s history of duty weapons is interesting. During the mid-1990s, the KSP followed the lead of the FBI and issued the Smith & Wesson 1076 in 10mm. During the late 1990s, the agency was looking for a reliable and compact backup pistol in a service caliber. The .40 caliber Glock 27 was evaluated and then approved. In 2004, after an extensive testing program, the agency transitioned to the Glock 35 as the standard service pistol. The G35 has a 5-inch barrel and ported slide which helps manage the recoil of their issued Speer 155-grain Gold Dot hollow-point ammunition. The agency was impressed with the reliability of the Glock as well as its magazine capacity. In 2012, the agency upgraded from Gen3 to Gen4 G27s and G35s.

I recently spent two days with the fine men of the SRT unit during a Helicopter Aerial Rifle Marksmanship (HARM) program hosted by the KSP. While the unit had conducted internal training on aerial marksmanship, the HARM program presented a unique opportunity. The course was developed by Greg Coker of Shield 91 while he was serving as an AH-6 pilot with the U.S. Army 160th Special Operations Aviation Regiment (SOAR). Coker is an exceptional pilot as well as an avid shooter. This combination resulted in Coker developing the HARM program, which was validated and is currently in use by the U.S. military and several law enforcement units.

The complete KSP SRT unit attended the training, along with officers from other Kentucky, Florida and Indiana agencies. The SRT ran their HK416 rifles equipped with Aimpoint optics, SureFire lights and AN/PEQ laser units. The rest of the class used a variety of M4 5.56mm carbines, with the exception of two officers who ran 7.62mm LaRue Tactical OBRs. The KSP aviation section provided pilots and their OH-6 and OH-58 helicopters. The class emphasized crew coordination and the marksmanship skills needed to engage a target from a moving aircraft. The initial flight profile started with the aircraft at an altitude of 100 feet and a speed of 40 knots. Shooters learned to track the target, keep the rifle moving and sight in. The HARM class is typical of the advanced training that the SRT attends.

One SRT trooper told me about one of their recent missions, where the team was activated in response to shots fired involving KSP troopers. The troopers were responding to a residence because of a reported disturbance, possibly domestic. When troopers arrived, a subject opened fire from a concealed and elevated position in the woods. The troopers returned fire, gained cover and set up a perimeter. The SRT was activated. Half of the team deployed in a helicopter, while half responded by vehicle. The team used the Lenco BearCat to evacuate several troopers that were pinned down during the initial gunfire. The helicopter, with two countersnipers aboard, provided overwatch. Two SRT operators then rappeled down onto a ridgeline above the subject. The troopers closed on the suspect, who was found deceased from a self-inflicted gunshot.

The citizens of the Commonwealth of Kentucky are protected by one of the most elite special operations law enforcement units in the country. During the team’s 24-year existence, only 52 troopers have worn the SRT patch. With ages ranging from 28 to 42, the members share a common bond and sense of purpose. This is reflected in the team’s motto, “Custos Fratris Mei,” or “My Brother’s Keeper.” Should you travel through the Bluegrass State, rest well knowing that you are protected by this group of dedicated professionals. 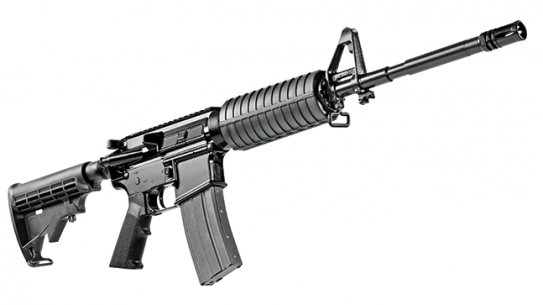 The DTI Extreme Duty is a tank-tough Del-Ton AR that Gungoes way beyond mil-spec...