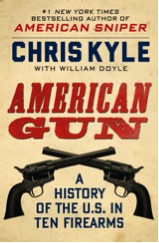 At the time of his tragic death in February 2013, #1 New York Times bestselling author Chris Kyle was finishing one of the most exciting missions of his life: a remarkable book which would examine American history through the lens of ten iconic guns. AMERICAN GUN: A HISTORY OF THE U.S. IN TEN FIREARMS (William Morrow; June 4, 2013; 9780062242716; $29.99), by Chris Kyle, written with William Doyle, with editorial contributions by Jim DeFelice, featuring a forward and afterward by Kyle’s widow, Taya Kyle.

“Perhaps more than any other nation in the world,” Kyle writes, “the United States has been shaped by the gun. Firearms secured the first Europeans’ hold on the continent, opened the frontier, helped win our independence, settled the West, kept law and order, and defeated tyranny across the world.”

Drawing on his unmatched firearms knowledge and combat experience, Kyle carefully chose ten guns to help tell his story: the American long rifle, Spencer repeater, Colt .45 revolver, Winchester rifle, Springfield M1903 rifle, Thompson sub-machine gun, M1911 pistol, M1 Garand, .38 Special police revolver, and the M-16 rifle platform Kyle himself used as a SEAL. Through them, Kyle revisits thrilling turning points in American history, including the single sniper shot that turned the tide of the Revolutionary War, the firearms designs that proved decisive at Gettysburg, the “gun that won the West,” and the weapons that gave U.S. soldiers an edge in the world wars and beyond.

Kyle, the top sniper in U.S. Military history, shared the story of his ten years of military service in AMERICAN SNIPER: The Autobiography of the Most Lethal Sniper in U.S. Military History (William Morrow, 2012), which became an international bestseller, with over one million copies sold.

“In the last year of his short life, Chris was able to reflect on the varied experiences he had with guns and the way he used them through every stage of his journey,” writes Taya Kyle in the book’s foreword. “As you read AMERICAN GUN, I hope you feel the presence of Chris with you. As you take a walk back in time with him, I hope you feel the excitement he had as you explore the remarkable role these guns had in shaping our great nation.”

AMERICAN GUN is ultimately a reflection of the people, families, sacrifices, heroism, and humanity that shaped the nation.
– MORE –
About the Authors:
SEAL Team 3 Chief Chris Kyle (1974-2013) served four combat tours in Operation Iraqi Freedom and elsewhere. For his bravery in battle, he was awarded two Silver Stars, five Bronze Stars with Valor, two Navy and Marine Corps Achievement Medals, and one Navy and Marine Corps Commendation. Additionally, he received the Grateful Nation Award, given by the Jewish Institute for National Security Affairs. Following his combat deployments, he became chief instructor for training Naval Special Warfare Sniper and Counter-Sniper teams, and he authored the Naval Special Warfare Sniper Doctrine, the first Navy SEAL sniper manual. A native Texan, he served as president of Craft International, a world-class leader in training and security, while devoting much of his spare time to helping veterans. Chief Kyle is survived by his wife and their two children.

HBO’s former director of original programming/executive producer, William Doyle is the award-winning author of A Soldier’s Dream: Captain Travis Patriquin and the Awakening of Iraq, Inside the Oval Office: The White House Tapes from FDR to Clinton and An American Insurrection: James Meredith and the Battle of Oxford, Mississippi, 1962. He won the Writers Guild of America Award for Best Documentary for his A&E special based on Inside the Oval Office.

Jim DeFelice is the co-author of AMERICAN SNIPER. Additionally, he has written several acclaimed military thrillers, including the Rogue Warrior series from Richard Marcinko, founder of SEAL Team 6, and novels in the Dreamland series with Dale Brown. He is also the author of Omar Bradley: General at War, the first critical biography of America’s key WWII general.