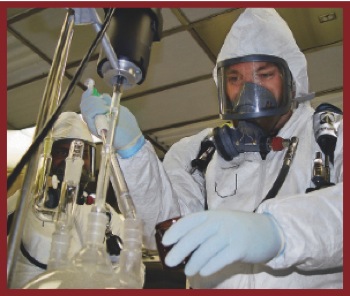 The Clock Is Ticking. This is the dismal forecast predicted for America, as well as the title of a report that was just released by the US Commission on the Prevention of Weapons of Mass Destruction Proliferation and Terrorism. The Commission’s report offered a deadly scenario where a one to two kilogram amount of Anthrax spores might be released by a crop-duster plane that could potentially kill more Americans than died in World War II. Additionally, there would be clean-up costs and various other monetary expenses that could exceed $1.8 trillion. These are very scary statistics — not only is there the psychological goal met of creating fear and a massive death toll, but the terrorists would also cause great economic damage. Of course we all recall the lethal anthrax letters mailed shortly after 9/11 that terrorized the freshly damaged psyche of the American public. The Federal Bureau of Investigation refers to the case as Amerithrax, and the incidents occurred over the course of several weeks beginning on September 18, 2001. Numerous letters containing anthrax spores were mailed to several news media offices and two US Senators. These letters resulted in the deaths of five people and infected 17 others, with complete clean-up costs exceeding $1 billion, with some locations taking over two years to decontaminate.

Could al–Qaeda inspired Jihadists or some other politically motivated terrorists consider such plans? Absolutely! al-Jazeera recently played a video of a Kuwaiti professor who was encouraging these types of attacks. In the video the professor spoke to his audience about the courage of one “fighter” to carry a suitcase of anthrax into America, entering through tunnels from Mexico and if properly disseminated in large population centers would be guaranteed to kill 330,000 Americans within a single hour. He goes on to say such an anthrax attack as this would make the September 11th, 2001 strike on America look like “small change” in comparison.

What exactly is Anthrax? Anthrax (Bacillus Anthracis) is a spore-forming bacterial disease common to cattle and livestock. These spores can survive for decades and are resistant to heat, microwaves and ultraviolet light. The lethality of the spores is their production of toxins and as we already discussed, nefarious parties could use anthrax as a weapon. Examples of such an attack are the deliberate infliction on humans via inhalation or ingestion of freeze-dried powdered anthrax spores delivered by an aerosol dispersal device (the crop duster scenario), or these deadly spores could be prepared in a liquid form and sprayed onto a target location.
Anthrax can enter a person’s body via three different points of entry: through the intestines (ingestion), lungs (inhalation), or the skin (cutaneous). The most common form of infection is through the skin. The symptoms show up as a boil-like skin lesion, eventually forming an ulcer with a black center, which progresses as an irritating and itchy skin lesion or blister that is dark and usually concentrated as a black dot at the site of infection. Cutaneous infections generally form within the site of spore penetration between 2 to 5 days after exposure and if left untreated this type of infection will kill one in five people.

The second entry way is ingesting the spores (i.e. consumption of contaminated meats), which will cause victims to lose their appetite, begin to vomit and suffer a fever. If left untreated it will progress on to diarrhea and vomiting blood, ultimately leading to a 25% to 60% mortality rate.

The most lethal form of infection is inhalation, or a respiratory infection when someone breathes in the spores. The victim will present with cold or flu-like symptoms for several days, followed by severe respiratory distress or collapse. There is a high mortality rate, over 90% with inhalation of anthrax. The crucial time period for successful treatment with antibiotics for patients with this type of infection is 24 to 48 hours after the initial inhalation, if there is any chance of the victim surviving.

Early detection is the key — if this type of attack is not recognized early enough, in just mere days after the exposure, infected victims will go to their doctor or hospital emergency room for what they believe are symptoms of a bad cold or flu, but by then it may be too late for effective antibiotic treatment. This is terrorism at its apex, when you imagine the panic and dread people would experience when informed by medical professionals that there is no hope for their survival and only certain death awaits them.

The Clock Is Ticking. This is the dismal forecast predicted for America, as well…