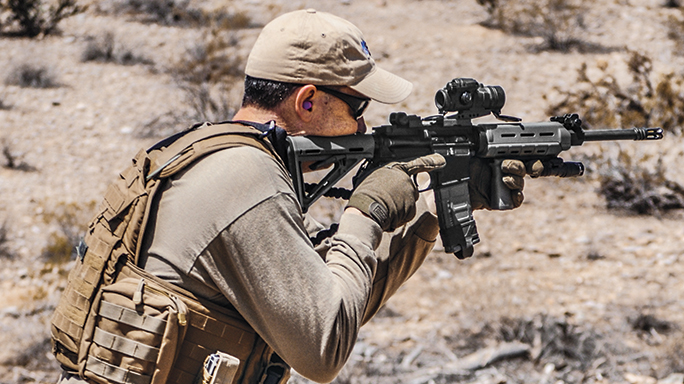 1 of 3
AR-15 Corner: Patrol Rifle Evolution
“… a handgun is nothing more than a weapon to help you fight your way to a rifle. ” 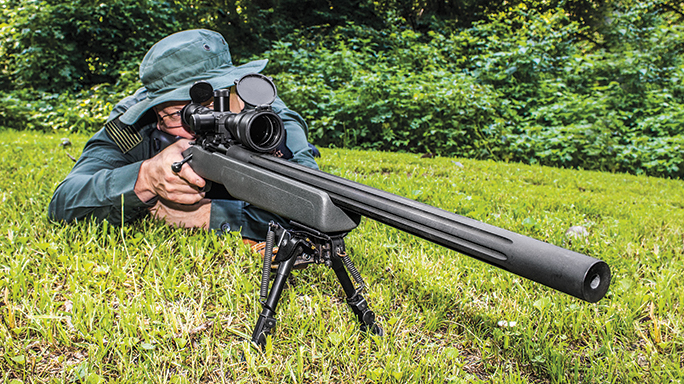 2 of 3
AR-15 Corner: Patrol Rifle Evolution
While bolt actions have ruled the precision rifle world for decades, ARs are becoming popular for snipers, too. 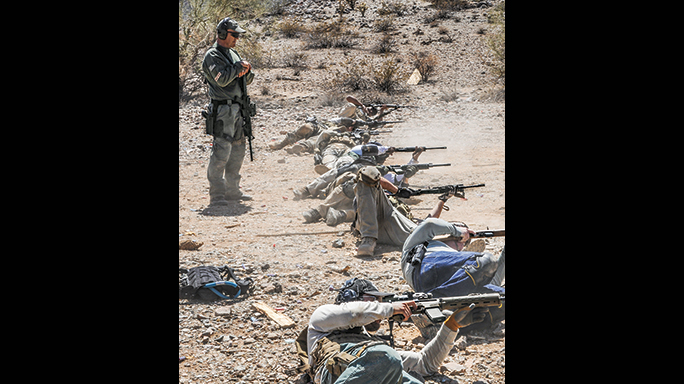 3 of 3
AR-15 Corner: Patrol Rifle Evolution
Training has evolved along with the rifles officers carry to replicate realistic scenarios. 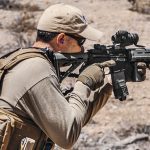 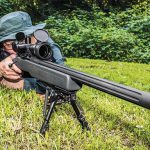 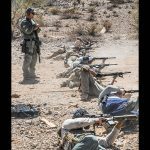 On Feb. 28, 1997, an LAPD patrol unit called for assistance with a “211 in progress,” or an armed robbery. “Shots fired! Require backup,” quickly followed that call.

This call would forever change the law enforcement weapons culture. This was of course the infamous North Hollywood shootout where the LAPD ended up engaging two heavily armed suspects determined to avoid capture after a bank robbery. 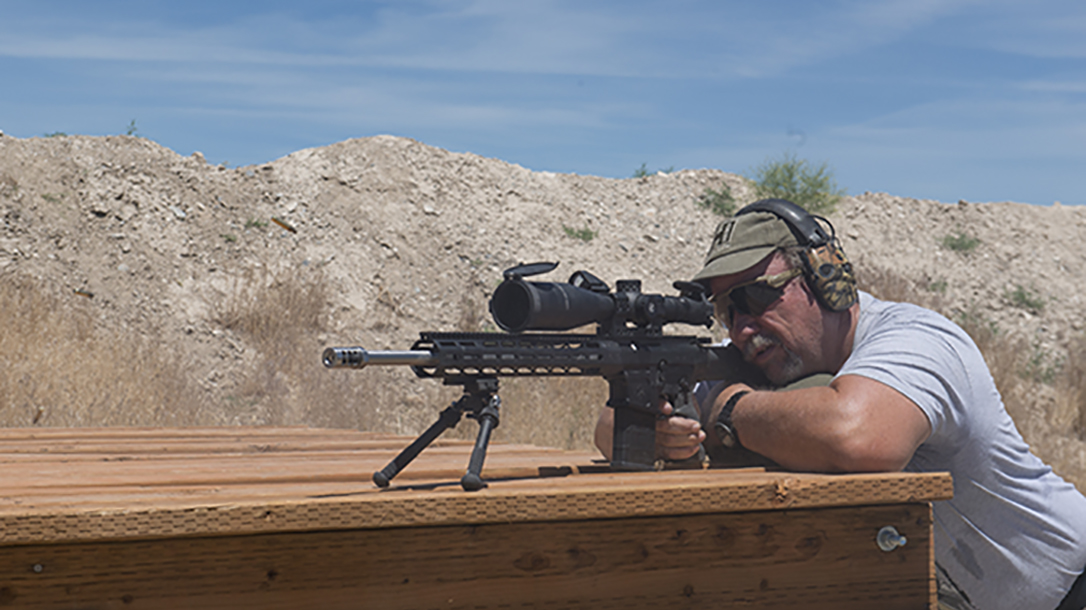 The two assailants were armed with fully automatic rifles while the responding officers were relegated to a variety of handguns and the rare shotgun. The two suspects also utilized body armor, which the police stood little chance of defeating with handguns. This situation eventually drove several officers to enter a local gun store, where they secured rifles to engage the suspects. The fight continued until SWAT arrived and the suspects were stopped.

In the end, both sides had fired over 2,000 rounds, and when the smoke cleared, 18 people were injured and two were dead. This was one of the longest and bloodiest shootouts in American law enforcement history.

The incident sent ripples through the law enforcement community around the country. It became evident that a glaring hole in firepower existed in the standard officer’s loadout. Debate started, and the voices of officers heard. They needed rifles. While there have always been agencies that deployed rifles with their standard patrol officers, a vast majority of agencies only issued handguns and the occasional shotgun as their general weapons package. The detailed review of the events in North Hollywood, however, became the catalyst for agencies across the U.S. to review their policies regarding rifles.

At first, many agencies scrambled to get rifles into patrol divisions. It was a mixed bag of weaponry ranging from Ruger Mini-14s to M1 Carbines. The rifle that ultimately would take center stage, however, was the AR-15. Taking its cue from the military, most agencies began to adopt the AR-15 as their primary duty rifle. It is lightweight, easy to shoot and was relatively inexpensive with which to equip an agency. Additionally, many officers across the country had prior military service and were already familiar with the AR-15 platform. This allowed for a fairly smooth integration of the rifle into service.

Partly influenced by law enforcement agencies around the world, we’ve seen the evolution of the patrol rifle here in the United States. Progressive U.S. agencies did their homework and looked at what their professional brothers and sisters were carrying abroad. What was ultimately concluded was that whatever rifle they chose, it had to serve in a specific role, a role that had the potential for diversity that would challenge most weapon systems. This only solidified the place of the AR-15. 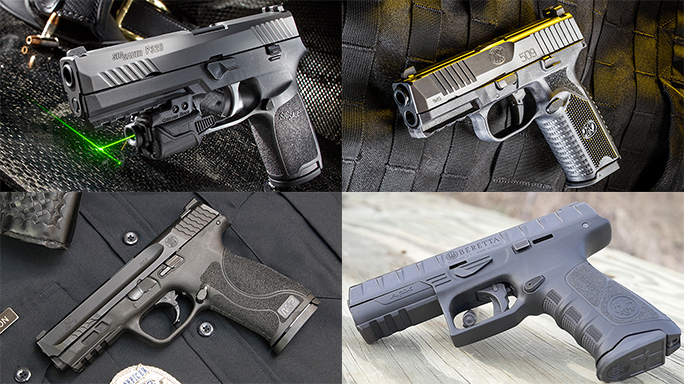 Jump forward 20 years and we now see the current state of the patrol rifle in law enforcement culture. It is set in stone, and you would be hard pressed to get most officers to give up the comfort that a carbine brings.

What is not as set in stone are the configurations and brands of rifles in service. LE carbine classes are many times filled with a variety of rifles. From old Bushmasters with fixed carry handles to BCM carbines fitted with enough hardware to land the space shuttle, we see it all.

One of the reasons for this variety is that many agencies across the country allow officers to purchase their own weapons and use them on duty. They submit their request, and most agencies compare it to an “approved rifle” list. While this is financially beneficial to the agency, it creates a mixed bag of hardware. Add to that the inevitable customization of rifles, which is more a rite of passage than an option. This creates a potentially problematic diversity of rifles inside an agency.

The biggest problem arises in “cross use”—when another officer may need to deploy your weapon. They need to be as familiar with it as they are with their own. The willingness of agencies to allow such a wide spectrum of guns and modifications has the potential to come back and bite them at some point. Still, any rifle is better than no rifle.

It has been said that a handgun is nothing more than a weapon to help you fight your way to a rifle. That phrase has some merit. The world is a dangerous place, and those who choose to wear a badge step into that danger on a daily basis. The addition of a patrol rifle to an officer’s available equipment is nothing but a positive. The hope is that it is never deployed, but if a North Hollywood event should happen again, agencies across the U.S. and around the world are better prepared to engage and stop the threat. 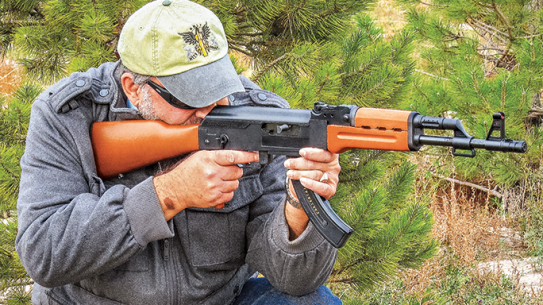 Mossberg’s Blaze-47 serves as the ideal .22 LR to feed your shooting needs!