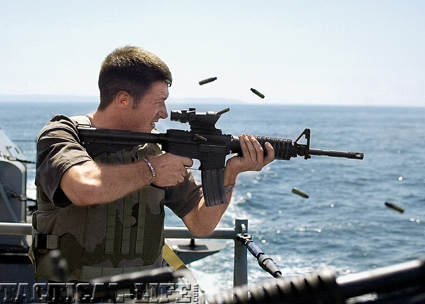 A midshipman training with an M4 aboard USS Monsoon would benefit to learn the Push/Pull, Rack & Roll compared to SPORTS clearance method.

It has been said that the loudest sound a firearm ever makes is a “click” when one expects a “bang.” Regardless of whether you are engaged in a hunt, a competitive shooting match on the clock, or in a fight for your life, the purpose of shooting is to hit the target and you cannot do that if a projectile never leaves the barrel. Correcting the issue is a consumer of time, and the consequences of that consumption of time depend on the critical nature of the reason you are trying to hit the target. In a hunting situation you may miss your dinner, in a match you may not come in first, but in a fight the potential consequences are far more dire.

In the AR-platform the number one cause of a click instead of a bang is operator error. The shooter has failed to correctly seat the magazine in the gun, has then run the charging handle “cocking” the action and, because the magazine is not seated, the bolt has failed to chamber the first round resulting in a click instead of a bang when the trigger is pressed. Another variation on the theme is that the magazine is just high enough to chamber the first round but upon firing the magazine drops down just enough that the second round will not chamber, resulting again in the click instead of the bang. The #2 cause is a “dud” or a non-firing cartridge. Causes can range from hard primers, no primer, primers seated backwards, no flash hole in the case, etc. but the result is the same: no projectile leaves the barrel and the action is not cycled. Having a process that addresses both the number one and two causes is advisable.

U.S. Army’s S.P.O.R.T.S.
U.S. Army Field Manual 3-22.9 (FM 3-22.9) Chapter 3 Section 1 outlines the definition of the term “Stoppage” and breaks down the method for clearing a stoppage into two types or steps. The first is “immediate action” or “quickly applying a possible correction to reduce a stoppage without performing troubleshooting procedures to determine the actual cause.” The manual outlines the process, committed to memory through the acronym S.P.O.R.T.S., for applying immediate action as the soldier:

-Slaps gently upward on the magazine to ensure it is fully seated, and the magazine follower is not jammed (see note).

-Pulls the charging handle fully to the rear of the rifle.

-Observes for the ejection of a live round or expended cartridge. (If the weapon fails to eject a cartridge, perform remedial action.)

-Releases the charging handle (do not ride it forward).

-Squeezes the trigger and tries to fire the rifle.

There are several potential issues with this process:

Slap. The primary issue with slapping the bottom of the magazine is that the magazine can release rounds into the chamber from the force. This is often referred to as the “volcano effect” when multiple rounds are released into the chamber area, but even one loose round in the upper receiver prior to releasing the bolt will cause a double feed. FM 3-22.9 even addresses this potential with “see note;” “be careful not to knock a round out of the magazine into the line of the bolt carrier, causing more problems.” Additionally “slap” does nothing to ensure that the effort is successful in seating the magazine. Finally by introducing the “slap” as an acceptable method of seating the magazine, you are also indirectly teaching shooters to use it as part of their initial loading sequence (which also all-too-often incorporates locking the bolt to the rear before beginning) or as part of their emergency reload. 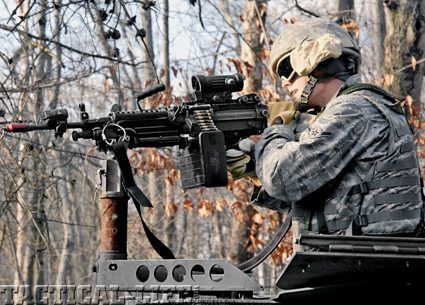