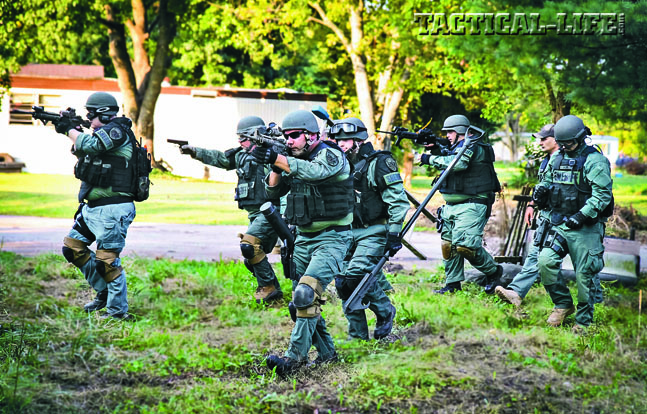 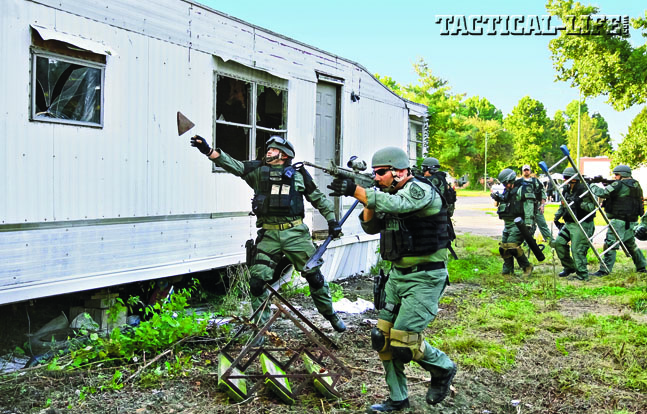 2 of 4
Athen’s County Sheriff’s Office | Agency Spotlight 1
Special Response Team deputies move in to break and rake the windows of a trailer during a simulated entry. 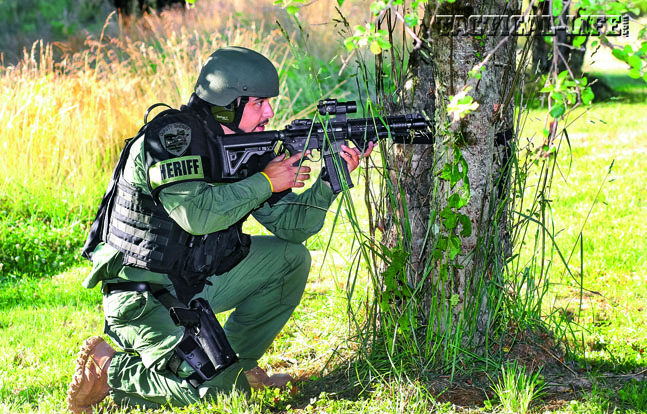 3 of 4
Athen’s County Sheriff’s Office | Agency Spotlight 2
An ACSO SRT deputy takes a position behind a tree as he covers the perimeter with an AR-platform rifle during a training exercise. 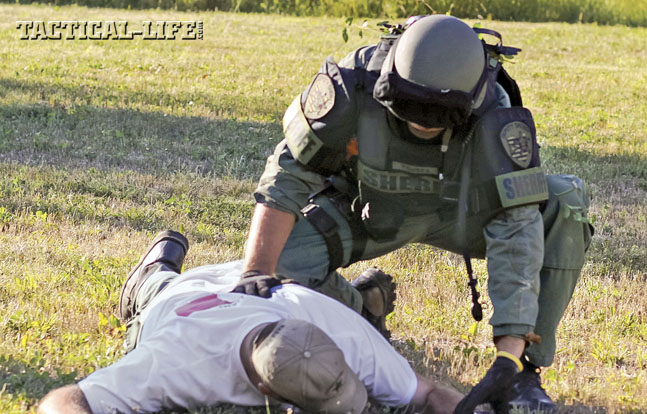 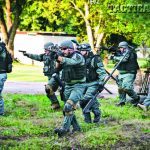 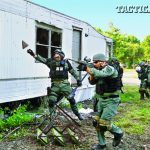 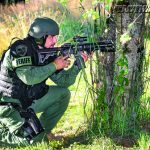 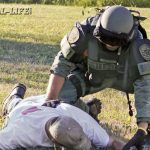 Sometimes, officers who work in large municipalities packed with many thousands of citizens feel their agency, or their type of agency, is the “be all, end all” when it comes to effective law enforcement. If you work for a suburban department, a rural agency or a small village, your law enforcement service may not be held in the same level of regard by some of those who work in the megalopolis. If you are a rural deputy, you may be thought of as working in a Mayberry-like atmosphere, rarely facing the troubles that your big city brothers and sisters do. Part of that viewpoint can be true. In rural areas, there is often not the same frequency of crime that is found in the major cities. However, in rural agencies, there is not the same amount of manpower available to handle those problems when they do occur. You and your agency have to handle it with fewer resources than big city agencies.

With the right leadership, it is possible for a rural sheriff’s office to not only operate efficiently, but to innovate, to do things that, in some cases, no other agency large or small has thought of doing. Sheriff Pat Kelly and his chief deputy, Captain Bryan Cooper, of the Athens County Sheriff’s Office (ACSO) in Ohio are leaders who show what can be done when members of the agency have vision. More importantly, they value vision from all levels of the department. As Captain Cooper put it, “Why spend all the time and money finding quality deputies, and then tell them…no one wants to hear their opinion?” Great question.

Sheriff Kelly is starting into his fifth year in office. Ohio sheriffs serve four-year terms with no term limits. It is evident that Sheriff Kelly is unique among leaders. He trusts the people he’s hired and does everything he can to facilitate their safety and efficiency while serving the public.

Athens County consists of 508 square miles of rugged wooded hills and farms, along with the recreational area of the Wayne National Forest. The population is approximately 70,000. The county seat, the City of Athens, is home to Ohio University. The sheriff’s office building is situated square in the middle of this college town. When needed, the sheriff’s office obtains mutual aid from the Athens City Police, the Ohio University Campus Police and the Nelsonville Police Department. Likewise, the ACSO reciprocates when aid is needed by those agencies.

To serve its residents, the ACSO has a total of 24 full-time sworn units. This includes the sheriff, who will also go out and handle calls with his deputies. Within those ranks, there are five lieutenants and no sergeants or corporals. Fourteen deputies are on the department’s Special Response Team (SRT), and two deputies work court transport duties. There are four detectives and one K-9 unit. There is no jail. Prisoners are held in the Southeast Ohio Regional Jail in Nelsonville. Dispatching is done by the countywide 911 center.

There are also 30 active reserve deputies to augment the full-time units. Level I deputies pair up with full-time deputies and are fully certified, equipped and uniformed like their paid counterparts. Level II deputies are not sworn, but they perform specialized administrative functions within the agency. This includes senior citizens in a program Sheriff Kelly initiated called Seniors and Law Enforcement Together, or SALT. One of the Level I deputies is a certified canine officer who volunteers his dog and his time for patrol duties.

Here is where the ACSO excels at innovation, and moving beyond the old “that’s the way we’ve always done it” mentality. Each deputy is issued his or her own vehicle—cruisers for road deputies, plain cars for detectives. Most plain cars come from asset forfeiture. Take-home vehicles are not as expensive as one would think. Why? First, the cars are not being driven 24 hours per day by multiple units. Second, and this may be the most important reason, is that the deputies tend to take better care of their personally issued cars, making sure all maintenance work is done and their appearance is kept up. Current patrol cars are a mixture of Dodge Chargers and Ford Crown Victorias. Because they felt the new Ford Taurus Interceptors didn’t have enough room up front, the department purchased several Ford Explorer Interceptors, with 305-horsepower, 3.7-liter V6 engines and all-wheel drive. This gave them far more room both in front and in the rear, better visibility, pursuit-capable handling and, of course, full-time all-wheel drive, which will prove to be of great benefit during winter patrol.

The ACSO issues either Glock 22 or Glock 23 duty pistols depending on assignment, stoked with 180-grain Winchester Ranger JHP ammunition. Backup and off-duty guns must be .38 caliber or larger, with a number of the deputies choosing either the .40-caliber Glock 27 or a Smith & Wesson J-Frame .38 or .357 revolver for backup. Every full-time deputy is issued a Streamlight TLR1 weapon light for their duty pistol, and a Safailand Level II duty holster. Remington 870 shotguns with bead sights and AR-15 rifles are also issued to all deputies. The department has three Smith & Wesson M&P15 carbines and nine M16s from the Department of Defense’s LESO program. Deputies may provide their own AR, set up with approved optics and lights, that they purchase. Winchester Ranger 00 buckshot and rifled slugs are the duty loads for the shotguns. The AR duty load is the outstanding Hornady 55-grain TAP round.

Patrol deputies also carry Taser X26s and ASP expandable batons. OC sprays are not a general-issue item, and few units use them since the Taser was adopted. All sworn units are issued 36-inch riot batons.

Sheriff Kelly maintains a 14-member SRT team. Members maintain a regular training regimen and are on call 24/7. Members are notified of a callout on both their iPhones and department-issued iPads. Each member has three uniforms to use based on circumstance: traditional ACSO black with gold emblems, OD green with subdued emblems and a new MultiCam pattern. The team leader and trainer, Detective Brice Fick, says that the SRT has roughly 50 callouts per year, most of which involve the serving of high-risk drug warrants and barricade situations. Two deputies serve as snipers; one is armed with a Remington 700 in .308, and the other has a Savage 110 with an Accu-Trigger. At least one sniper is used for overwatch/observation on every mission. Captain Cooper is one of the department’s hostage negotiators.

Most SRT members use their own ARs, although Sheriff Kelly has been able to begin purchasing select-fire versions of the piston-operated SIG516 with a 10-inch barrel. Detective Fick showed me the first one they had purchased, and it was nicely set up with a SureFire light and an EOTech sight. The department issues no extras for its ARs. If a deputy wants something extra, it will come out of their own pocket.

The sheriff has approved the purchase of suppressors for the SIG516s. For less-lethal situations, the SRT uses single-shot 37mm launchers as well as a dedicated 12-gauge less-lethal system. The team’s “gas rounds” are OC devices—no CN or CS is used. Wooden baton rounds are available for the 37mm launchers, and super-sock-type impact rounds are available for both the 37mm and the 12 gauge. All members are equipped with gas masks, and two units have SCBA gear for dealing with the methamphetamine crisis. Of course, flashbangs are the distraction device of choice.

Currently, the SRT team is facing a significant increase in meth lab seizures. Previously, the rate of lab seizure was one per year, but that was before the meth “tweakers” developed the “one pot” or “shake and bake” method of cooking meth. This method allows meth to be cooked in one container, and only one package of pseudoephedrine bearing over-the-counter medication is needed to cook a batch. Previously, heroin and prescription drugs were the biggest drug problems.

The SRT team has two up-armored Humvees obtained for free from the Department of Defense for their operations, an APC and an MCU medic unit that was donated to them by the Franklin County Sheriff’s Office and converted to SRT duties. This vehicle contains plenty of equipment storage and an onboard diesel generator that can meet all the command post needs that could be asked of it. Detective Fick hopes a Lenco BearCat armored vehicle is in their agency’s future. I am sure that if Sheriff Kelly has a chance to get one, he will. His team needs it.

As is clear, Sheriff Kelly cares about his officers, his department and the county he serves. And, the officers who work under him clearly do as well. Thanks to his unerring guidance and their unswerving commitment, the Athens County Sheriff’s Office ensures the safety of the citizens of this Ohio community. 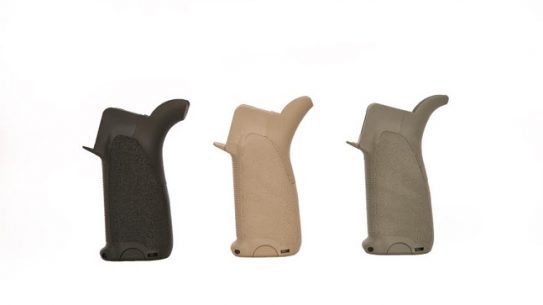 New for 2014, Bravo Company USA announced the release of the BCM Gunfighter Grip...