0
SHARES
3
VIEWS
Share on FacebookShare on Twitter
“Civilians, police and even the military are being taught methods that can get them killed.” So says former detective and crime scene and firearms expert John Perkins in a newly released DVD entitled “Bare Hands to Handguns.” The DVD is the fourth in a 4 part Weapons Series that includes knife fighting and cane and knife defense.

Perkins worked on scores of homicide, rape and assault scenes for the Yonkers, NY Police Lab under Det. Lt. Peter Pizzola (who is now Assistant Commissioner and Head of the NYPD Crime Lab). According to Dr. Pizzola, John Perkins is an “expert in the dynamics of violence.”  Perkins has since provided instruction in armed an unarmed combat for FBI, Police, U.S. Military and international security personnel.

After analyzing thousands of murder scenes to determine precisely how people fought, died or survived, Perkins has developed an innate instinct for separating fictional TV series violence from the real thing. The two, he says, are often confused in martial arts schools and even the police academy. His previous experience as a police officer with over 100 seriously violent arrests and a brief career as an unlicensed pit fighter on the docks of Newark and New Orleans has shown him, he says, what works and what doesn’t when it comes to survival. 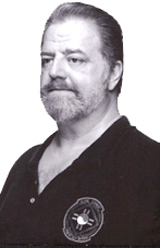 Instead of teaching pre-set responses to gun, knife and unarmed attacks, Perkins stresses adaptability and improvisation based on a set of principles he calls “Guided Chaos.” “Under the adrenaline of a violent assault,” says Perkins, “your brain cannot pick a specific matching defense like a computer. The human nervous system just doesn’t work that way. You have to accept and adapt to what’s actually in front of you.”

Perkins teaches in various locations in the NY area and has a company, Attackproof Inc. that produces instructional books, DVDs and seminars. He has been featured in The New York Times and Black Belt Magazine and has been called by the Trends Research Institute “America’s foremost self-protection expert.”

To purchase your copy of the DVD, visit www.attackproof.com