0
SHARES
0
VIEWS
Share on FacebookShare on Twitter
MARINE WITH .50 EARNS BRONZE STAR
Serving as a Platoon Sergeant in the First Marine Division in Iraq, Staff Sergeant Steve Reichert found himself and fellow Marines in a potentially dire situation. Deployed near the Karch Oil Depot in Lutafiyah, Reichert moved to an overwatch position on top of an oil tank to ensure the safety of one of the squads in the oil depot.

Reichert ascertained that a squad was being surrounded and attacked by large numbers of insurgents and quickly engaged the enemy with his Barrett .50 BMG rifle. Working at ranges of 900 to more than 1,600 meters, Reichert killed multiple insurgents in support of the squad.

During the firefight, two of the Marines in the squad became isolated from the rest of the group, nearly 100 meters away. Reichert held the converging enemy forces at bay with his Barrett until they were able to safely rejoin the rest of their squad.

In complete disregard of his own personal safety, Reichert remained on the line protecting these men even though he himself had become isolated from support by more than 2 kilometers. To make matters worse, Reichert was also receiving friendly fire from a disoriented friendly unit during the engagement.

Once all was said and done, Reichert had nine confirmed kills in addition to doubtless numerous other enemy killed or wounded. In recognition of his bravery and skill in effectively handling a very fluid and dangerous situation, Staff Sergeant Reichert was awarded the Bronze Star for his actions.

Steve Reichert has gone on to found Tier 1 Group (www.t1g.com) designed to offer members of the military community advanced training as well as High Caliber Training (www.hicaltraining.com), designed to offer training for the civilian and law enforcement markets. 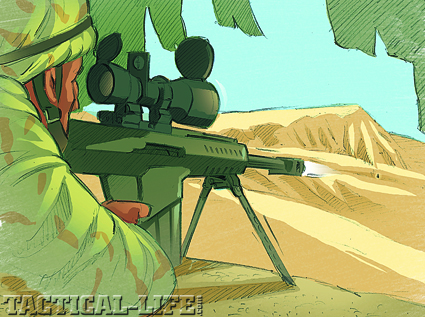 SPECIAL FORCES TEAM HITS ENEMY SPOTTER
My team was in Helmand Province, Afghanistan in a large valley surrounded by high mountains. We were moving to three towns that were located on the other side of a mountain on the north end of the valley. The towns had sneaky routes that the Taliban traveled though.

We intercepted radio traffic that they were setting up ambushes on our route into the town. We scanned the ridges looking for the spotter that was calling in our position. We located him on a ridgetop 1,950 meters away. Team sergeant called for me to bring the M107 up to the front to engage the spotter.

I dialed the correct elevation for the shot I was about to take. I was able to read the wind at ground level because of a flag placed on an Afghan grave near our location. However, I could not correctly read the wind on top of the ridge. I got into a good supported shooting position, fell into my bubble, and took the slack out of the trigger. My first shot hit low and left.

The spotter got up from his position and ran from right to left along the ridgeline to get off the mountain. I used hold offs for my correction and had to add in lead because of his movement. My second shot missed. We did not see an impact so we thought the shot went over the spotter. I hit him on my sixth shot. He was hit in the midsection. The radio chatter stopped and we continued our operation for the rest of the day. —Anonymous 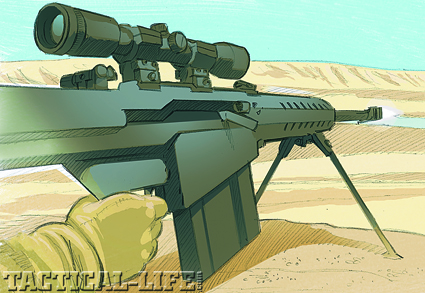 Stationed in Iraq at Forward Operating Base, Iskandaryia, Sgt. 1st Class Brandon McGuire of the 509th Parachute Infantry Regiment was tasked with tracking down insurgent teams firing mortars at both them and Iraqi civilians. During the mission, two members of his group were wounded, one critically, by an IED on a road that had been the site of numerous attacks in the past. McGuire and his team decided to stick around see if they could help out there. Setting up in a location with an excellent view of the road, after a few days McGuire and his team spotted a man along the road digging up a mortar tube. Once he had received clearance to engage, he set up with his .50-cal Model 82A1 sniper rifle. His spotter called the distance as 1,300 meters, an extremely long shot. In addition, there were high winds. All that aside, McGuire was determined to take the time and try to make this difficult shot because he knew lives were on the line.

Keeping him in his sights for more than an hour, McGuire waited until a solid shot presented itself. When he pulled the trigger, his position was engulfed in dust from the powerful shot, but his spotter had kept the target in sight when he fired and said that he had scored a hit.

Although the target was more than a mile away, McGuire had managed to pull off the shot—a feat that would become known throughout his unit as the “million-dollar shot.” 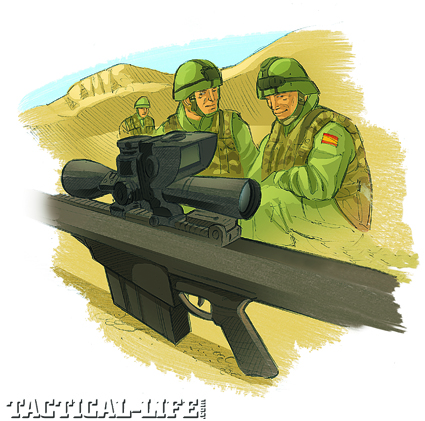 To really wring out the equipment, it was decided that a Mountain Special Forces Unit would be a good choice for the testing and evaluation process due to the fact that they often shoot at extreme angles in demanding environmental conditions.

The testing process was being run by Eduardo Abril de Fontcuberta, a sniper instructor and weapon specialist. During the testing, some of the soldiers informed Fontcuberta that they were unfamiliar with firing the rifle at the extreme distances being employed that day.

In response, Fontcuberta quickly mounted the BORS on a Model 95, did a rough zero by looking through the bore and ripped off two shots at 100 yards. He then directed them to take a shot at a car on the range at a distance of 1,350 meters. When the first round hit the rear door, the entire group loudly proclaimed their satisfaction with the Barrett rifle and the BORS.