I was working solo on the PM shift, writing an equipment violation, when I noticed a vehicle that was wanted for an ADW (assault with a deadly weapon) moving in the other direction.

The suspect had pointed a revolver at one of our police cadets over a parking violation. I ran back to my unit, whipped a U-turn and advised dispatch I was in pursuit of an ADW suspect. The suspect jumped onto the freeway and the chase was on.

Our police chopper began illuminating the suspect’s vehicle. By now CHP and LAPD had been advised of the chase. Finally, the suspect’s vehicle pulled over and stopped on the shoulder of the freeway. Before I came to a complete stop, I had already jacked a round into my shotgun.

I ordered the suspect to remain inside his vehicle with his palms pressed against the front windshield. My instincts told me he was going to try and shoot it out with me, despite the fact he had pulled over. My backup arrived and the suspect was taken into custody. On the front seat of the suspect’s vehicle was a loaded revolver.

On the way to the station the suspect said, “You know officer, if you had approached me by yourself with no shotgun, I was going to start shooting.” I replied, “Listen, you were bought and paid for the minute you pointed your gun at our cadet. If you had tried to step out of your vehicle before you were told to do so, you would have received two 00 buck rounds.”
“Even if it turned out I wasn’t armed?”
“We take care of our own here, if you get my drift.” The suspect got real quiet after the exchange. The suspect pled guilty to ADW. I guess he figured he was safer in the joint than out on the streets.

Morals of the story: Bring enough gun to the party. Assuming things can get you killed real quick. Always have a position of advantage when dealing with suspects. Never stand with your weapon facing the suspect. What’s in the suspect’s hands? You don’t know? Shame on you.
—RW, TX 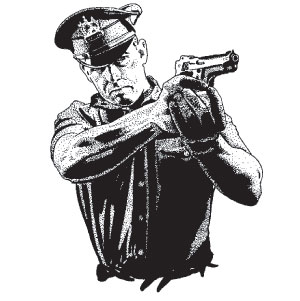 For Love, For Drugs

I was working solo on the PM shift, writing an equipment violation, when I…