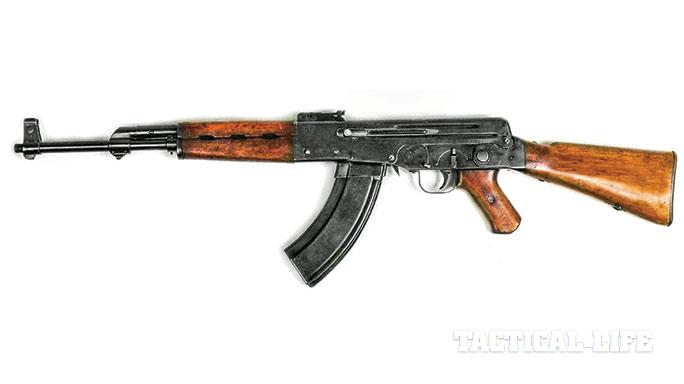 1 of 7
Birth of the AK: A History of the Avtomat Kalashnikova
Shown is the first Kalashnikov assault rifle, the AK-46. This rifle was entered into the 1946 test trials. 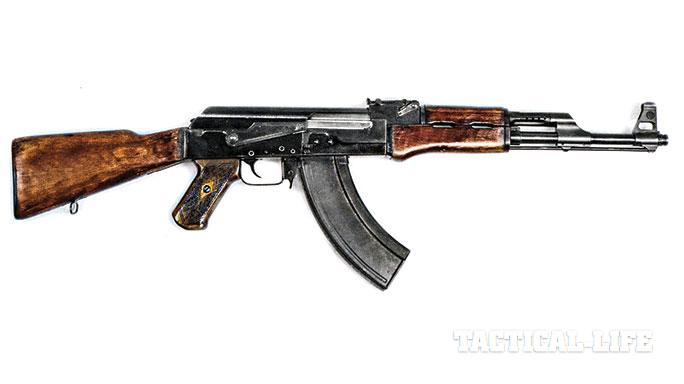 2 of 7
Birth of the AK: A History of the Avtomat Kalashnikova
A very early production AK-47, as it was adopted in 1949. 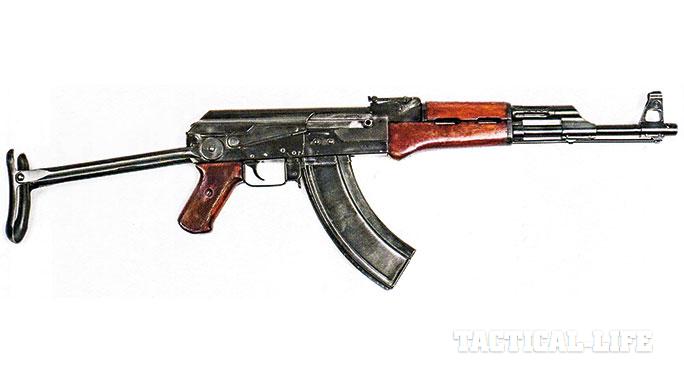 3 of 7
Birth of the AK: A History of the Avtomat Kalashnikova
Prototype AK-47 assault rifle with folding stock, 1947. 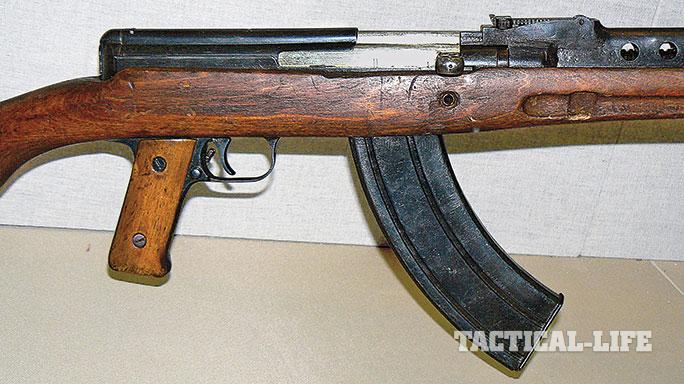 4 of 7
Birth of the AK: A History of the Avtomat Kalashnikova
Close-up view of the Tokarev experimental assault rifle of 1945. 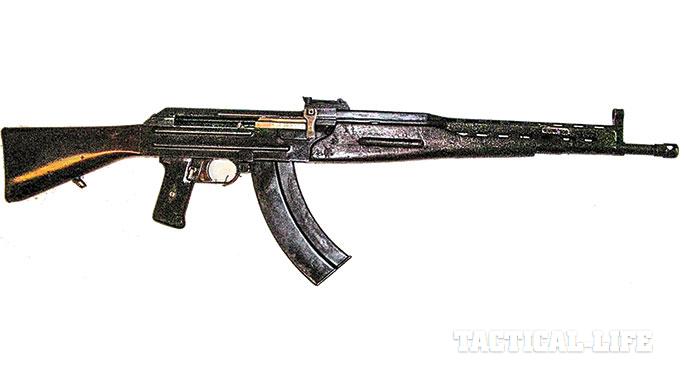 5 of 7
Birth of the AK: A History of the Avtomat Kalashnikova
Bulkin AB-46 assault rifle, which competed with the AK-47 but lost due to reliability issues. 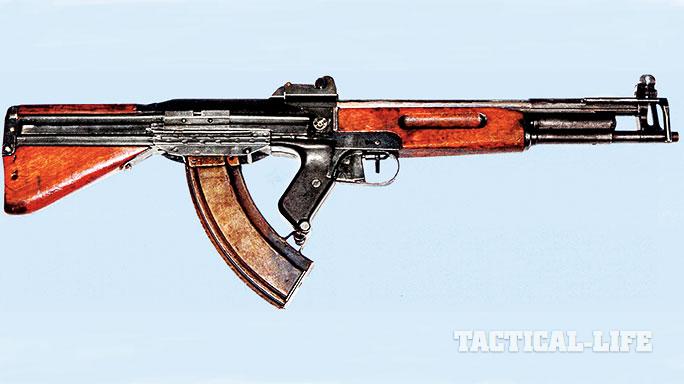 6 of 7
Birth of the AK: A History of the Avtomat Kalashnikova 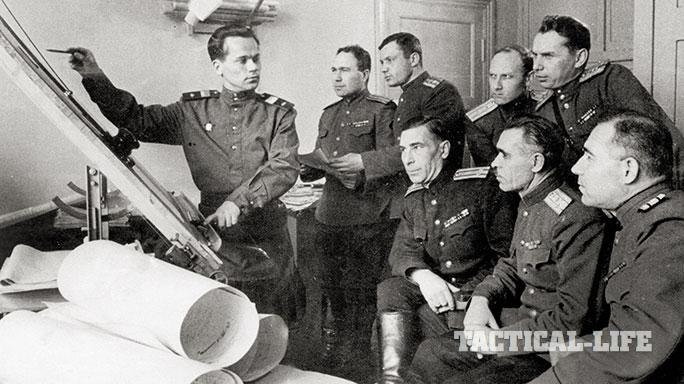 7 of 7
Birth of the AK: A History of the Avtomat Kalashnikova
Classic Soviet propaganda photo from the late 1940s, showing a young Sergeant Kalashnikov (motioning toward board) with officers of the Ministry of Armed Forces of the USSR. 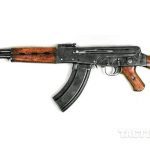 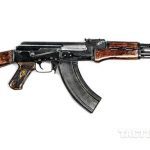 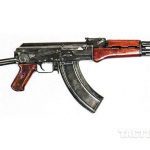 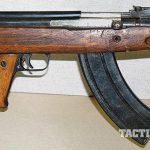 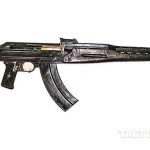 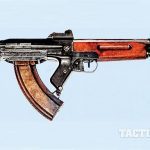 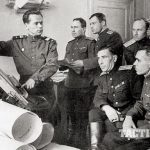 The Avtomat Kalashnikova assault rifle, generally known as the AK, was born out of the harsh experiences of World War II, in which the Soviet Union fought against invading Nazi Germany and its allies and subordinates.

By the start of the war in 1941, the Soviet Army was armed with bolt-action 1891/30 Mosin-Nagant rifles, which were gradually replaced by semi-automatic Tokarev SVT-40 rifles that fired the same 7.62x54R ammunition. This ammunition was more or less equal in terms of power and range with other contemporary rifle cartridges, such as the British .303, the U.S. .30-06 or the German 7.92x57mm. Also, as a result of recent experiences of the Winter War, fought from 1939 through 1940 against Finland, submachine guns were hastily introduced as secondary armaments for Soviet infantry forces. These submachine guns, the Degtyaryov PPD-40 and the subsequent Shpagin PPSh41, fired 7.62x25mm ammunition, which was light and cheap but also had a limited effective range (about 200 to 250 meters).

Neither class of weapons was entirely satisfactory. Bolt-action rifles, while extremely robust and cheap to make, were slow-firing, excessively long and badly suited for urban or forest warfare, as well as for mechanized transport. Semi-automatic rifles offered noticeable improvements in firepower, but they also were expensive, required regular maintenance and were generally picky about the quality of ammunition. Submachine guns, while handy and inexpensive, lacked accuracy and penetration. It was clear that some kind of new weapon was required if not to finish the ongoing war, then to arm the Soviet Army to guard the fruits of its inevitable victory.

The actual story of the Soviet assault rifle began in 1942, during the hardest part of WWII. Two events took place during that year. First, a young, wounded tanker, Sergeant Mikhail Kalashnikov, began to design his first small arm (a submachine gun) while on medical leave. Second, during the winter of 1942, the Soviet Army captured the first specimen of the newest German weapon, the machine carbine Mkb.42 (H) and its 7.92x33mm Kurz ammunition. These trophies were carefully examined, and proved to Soviet experts that it was entirely possible to improve both the range and accuracy of shoulder-fired automatic weapons while retaining the weight and size of the typical PPSh41 submachine gun. The Soviet Army immediately requested the development of an intermediate cartridge in 7.62mm caliber, leading designers Semin and Elizarov to develop such ammunition by the end of 1943. It had a bottlenecked case that was 41mm long and fired a pointed, jacketed bullet weighing 8 grams (the case was shortened to 39mm in 1947, with the introduction of the steel-cored, boattailed bullet).

With the new cartridge handy, Soviet designers began to work on automatic rifles. First was Sudayev (designer of the highly successful PPS43 submachine gun), who developed his first assault rifle, known as the AS-44, by early 1944. This was a gas-operated, locked-breech design with a tilting locking bolt that was submitted for trials by mid-1944. The Army then ordered a small batch of AS-44 rifles with an appropriate amount of ammunition for extended field trials, and received it in 1945. Unfortunately, Sudayev’s severe illness and untimely death in mid-1946 (he was just 33 when died) terminated the development of the AS-44.

The first round of trials, held in 1945, consisted of several designs by noted designers such as Sudayev, Tokarev and Shpagin, as well as some designs from less famous men like Prilutsky or Bulkin. Some designs were based on previous works of its authors. For example, Tokarev assault rifles, which were based on their namesake’s self-loading rifle, were scaled down for a smaller cartridge and adapted to selective fire. Another “legacy” design was the Shpagin assault rifle, which, most surprisingly, was more or less a PPSh41 submachine gun stretched out for 7.62x41mm (M43) ammunition. It used the same open bolt and a simple blowback action with a heavy bolt weighing over 2.6 pounds.

Not surprisingly, the Shpagin rifle was a complete failure. Other designs were more novel, such as a gas-operated bullpup rifle from Prilutsky, which used a gas-operated action with a tilting locking bolt. Neither weapon performed satisfactorily, however. As a result, the next round of trials was scheduled for 1946.

Among the entrants to the 1946 test trials was the first Kalashnikov assault rifle, generally known as the AK-46. It was a gas-operated, select-fire weapon with a locking rotary bolt inspired by the M1 Garand rifle. The AK-46 featured a short-stroke gas piston above the barrel, a two-piece machined steel receiver and separate manual safety and fire selector levers. AK-46 prototypes were assembled at the Kovrov factory N.2, currently known as ZID or the “Degtyaryov plant.”

Other contenders that were permitted to participate in the 1946 trials included the AR-46 rifle by Rukavishnikov, the TKB-408 rifle by Korobov, the AB-46 rifle by Bulkin and the AD-46 rifle by Dementiev. By far the most unorthodox was the TKB-408, which was built in a compact bullpup layout. The trial’s results were inconclusive: No weapon was able to perform satisfactorily in all tests, and two designs were initially suggested for further development: Bulkin’s and Dementiev’s.

Despite the initial failure, Kalashnikov was able to talk certain members of the trials commission into reevaluating their test results, and the commission eventually allowed him to continue his development for the next round of trials.

With official approval for further development, Kalashnikov returned to Kovrov and commenced an extensive redesign process. With the help of experienced small arms designer Aelksandr Zaytsev, he change the receiver design, replaced the short-stroke, separate gas piston with the now familiar long-stroke piston integral with bolt carrier, and he also replaced the separate safety switch and fire selector with a single lever, inspired by the Browning-
designed Remington Model 8 rifle.

In pursuit of meeting weight requirements, Kalashnikov also dared to cut the barrel shorter that it was originally required, to 16.3 inches, from the specified 20-inch requirement. This was a serious violation of the formal written requirements, but apparently the actual loss of muzzle velocity was negligible. The benefits of the shorter barrel included better handling and a slight decrease in manufacturing costs, so the trials commission let it slip in the end.

It must be noted that some “new” features of the 1947 Kalashnikov prototype were borrowed from competing designs, or ones that were suggested by Proving Ground personnel. This was common practice in the Soviet Union, where all intellectual property belonged to “the people,” or, actually, to the state, rather than to the inventor. Therefore, all inventions were free to use by everyone as long as they were put to the benefit of the state, and the development of a new infantry rifle was obviously considered quite beneficial to the homeland.

During the trials, none of designs performed entirely up to military requirements, with the Bulkin design proving most accurate and Kalashnikov being the most rugged and reliable. After lengthy discussion, the trials commission decided that a reliable weapon with “passable” accuracy, available right now, was better than a reliable and accurate rifle available next year, or next decade, and decided to recommend the AK-47 for trial batch production, with suggestions for further improvements. The trials commission issued a final document on January 10th, 1948, stating that the Kalashnikov design was recommended for limited manufacture and field trials, and that its two rivals had failed the trials.

It must be noted that the designation “AK-47” was officially used only during trials and first one or two years of limited production. Since around 1950 rifle was designated simply as an AK.

The next step was to make a batch of rifles for these field trials. Despite the fact that early AK prototypes were made at Plant #2 in the city of Kovrov, near Moscow, another plant was allocated for batch manufacture. It was plant #524, located deep in the heart of Russia (and far from watchful eyes of foreign intelligence services), in the city of Izhevsk.

By June of 1947, the initial batch of AK rifles was delivered to the Soviet Army, and distributed to several different units located throughout the Soviet Union, primarily around Moscow and Leningrad and in central Asia. As a result of extensive field trials conducted in a variety of climates and tactical scenarios, the AK was officially approved as a new standard arm for the Soviet Army in 1949.

Mass manufacture of the AK was ordered to plant #74, which is known today as “Izhevsk Machine-building plant” or “Izhmash” in short. As it turned out, existing machinery and technologies of the plant were not sufficient to manufacture new weapons with the necessary quality and precision. During the first two years of AK production, the amount of rejected rifles was too excessive, and by late 1950, it became obvious that a major redesign was required to improve production quality and output.

A group of factory engineers had to develop a machined steel receiver instead of the original stamped steel receiver. This step was technologically backward, but in reality it greatly reduced the amount of receivers that were being rejected at the factory. Machined receiver AK and AKS designs, which entered production in 1951, retained the same designations as the original, stamped steel AK and AKS models of 1949. These would become the first mass-produced versions of the now famous Kalashnikov AK assault rifles, which were produced until the late 1950s in the Soviet Union and are still made elsewhere in the world today. 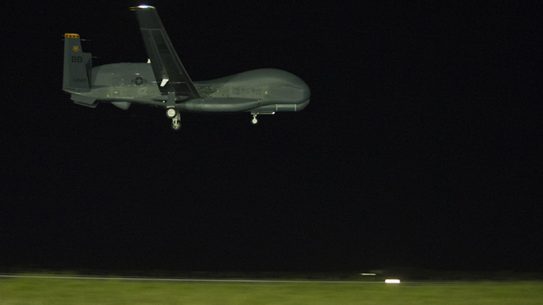