0
SHARES
0
VIEWS
Share on FacebookShare on Twitter
The Bushido PDW is made for unobtrusive but effective personal protection for tactical medics, covert security details and even situations in open or urban terrain.

The theme was constant; “Stay In The Fight” as this writer and 15 students including EMT’s, physicians, a firefighter, and other professionals spent two days learning carbine gunfighting from Wade Rorich at Bushido Tactical’s Carbine Course. It was sponsored by East Orange Shooting Sports, LE Targets and Brownells and hosted by the Central Florida Rifle & Pistol Club. During the course I used the new Bushido 9mm PDW and was surprised at the ability to make consistent first-round hits from all distances and positions. Wade is the President of Bushido Tactical, LLC and chief instructor, as well as the developer of the Bushido PDW. He demanded constant weapon control from the students and made it clear that proper muzzle orientation was a cornerstone for the course; be safe or go home. That message was important because this was not a class where students sit for hours while the instructor drones on and on. It was moving, kneeling, jumping in the dirt, swapping shoulders, running, jumping in the dirt again and running again—all while ensuring that the muzzle was maintained downrange and on target.

The course exercised every muscle in the body, while wringing out every aspect of the gear the students used. We quickly found out what was best for us:

• Does my ammo carrier allow easy and consistent access? (No, I can’t easily reach my magazines when shooting opposite-shoulder.)
• Does my two-point sling become a hindrance while I am engaging a threat? (Sometimes, when I need to rapidly switch shoulders.)
• Do the new doo-dads I just put on my carbine really make my shooting better? (No, they just add weight.)
• Does my eyewear give a clear view of my targets during exertion? (No, they fog up in the heat, but an application of Clarity DEFOG-it cleared it up.)
• When engaging targets with my off hand, do I make myself vulnerable by shooting from a left-hand barricade using my right shoulder? (Yes, rapidly swapping shoulders to engage a left-side threat is better and exposes less to return fire.)
• Is my red dot sight co-witnessed with my iron sights? (Yes, after sighting in.)
• Is it embarrassing to shoot in front of strangers? (Only to start with and then you realize that they are as self-conscious as you are and by the afternoon they are good friends anyway!) 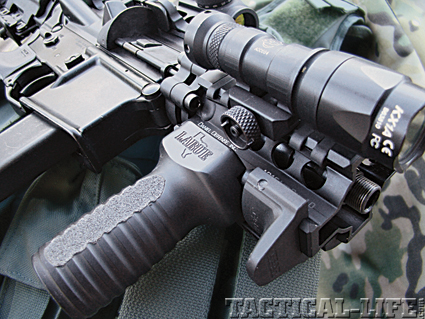 Running The Gun
Those questions, and many others I never knew I had, were answered not by discussion but by doing, and I did it with Wade’s new 9mm 5-inch barrel PDW. The Bushido PDW is a short-barreled blow-black operated sub-gun that is amazingly accurate with or without its easily installed suppressor. The universal 9x19mm is a world-wide standard that can be found anywhere and depending on the load can challenge most body armor. The lightness of the weapon was evident later in the day when other shooters were letting their heavier weapons droop while the PDW was easy to keep on target.