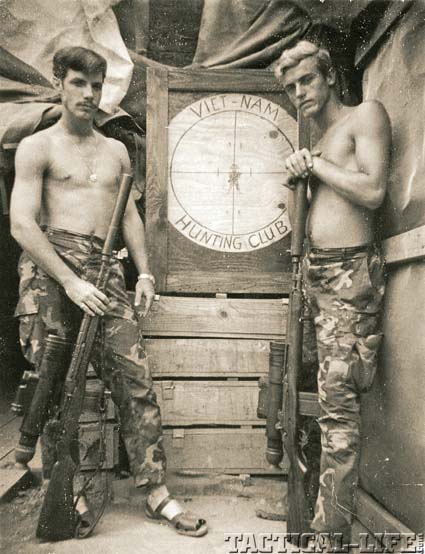 Hathcock was a leading influence in establishing a USMC sniper cadre in Vietnam. Here two snipers pose with their accurized M14 rifles with early Starlight scopes and Sionics silencers.

Because of his service record of 93 confirmed kills of NVA and VC, and the extraordinary nature of his missions, Hathcock is probably the best-known American sniper. He is ranked fourth among American snipers, from an era where a kill had to be confirmed by an acting third party, an officer, besides the spotter. Snipers seldom had an acting third party present, especially when the target was behind enemy lines—a common venue for Hathcock. A legend in the Corps, Hathcock’s reputation as a sniper and his dedication to long-distance shooting led him to become a major developer of the USMC sniper training program.

Before deploying to Vietnam Hathcock had won various shooting championships, but his 1966 deployment was as an MP, later becoming a sniper when the Marines raised dedicated snipers in every platoon. Hathcock generally used the standard Model 70 Winchester .30-06 with an 8X Unertl scope. He also used a Browning M2 .50 machine gun, on which he mounted a 10X Unertl scope. His record for the longest confirmed kill at 2,286 yards with this weapon stood until 2002.

Hathcock once said that he survived because of an ability to “get in the bubble,” to put himself into a state of “utter, complete, absolute concentration,” with his equipment, his environment, and his quarry. “I like shooting, and I love hunting. But I never did enjoy killing anybody. It’s my job. If I don’t get those bastards, then they’re gonna kill a lot of these kids dressed up like Marines,” he said.

The NVA put a bounty of $30,000 on Hathcock, a princely sum. The VC and NVA called Hathcock Lông Trăng (White Feather), after the white feather he wore in his hat band. After a platoon of trained Vietnamese snipers was sent to hunt down “White Feather,” many Marines in the same area donned white feathers to deceive the enemy, to protect their protector. 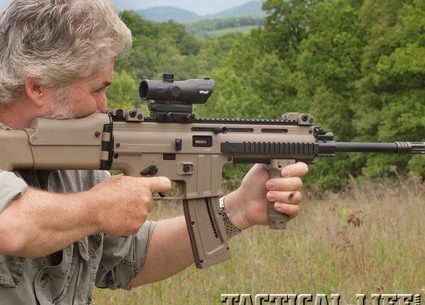 Hathcock was a leading influence in establishing a USMC sniper cadre in Vietnam. Here…