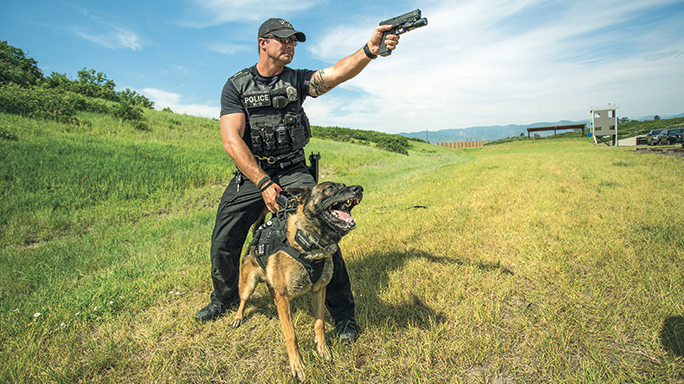 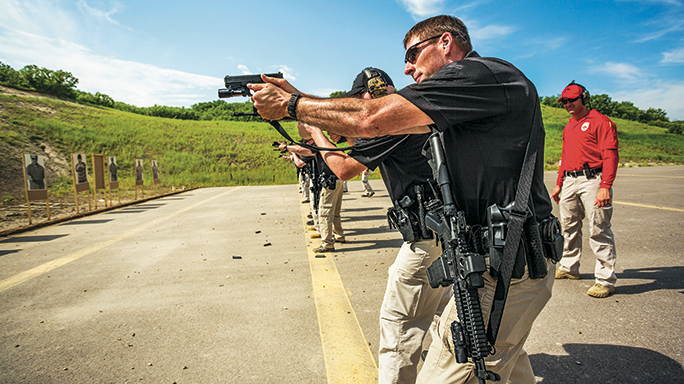 2 of 3
Photo by DAN HENDERSON
Protecting the Castle: Castle Rock PD and Its 9×19 Glocks
CRPD officers take to the range with their new 9×19 GLOCKs. An officer is shown here transitioning to his GLOCK from his patrol rifle. 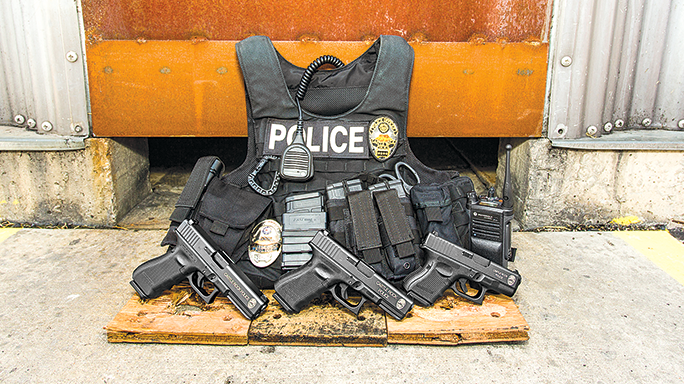 3 of 3
Photo by DAN HENDERSON
Protecting the Castle: Castle Rock PD and Its 9×19 Glocks
“The goal was to select a reliable pistol that could be used effectively by personnel with … different hand sizes and while wearing uniforms, SWAT gear or street clothes.” 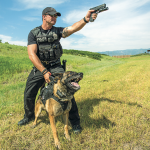 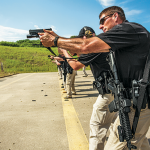 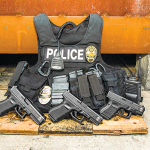 Castle Rock, Colo., is located on the Front Range of the Rockies, just south of Denver, the state’s capital. It is a pleasant, family-friendly community that is constantly ranked as one of the best and safest places to live. While many communities experience acts of violence, Castle Rock chose to learn from one incident that was certainly not a normal occurrence for this peaceful town.

That peace was shattered on July 4, 2012, when a man armed with an AK-47 fired at least 80 rounds at Castle Rock police officers. Thankfully, no one was killed. At that time, the department’s firearms policy allowed officers the option to carry the department’s standard-issue handguns or purchase their own GLOCK or 1911 pistols for duty use. This resulted in a mix of various pistols in different calibers and caused some headaches for armorers. In addition, long arms carried in police vehicles were still mostly shotguns. The incident prompted a complete revision of the department’s policy on issued firearms.

Newly arrived Police Chief Jack Cauley standardized the department’s sidearms, focusing on one pistol and supplying each police officer with their duty pistol as well as an AR-15 patrol rifle. The shotguns came out of the patrol vehicles and were retasked for use only with less-lethal ammunition. This change in departmental policy simplified the armorer’s maintenance tasks and also provided spare duty weapons for officers whose pistol may be secured for evidence or repair.

The Castle Rock Police Department (CRPD) embarked on an exhaustive search to find a single pistol and caliber that could satisfy all the duty requirements of patrol and detective personnel as well as its SWAT operators, since the department contributes officers to the Douglas County Regional SWAT team.

The goal was to select a reliable pistol that could be used effectively by personnel with varying degrees of experience, different hand sizes and while wearing uniforms, SWAT gear or street clothes. Research included obtaining data from other agencies, including Colorado’s Aurora Police Department and the Los Angeles Police Department.

Over five separate range sessions, all department personnel—from the chief down—shot 18 different pistols from several manufacturers of varying makes and models, and in three different calibers. Older designs such as the 1911, double-action/single-action pistols and those with decocking levers were not included. The selected pistol also had to be rugged enough to operate in Colorado’s extreme variations in weather. At each session, each officer filled out a survey on the pistols and calibers they shot. Even some of the Castle Rock city council members took part in the evaluation.

A separate phase of the evaluation was to decide on one caliber—either 9×19, .40 or .45 AUTO—for the entire department. Many of the officers already had their personal preferences based on carrying other duty guns. A few voiced concerns about the lack of effectiveness of the 9×19 cartridge in U.S. military service in the Gulf War and other military conflicts. Once they understood that soldiers are bound by international convention to only use full-metal-jacket (FMJ) ammunition, but U.S. law enforcement and civilians are able to carry far more effective hollow-point rounds, the 9×19 cartridge was the popular choice, based on effectiveness and increased magazine capacity. At the end of the range testing, the results showed that the GLOCK 17 Gen4 was the clear favorite among the officers.

Evaluations of various duty holsters and weapon-mounted lights followed. The final package for each uniformed officer consisted of the G17 Gen4 with night sights, a polymer duty holster and a tactical light. In addition to the G17 Gen4, the department selected the G19 Gen4 with night sights for its detectives. GLOCK provided the department with an armorer parts kit and GLOCK Armorer training.

Range training included eight hours of various shooting drills that culminated in the successful completion of the department qualification course. With some support from GLOCK, the department even ran a shooting match in order to give the officers another opportunity to familiarize themselves with their new pistols in a more competitive, faster-paced environment. Ongoing training is the lifeblood of a good department’s firearms program. Castle Rock recognizes this and also purchased some G17T blue training pistols. The guns are identical in operation to the standard G17 Gen4 duty pistols but are designed to fire color-marking cartridges and cannot chamber or fire conventional ammunition. The blue pistols are used in force-on-force exercises to develop tactical skills and procedures.

The new GLOCKs have enhanced the pride that the officers at Castle Rock have in their department. To recognize this, there was one final requirement proposed by Chief Cauley that all the GLOCK duty pistols would be engraved with “Castle Rock PD” and the department’s badge on the slide. In addition, any privately purchased G26 guns would also be engraved if the owner wished.

Castle Rock has been highly satisfied with its GLOCK pistols throughout its transition. By mid-December 2014, the department’s GLOCK pistol transition was complete. The results so far indicate that the department made some exceptional choices not only in the pistols and other equipment, but also in the way the selection process was structured, the rollout of the new pistols and the initial and ongoing training and qualification procedures. 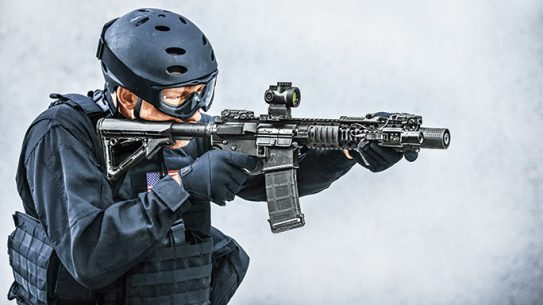 Red-dot sights for fast targeting in any environment.