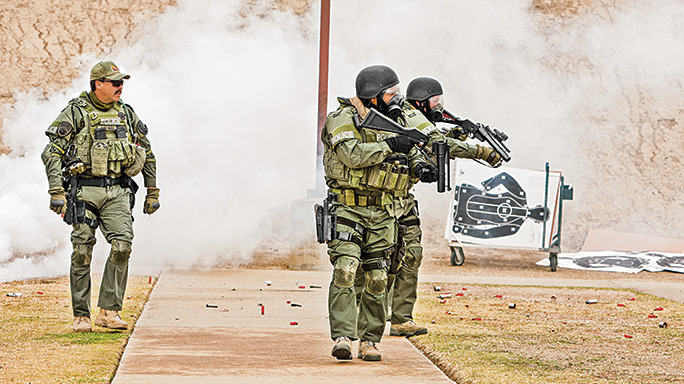 1 of 5
Photo by Ichiro Nagata
Training Day with CDCR Crisis Response Teams at Pleasant Valley State Prison
During the CRT training day, operators hit the range with most of their inventory—even their 40mm grenade launchers. 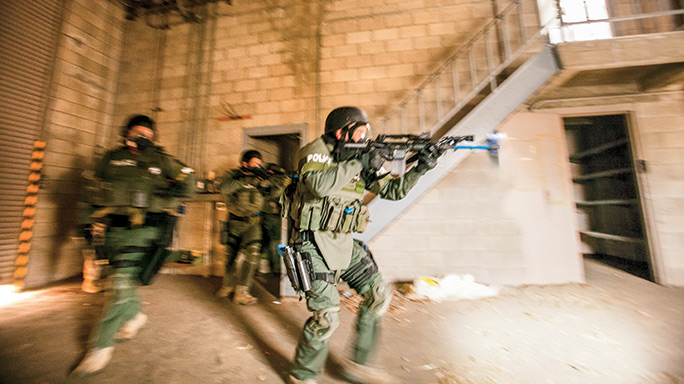 2 of 5
Photo by Ichiro Nagata
Training Day with CDCR Crisis Response Teams at Pleasant Valley State Prison
“Our forte is rescuing hostages. That’s what we do. That’s why it is so critical that our guys are surgical shooters.” 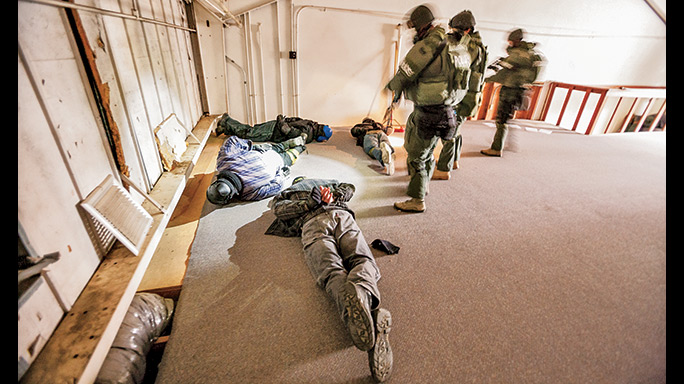 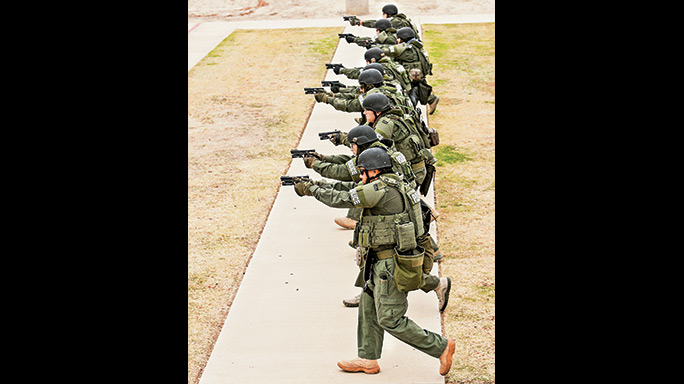 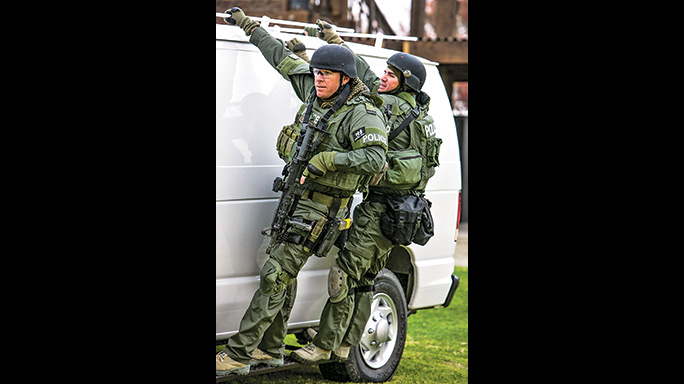 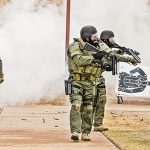 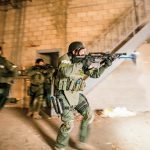 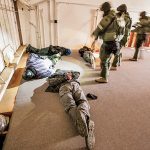 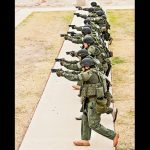 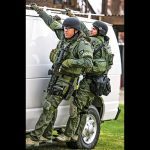 The California Department of Corrections and Rehabilitation (CDCR) Crisis Response Teams (CRTs) are the state “Prison SWAT,” and they take on some of the most violent offenders in and out of the California prison system.

Their motto, Toujours Pret, French for “Always Ready,” and Salver Vita, Latin for “To Save Lives,” sum up their past, present and future roles as the CDCR’s tactical units.

One early fall morning, I followed CDCR Sergeant Greg Estrada, a CRT squad leader, onto the grounds of the Pleasant Valley State Prison for a day of tactical training and qualification with his CRT. My first thought upon entering the prison grounds was that “Pleasant Valley State Prison” was one hell of an oxymoron. I must admit that there was something about the sun rising against the backdrop of a guard tower and knowing that there were thousands of California’s hardest criminals inside that made me even more eager for the day to follow. I had first met Sgt. Estrada in an advanced pistol class that we were both participating in along with CDCR Sgt. Vince Lozano. I was very impressed that these guys were not only truly fast, but they were also unquestionably accurate. “Surgical precision” is the best way to describe their shooting.

While CRT operators are correctional officers, they are also warriors at heart. As we walked into the Pleasant Valley State Prison “Ready Room” located between the armory and the range for the CRT training briefing, the first thing one notices on the wall is a sign with a few words:

“Why warriors are needed: For every predator who has been righteously deprived of his freedom for the crimes he has committed, there are now all of his potential victims who have the freedom to live their lives without becoming his prey. The average citizen does not think about this much and rarely appreciates or understands this gift that law enforcement gives him.”

As I read the sign, a long-time marksman for the team introduced himself. He said, “You want another quote?” I said, “Sure.” He looked me dead in the eyes and said, “The good people of this country sleep peacefully in their beds because rough men stand ready to do violence on their behalf … nice to meet you.” He then smiled and we shook hands. Strike Team Leader Lt. Larry Ybarra called the daily briefing to order:

“Good morning everyone. Listen up. At 06:00, everyone in formation with full alpha gear [CMARS 47TA]. The daily training assignment consists of vehicle assault scenarios focusing on hostage rescues from 06:30 to 08:30. PTMs [potential team members] will serve as hotel/tangos [hostages/targets]. Strike team responsibilities and instructor assignments will be given out prior to each scenario. Aguirre, Davis and Guerrero are instructors today.”

It should be noted that this was Davis’ first training assignment since returning from Afghanistan.

Ybarra continued, “From 08:45 until 09:45, all team members will qualify with their ARs, Glocks and Remington 870s. 10:00, snipers at 100 yards from the elevated platform on target, one-shot, cold pipe. TFI: Estrada and Jensen on the platform, Rue on the ground. After sniper qualification, hostage rescue from the mobile assault vehicle with sniper coverage, incorporating the drag dummy as our downed Hotel. During this time, 11:00-11:30: MP5 operators will qualify from CQB (3 to 10 yards) at the pistol range. 11:30 to 12:30: Lunch. After lunch, from 12:45-14:45, we have a new weaponless defense/edged-weapon tactics class that you folks haven’t seen before conducted by our guest instructor, Mr. Ichiro Nagata. From 15:00-16:00: Range and weapons cleanup. Any questions? We good to go? Roger that. Fall out and form up!”

As the team members grabbed their “go bags” and headed out the door, I saw another sign on the wall: “When warriors train, they always imagine using those skills in combat to ensure that they win the confrontation while others simply go through the motions. At the firing range, others simply see a paper target to which they need to get a certain number of holes to qualify. Warriors, however, imagine that someone is attempting to kill them … attempting to take them away from their family. Warriors prepare to succeed in armed combat while others simply prepare to qualify.”

Training went well that drizzly November morning. Scenarios were run over and over again with different configurations, diverse tactics and new objectives. The point men, hands men, rear guard and squad leader all rotated positions and responsibilities. The men conducted vehicle assaults on foot and from their mobile assault van, rescued hostages, apprehended suspects and learned new skills while polishing old techniques. Every operator, highly trained as an individual, worked flawlessly in unison with other team members, each training scenario choreographed and performed with the skills one could only obtain from hours and hours of training. Hand signals, commands in code, looks, a glance, a head nod—they were all smooth, deliberate, precise and effective.

After lunch I spoke with outgoing team leader Tony Sylva:

TW: Tony, how long have you been with the CDCR?

TS: I’ve been with the department for going on 27 years. I started my career as a correctional officer, then was promoted to sergeant, counselor, lieutenant and then what I’m doing now, which is CC1 [Correctional Counselor 1], but I have been on the CRT team the entire time. There has never been a break from my time with the CRT team, so I have worked my way up from the bottom.

TW: What’s the biggest change you’ve seen in regards to tactics within the department in the last 27 years?

TS:  As an organization, the CDCR has evolved a great deal, especially in the past 10 to 15 years. Initially we had our own program doing what we thought worked. Now we are training and learning with the rest of the tactical community at a state-of-the-art level within the industry. We’re out there learning what everyone else is doing, finding out what works and implementing and making it a part of our teams. That makes us better operators, and we’re able to seamlessly work together with other teams, not only within the CDCR but other agencies. We all “speak the same language” and know the same techniques so that when we get into situations where we may have to work interagency, we are on the same page. Our ability to actually capture the tactical aspect and effectively apply it to our needs within the department is a big plus for us.

TW: What do you do better than other teams?

TS: Definitely hostage rescues. Our forte is rescuing hostages. That’s what we do. That’s why it is so critical that our guys are surgical shooters. Initially that was our bread and butter and all we were called out to do. But now we’re starting to do more executive protection, search warrants and high-risk arrests, stuff like that.

TW: What do you mean by “executive protection”?

TS: Bottom line: Whomever we’re called upon to protect from whatever possible, potential threat. It could be elected officials or departmental officials. It could be our own employees from this facility. If one of our employees is identified as having a credible threat against them or their family, we’ll be tasked with providing protection for them and/or their family, which I’ve had to do more than once. There are bad people out there.

TW: What are the greatest training improvements the department has made over the years?

TS: I’d say our biggest improvement is in the operator certification courses. When I first started years ago, it was a 10-day academy, and it was probably between 140 to 150 hours long. Back then, when you first got to the academy, it was all about getting you into physical condition and seeing how much you could take. There was some shooting with minimum qualifications. Now we’ve evolved from the CRT Basic Academy to having CRT Operator 1, Operator 2 and Operator 3 certification courses. The roles are very, very defined in each of those individual academies, unlike the earlier academies where the goal was physical conditioning and basic qualifications.

Now, the Operator 1 is still a basic entry-level academy that is 10 days/150 hours long, and upon completion the individual has about a year or so of training before they are eligible to attend the Operator 2 academy and then another 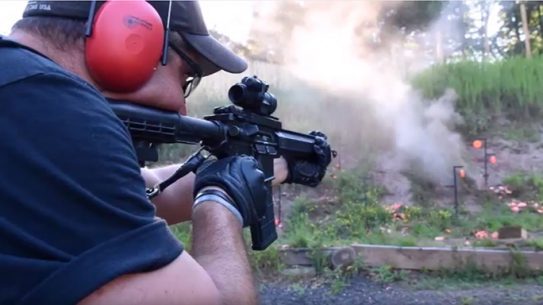 The new Drive Drill from Jersey Tactical will help you take down multiple targets...