1 of 2
Spec Ops Speedboat: CMN’s RWS 30 Interceptor
An RWS 30 armed patrol craft runs at high speed off the French coast. Its carbon-fiber hull and high-speed engines allow it to travel at over 50 knots—faster than most threats on the high seas.

For decades, smugglers have ferried drugs, illegal immigrants and contraband into the U.S. and other nations with lightning-fast watercraft designed for offshore powerboat racing. Known as “cigarette boats” or “go-fasts,” these vessels can easily outrun Coast Guard cutters or similarly sized small patrol ships. Helicopters armed with machine guns or .50-caliber rifles capable of blasting engines apart have become a standard smuggling countermeasure in the U.S., but there are more boats than rotorcraft to catch them.

By the same token, special operations forces have long relied on small, fast craft to conduct amphibious operations in brown water and for clandestine entries and exits from coastal areas. Go-fasts are unlikely candidates for special operators because they offer little more than speed on the water. They are not configured for military missions and carry no armor, integral defensive weapons or detection and jamming systems to alert to and neutralize radar or infrared signals that control attacks. Consequently, many small military units that train for and conduct amphibious operations use rigid inflatable boats (RIBs). Most RIBs utilize buoyant inflatable collars surrounding hydroplaning hulls that enable them to skim the water’s surface at high speed with powerful outboard motors or inboard water jets. Typical RIBs are 15 to 30 feet long, but some are up to 55 feet in length with wheelhouses or cabins. Still, RIBs are vulnerable to attack and at best provide pintle mounts for machine guns for defense.

The options for military and law enforcement maritime operators are increasing, however, thanks to a newly developed boat designed specifically for high-risk missions that too frequently involve gunfire. Constructions Mécaniques de Normandie (CMN), a small, privately held shipyard in Cherbourg, France, has been fabricating and refitting wooden, aluminum, steel and composite naval vessels and luxury motor yachts up to 262.5 feet long since 1945. CMN conducts all of its maritime construction inside its large manufacturing facilities, which encompass more than half a million square feet. It launches craft with smaller displacements (less than 700 tons) by slipway and hulls displacing up to 3,000 tons on a synchrolift, a large submersible elevator.

The company produces three categories or “families” of naval vessels: Combatante, configured with heavy combat systems with hull lengths ranging from 137.8 to 262.5 feet; Vigilante, with lighter armament in the same hull sizes for operations other than war, including presence missions, patrol and surveillance; and Interceptor, which are high-speed craft between 49 and 108 feet long designed for interception missions.

The Interceptor/DV15 category is most applicable to coastal patrol and special operations. The latest entrant in the family is the DV15/RWS 30, which is derived from models already in service in several nations in the Persian Gulf and Arabian Sea, including the United Arab Emirates, Qatar and Yemen.

The RWS 30 takes the Interceptor’s capabilities well beyond conventional performance levels—it’s a patrol craft on steroids. It is built with a one-piece, carbon-fiber composite hull about 53.5 feet long. It’s large enough for a crew of three or four as well as passengers if necessary. Composite construction enables the RWS 30 to absorb sizable ballistic hits without breaking apart. Unlike metal, composite material is comprised of thousands of randomly arrayed short fibers that, when broken on impact, won’t propagate damage and compromise the vessel’s structural integrity. This natural ballistic protection enables CMN to avoid cumbersome armor, keeping the RWS 30 relatively light in weight, displacing less than 15 tons afloat, including two MAN R6-800 marine diesel engines rated at 800 horsepower each.

Low displacement, coupled with the craft’s surface-piercing propeller propulsion system, enables the RWS 30 to reach speeds in excess of 50 knots (57.5 mph). A surface-piercing propeller operates half in and half out of the water in the wake of water immediately aft the stern. The propeller extends from a horizontal shaft in the boat’s transom rather than an inclined shaft, with 12 to 18 degrees of tilt, placed under the hull, the typical inboard motor layout. Conventional propulsion creates a surprisingly inefficient angle of attack that directs significant energy downward and actually limits thrust and top speed. Traveling at 40 knots (51.7 mph), faster than most go-fasts in the calmest seas, the RWS 30 can travel 350 nautical miles unrefueled, making it a formidable platform for interdiction and special operations missions.

The craft also has plenty of bite. A BAE Systems/Bofors gyro-stabilized LEMUR turret system weighing nearly 750 pounds that contains an automatic, remotely operated ATK M230LF 30mm cannon is mounted above the RWS 30’s cabin with a firing azimuth of nearly 360 degrees. The M230LF is an adaptation of the chin-mounted chain gun on the AH-64D Apache Longbow attack helicopter. It fires linked ammunition at rates up to 200 rounds per minute. Three 110-round ammo canisters enable crewmembers to obliterate a wide variety of targets. A single 30mm high-explosive incendiary round will blow a truck cab apart, and a depleted-uranium, armor-piercing projectile will punch through thick steel armor plates. The turret incorporates a sophisticated sensor package with both daylight and infrared cameras and a laser rangefinder with a ballistic and tracking module fully integrated with the craft’s navigation system. The system’s computer provides target designation and fire control, enabling the cannon to lay down aimed fire while the RWS 30 is moving at full speed through swells that normally play havoc with accuracy and cause structural shocks with up to seven Gs of force.

The cabin itself is equipped with a Thales PRG4 VHF Tactical Communication System integrated with a Raymarine Navigation Suite. Sensor and electronic options include a FLIR SeaFlir 230 Electro-Optical System, satellite communication and a command and control system.

According to Guillaume Dandrieux, CMN marketing and sales manager, development of the RWS 30 follows the growing requirement for an exceptionally capable combat craft to tackle smugglers and the increasingly virulent threat of piracy in littoral waters, especially around the Horn of Africa. “The speed, range and lethality of the RWS 30 is more than a match for smugglers who are rarely heavily armed and even against pirates equipped with automatic weapons and RPGs,” he said. “The ATK gun can quickly neutralize the threats posed by maritime gangs.”

The RWS 30 is a major advance on the DV15 currently in service. That platform carries .50-caliber machine guns—formidable weapons, of course, but far less capable than the ATK chain gun. The design also incorporates operational capabilities more amenable to military missions than previous variants.

“It is important to emphasize that the RWS 30 is the product of private development,” Dandrieux added. “We funded the new vessel completely with shareholder equity and benefitted to a tremendous extent from very productive partnerships and collaborations with our excellent suppliers, BAE, Bofors, Thales, FLIR Systems and others, who provided the systems we have integrated into the craft.”

Dandrieux will not discuss prospective sales. No one has initiated operation with the RWS 30, but given the platform’s versatility, applications are highly likely, and soon. One likely candidate is U.S. Special Operations Command (USSOCOM), more specifically, units such as SEAL Team Six, which have the luxury of acquiring just about any equipment deemed necessary for successful mission completion. The RWS 30 would provide SEALs and other special operators with unprecedented capability to conduct clandestine amphibious missions, entering and exiting assault points at remarkably high speeds. Although law enforcement agencies may not require the overwhelming firepower of a 30mm automatic chain gun, they clearly could utilize the craft’s speed and maneuverability to excellent effect for a variety of law enforcement missions ranging from customs inspections and ship examinations to harbor security.

“CMN’s full line of naval vessels is exceptionally capable, made more so by the addition of the DV15/RWS 30 to our product list,” concluded Dandrieux. “We expect the performance of this craft to give operators enormous advantages for maritime missions covering the entire gamut from combat to peace-keeping and security.” 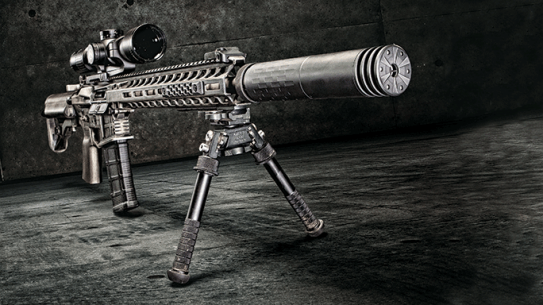