I was working in a violent offenders task force in May of 1999 when two armed men walked into a bank in the southeast part of town wearing full body armor and black ski masks. They confronted two armored car drivers making a cash drop off. After robbing them, one of the suspects arbitrarily shot one of the guards in the chest and they made off with over $400,000 in cash.

Weeks went by without a lead until we received a tip from a stripper who claimed she was dating a person who was bragging about all the cash he and a buddy had just scored during a heist. The stripper told us that she hadn’t believed him at first, so in typical dumb crook fashion, he displayed a large duffel bag to her showing off the prize.

We immediately began routine surveillance to gather probable cause for a search warrant. After the warrant was signed, we executed it, recovering over $60,000. The serial numbers matched. During the interview, the subject gave a full confession claiming he was not the shooter and identified the secondary suspect. The second suspect had a very limited criminal history, however, and it was later determined through other sources that the suspect was a military-type wannabe, an unemployed welder with a penchant for firearms.

We immediately set up surveillance on his place of residence and after a long night of surveillance, we spotted him getting dropped off in front of his house. As soon as we moved in for the arrest, he fled on foot and disappeared into the night. An FBI agent, who was the primary officer chasing him, said he ran like a deer. After obtaining a search warrant for his house, we found a duffel bag hidden in a doghouse containing over $200,000. We knew we had our man.

It took a month before he was tracked down again. An anonymous source contacted us claiming that the suspect was originally hiding in California but had recently returned and was checked into a local motel under a false name.

Editor’s Note: We pay $100 for each account we print. Send to the magazine, c/o “Police Stories.” Email Us 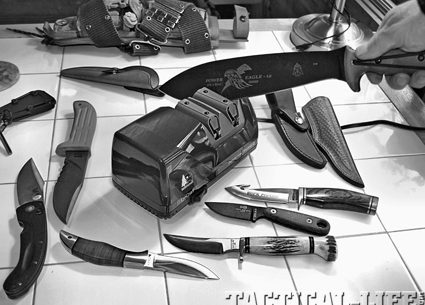