0
SHARES
47
VIEWS
Share on FacebookShare on Twitter
This student works on his trigger control under the watchful eye of instructor David Bowie.

Niche training seems to be all the rage theses days. Programs like how to draw from an ankle holster while ground fighting or how to use a carbine at 300 meters are quite popular and that is fine, but how many people truly understand the basics or fundamentals of combative shooting? “Combative” is defined as the person who is ready and willing to fight back, which makes combative shooting different from competitive shooting.

“Shooting is shooting,” you say? No, it’s not…the difference between competition and combat is that nobody is shooting back at you. In competition, a pre-event walk through is okay on many occasions…I have yet to hear of a gunfight where the participants got a “walk through” before the fray began. If they did, they would know exactly what tactics and techniques they would need, and the all important crisis decision-making (which makes actual combat so difficult) would be a non-factor in the incident.

There is no way you can train for every potential situation you might face, regardless of how much time or money you expend. The best that any of us can do is to obtain a solid understanding of the fundamentals of weaponcraft and then have the presence of mind to know what we need to pull out of our skill set to meet the threat we face. The ability to do this is difficult, but it will be flat-out impossible if we do not have the fundamental skills needed to fight back. One thing I have learned over the years is that many folks can talk a good game; far fewer can actually perform the skills needed to prevail in armed conflict. 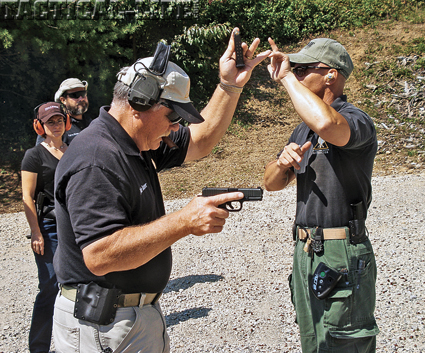 John Benner and instructor David Bowie show the students how to properly grasp a magazine for a proper speed reload.

The Tactical Defense Institute (TDI) has become one of the “big name” shooting schools in the United States along with facilities like Gunsite, Thunder Ranch, US Training Center (formerly Blackwater), Sig Sauer Academy and Front Sight. TDI focuses on a complete preparation package, which includes training in handgun, carbine, shotgun, less-lethal weapons, knife, open hand techniques and even medical self-help training. I recently had the opportunity to attend TDI’s Level I, II and III courses, which are the “bread and butter” of TDI’s pistolcraft program.

Simplicity
Founded in the mid-1980’s by President and Chief Instructor John Benner, TDI is located in Southern Ohio on 186 rolling acres of wooded land that offers three shoot houses, a two-story force-on-force house, a 400-yard rifle range, multiple pistol ranges including a steel range as well as a classroom and pro-shop. While TDI focuses on the armed citizen, they are also well known in the law enforcement, private security and military communities, regularly training personnel from these sectors. When I was the commander of a multi-jurisdictional drug task force, I hired TDI to train my investigators in raid planning and forced entry to make sure they were prepared for such hazardous situations.

What I like about TDI is that they do not base their training doctrine on the latest Ninja-like, Spec-Ops fad — their curriculum is based on simplicity as they realize that it is the simple things that will work in human conflict. During my tenure, the task force performed hundreds of entries on crack houses and other fortified locations and we never suffered a single injury, let alone fatality — certainly an excellent record in the hazardous world of drug enforcement.

On this particular occasion, I went to TDI with my son-in-law who had recently obtained his concealed carry permit due to his profession. Being involved in travelling sales, he goes to areas that are certainly “high crime” locations (a homicide occurred at one of his stops just moments before he arrived), thus I felt that having a gun would be a prudent move. I trained him enough to get his permit, but I also realize that training family members is seldom a good idea; so I suggested he go to TDI. He agreed and I decided to go along to brush up on my fundamental skills. 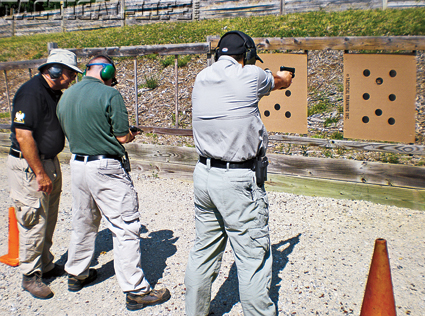 A large number of rounds were spent learning how to properly control the trigger. After all, trigger control is weapon control!

Basics Mastered
The first day, aka Level I, began with introductions all around and then moved into what was considered “reasonable” force. There have been a number of cases before both US District and the US Supreme Court regarding the use of force and though all involved law enforcement, such guidelines are applicable to armed citizens as well. Benner and his staff of instructors, which included law enforcement officers, a psychologist and a civil litigation lawyer, then moved through such topics as proper mindset, visualization of the threat, legal actions, civil litigation and finally the fundamentals of shooting. The TDI Staff made it quite clear that shooting was not the solution alone, that students also needed to understand when they could employ deadly force and what to expect after one uses it.

The class then moved to the range and started working on trigger control. In reality, trigger control is really weapon control and if the student did not gain a good comprehension of how to manage the trigger on their chosen gun, they would struggle throughout the remainder of the course. Trigger manipulation is the most basic of skills and hundreds of rounds were fired on 3-inch dots and 6-inch ovals in an attempt to get the students to understand trigger control. In the end, I would say that they were quite successful as there was not a poor shooter in the group.

From here, the class moved into working from the ready position and in the case of TDI, the preferred ready position is the Chest Ready Position places the gun high in the center of the chest and pointed straight ahead parallel to the ground. John Benner explained that he preferred this position as the shooter could return fire anywhere from next to the chest to full extension of the arms. Regardless of whether or not you agree, one thing that cannot be argued is that the position results in fast and accurate shots. It can also be mastered very quickly and easily practiced. In the end, it’s up to the individual to know when it is and when it is not proper to deploy their gun and no particular ready position will change this.

Day two (Level II) involved lessons in how to execute a smooth but fast draw stroke, a smooth and fast reload, and how to quickly and easily clear the semi-autopistol of malfunctions. The TDI Staff who taught these sections made it very clear that fast muscle motion would not result in a fast draw or reload — it would just result in spastic action. The best way to be fast when drawing or reloading is to take a hard look at what you are doing and eliminate unnecessary motion. The best place to master these skills is not on the range, but in a secure location at home using dry fire. Like any quality shooting school, TDI makes it clear that many shooting skills can be improved via a quality dry-fire training program. The great thing about the techniques taught at TDI is that they keep them simple…and simple is easy to both remember and practice, making it all the easier to keep critical skills sharp. In addition to these skills, reinforcement of trigger control continued with staff members keeping a close eye on the student’s trigger fingers. The student to instructor ration was quite high in the class (about three to one) so a great deal of individual attention was given. 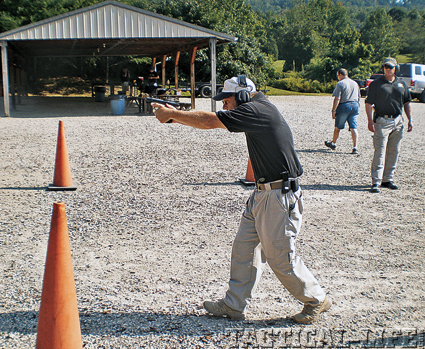 Day two ended with how to shoot on the move in all directions. While shooting and moving is often considered an “advanced” skill, in reality it is a necessary skill as history has shown that a moving target is harder to hit. Having the ability to hit what you are shooting at is a huge advantage and the folks at TDI realize this. Thus a great deal of time was spent on it as being able to do it would be of great importance during Day Three, which would include extensive instruction in how to conduct a building search. In preparation for the stress created by this exercise, Staff Instructor and practicing psychologist Joe Wicker prepared the class by introducing them to relaxation exercises and visualization practice.

Day three, or Level III, was dedicated to review of the first two days and then immersion in building search techniques. John Benner and his staff made it understood that searching one’s home or any building alone is one of the most hazardous things one can undertake and if it can be avoided, do so. Understanding that, instruction was given on how to best accomplish this most dangerous task. Understanding angles and distance are of supreme importance when involved in any building search situation. Students were given instruction on how to “slice the pie” and “drop out” to get the best angle of fire on a potential adversary. Once these skills were understood, each student undertook several actual live fire searches in different shoot houses under the watchful eye of a TDI instructor.

Final Notes
In the end, all of the students came to understand that searching any structure for potentially armed offenders is nothing like you see on TV. It is stressful, frightening and filled with potential pitfalls that could easily end up with the legally armed citizen getting hurt or killed. If a confrontation can be avoided, any smart armed professional will do so and that is what they create at the Tactical Defense Institute. Whether an armed citizen, security professional, law enforcement officer or military officer, TDI has a program that will make you a better prepared individual…and preparation along with confidence backed by real skill is what will get you through an armed conflict. Find out more at tdiohio.com or call 937-544-7228.