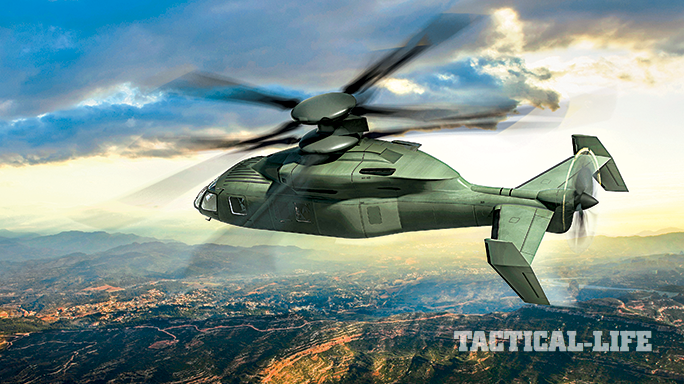 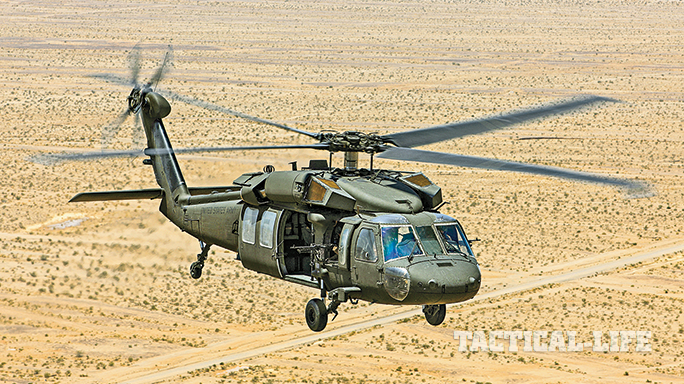 2 of 5
Combat Vehicles: Sikorsky’s SB-1 Defiant Helicopter
The goal of the Joint Multi-Role (JMR) program is to replace several aging helicopters in service, including the Sikorsky H-60 Black Hawk. 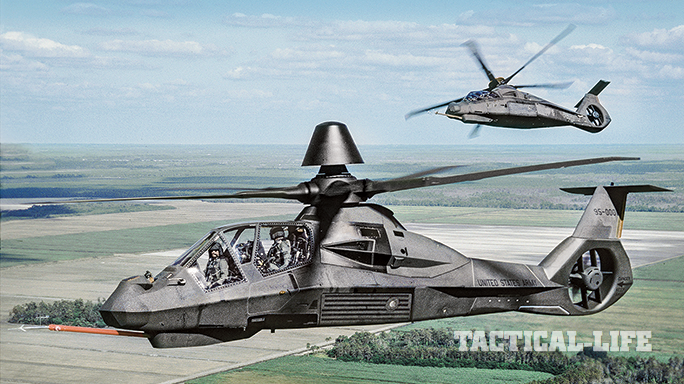 3 of 5
Combat Vehicles: Sikorsky’s SB-1 Defiant Helicopter
Boeing and Sikorsky have teamed up for prior projects, such as the RAH-66 Comanche armed reconnaissance helicopter. 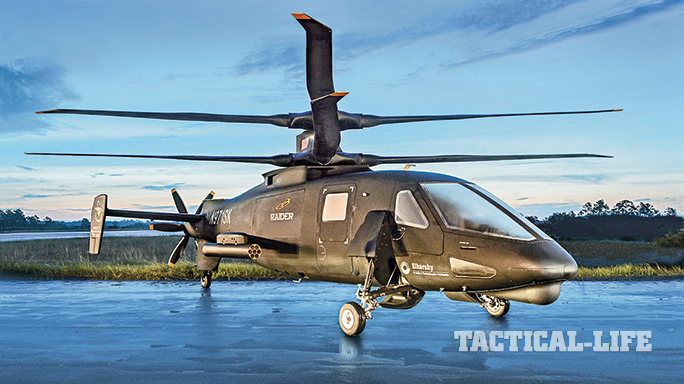 4 of 5
Combat Vehicles: Sikorsky’s SB-1 Defiant Helicopter
A mockup of Sikorsky’s S-97 Raider, which shares some design characteristics with the SB-1 Defiant, sits on a flight ramp. 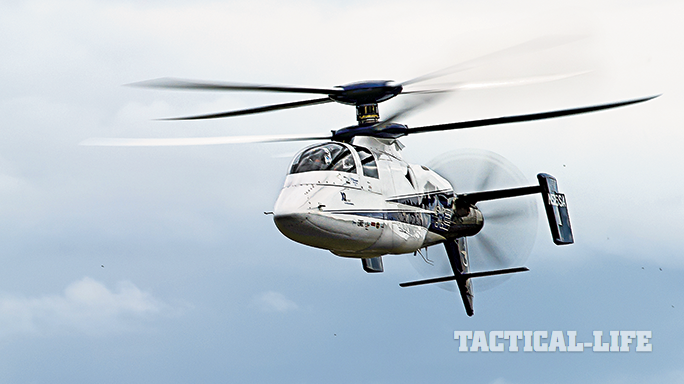 5 of 5
Combat Vehicles: Sikorsky’s SB-1 Defiant Helicopter
In 2010, the Sikorsky X2, a concept demonstrator and precursor of the SB-1 Defiant, flew at a speed of 290 miles per hour in level flight. 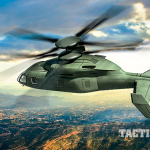 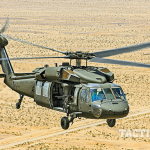 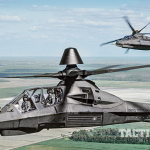 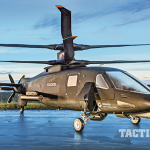 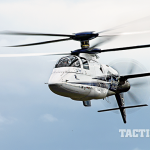 Helicopters offer a lot of benefits when it comes to powered flight. Their operational advantages—the ability to take off and land vertically, or nearly so, and hover in static position while in flight—make rotorcraft essential platforms for civilian and military operators. However, these capabilities come at a cost. Conventionally configured helicopters, with a main rotor overhead and a tail rotor to counter the torque effect of the main rotor, have apparently long since reached their absolute performance limits. They are costly to procure and operate. Operationally, they are far slower, with far less range, than comparably powered fixed-wing aircraft. The implications of these limits, particularly for military users that must coordinate combined operations with airplanes, have pushed armed forces to develop some truly innovative solutions that can expand rotary-wing performance.

Several approaches to enhance helicopter effectiveness have been explored over the years, and the U.S. Army is now preparing to evaluate two very different designs that increase helicopter range and speed while retaining hover and vertical takeoff and landing (VTOL) capabilities.

Competing designs for the U.S. Army’s new Joint Multi-Role (JMR) helicopter program are the SB-1 Defiant, a coaxial rotorcraft with a pusher prop, commonly referred to as a compound helicopter, produced by a consortium involving Sikorsky Aircraft and Boeing, and the Bell Helicopter V-280, a third-generation tilt-rotor aircraft similar to but smaller than the U.S. Marine Corps’ V-22 Osprey. Both designs are scheduled for evaluation after the completion of concept demonstrators in late 2017.

Because Ospreys have been in operational service since 2005, following about 20 years of design and development, tilt-rotor capabilities—taking off vertically, converting to a turbo-prop aircraft for flight, then switching back to helicopter mode for landing—are well documented. The new Defiant design, while derived from other test aircraft, has not been adopted in the past, and its design warrants some exploration.

The Defiant’s compound concept has many indirect predecessors. The British Fairey Rotodyne first flew in 1957. It was really a turboprop airliner capable of carrying up to 75 passengers. Its large main rotor, powered by bleed air from its two wing-mounted turboprop engines, permitted vertical takeoffs, landings and hovers. In flight, the aircraft performed as an airplane. But its high cost and lack of orders ended the program in 1962. Lockheed’s AH-56 Cheyenne added a tail-mounted pusher prop to its conventional attack helicopter program competitor that increased its speed to nearly 250 mph, but the design lost to the AH-64 Apache.

Coaxial rotors also have a long history, most notably at the Kamov Design Bureau in Russia, which has produced at least 10 military types. The primary advantage of coaxial counter-rotating rotors is the cancellation of torque, eliminating the need for tail rotors. In addition, the design eliminates dissymmetry of lift, increases the payload and improves control in flight. The rotor system is, however, complex and expensive. Mainstream manufacturers have not embraced these technologies, but Sikorsky broke the mold with the S-69 Advancing Blade Concept demonstrator in the early 1970s and the more recent X2 high-speed demonstrator, which reached 290 mph in level flight in 2010. The S-97 Raider high-speed scout and attack compound helicopter developmental prototype, now in production at Sikorsky, utilizes many of the same design features and is aimed at the currently unfunded lightweight-class JMR competition.

Boeing, with experience in both tandem-rotor heavy lift (CH-47 Chinook) and attack (AH-64 Apache) arenas, has partnered with Sikorsky on the medium-weight-class JMR. The companies combined in the past to produce the high-tech RAH-66 Comanche armed reconnaissance helicopter, a successful rotorcraft that the Army nevertheless cancelled in 2004 because of budget constraints. A heavy-lift JMR category is also planned but not currently funded.

In a recent telephone interview, Doug Shidler, the Sikorsky Defiant program director, and Pat Donnelly, the Boeing SB-1 program director, described the new design and its capabilities. Precise technical specifications of the production design are, of course, undefined.

“The Defiant technology demonstrator will soon begin construction,” Shidler said. “We expect to begin flying in 2017. Our design follows the X2. We’ve proven the physics of that technology, and we’re applying it to the S-97 Raider. Sikorsky Boeing is leveraging off that approach to produce the Defiant.”

“A virtual firewall separates the SB-1 team from the S-97 Raider,” added Donnelly, “but we’re able to use that program’s experience to reduce risk, and cost, in SB-1 development.”

For comparison, the S-97 Raider weighs approximately 11,000 pounds, and the Defiant will tip the scales at about 30,000 pounds, substantially heavier than the 22,000-pound Black Hawk it is intended to replace.

“The Defiant’s size is derived from the government’s requirements,” Shidler noted. “The Army wants the helicopter to carry 12 combat-loaded troops, each weighing about 335 pounds, at 230 knots, with an operational range of 424 kilometers and the ability to handle high-hot conditions at 95 degrees Fahrenheit and at an altitude of 6,000 feet above sea level. The customer’s inputs drive design, and it’s worth noting that our offering meets those requirements and exceeds the stated air speed.”

The SB-1 Defiant’s configuration also addresses low-speed maneuverability, a critical factor when flying into or out of landing zones. “Our survivability is equal to or better than the Black Hawk, in large part because of the control benefits of the counter-rotating main rotors,” Donnelly commented. “Even if the SB-1 Defiant loses the pusher propeller on its tail, the rotorcraft will still fly well with full command authority, able to move at speeds of 150 to 160 knots, equivalent to a conventional helicopter.”

The pusher prop also provides advantages, Donnelly added. “The platform has great agility, with a high rate of climb and twice the speed of a conventional helicopter. The Defiant can hover nose down or nose up, at plus or minus 20 degrees, enabling the flight crew to maintain an excellent sight picture while approaching or leaving a landing zone, unlike conventional helicopters. In addition, attitude control means flight patterns in ascent or descent can be steeper and more compact, reducing vulnerability to adversaries on the ground. Finally, if the crew disengages the prop on approach to landing, the Defiant’s acoustic signature is about half that of a conventional rotorcraft. These are capabilities that enable pilots to come in fast, slow or quiet when needed.”

The attack version of the design is not finalized, so it remains to be seen if it will carry externally mounted or retractable weapon stores.

The Defiant is now in its detailed design phase. No suppliers have been announced as of November 2014. Production will take place at Sikorsky’s flight test facility in West Palm Beach, Florida, for the single-technology demonstrator. The contract will fund flight tests and evaluations from 2017 until 2019 and assess the demonstrator’s key performance parameters. The flying article will use basic current avionics systems. “The Army is following a parallel path for future avionics architecture, but the programs are separate,” Shidler explained. “ At the same time, the Sikorsky Boeing team will design and develop tools used in production to reduce risk, enabling the program to move ahead quickly if the Defiant is selected as the JMR.”

As for costs, it’s too early to tell. “The government program is focused on concept development for now,” Donnelly said. “We’re going to help them field a platform that is far more capable, but acquisition and operational and support cost targets are all TBD.”

According to Shidler, “The Army has a stated objective of replacing the UH-60 Black Hawk and the AH-64 Apache, the service’s utility and attack helicopters, respectively. The analysis of alternatives in 2017 will be the kickoff for this process. We know the missions of both these rotorcraft completely because Sikorsky builds the Black Hawk and Boeing builds the Apache. Obviously,
we want to be involved in producing future rotorcraft.”

“The entire program will only be successful if the Department of Defense is able to show that the proposed replacement rotorcraft designs are more efficient than the Black Hawk and Apache fleets in terms of performance and cost,” Donnelly added. “Our job is to support the government and enable our military customers to understand the art of the possible.”

Both program managers emphasize that the current effort is just the start of a future effort that will take many years. “The program doesn’t become real until we hit a milestone that triggers production,” Donnelly said. The government has told us that they expect to complete the analysis of alternatives in 2019 or 2020, using the technology demonstrator that we’re ready to manufacture.”

“The competition will start all over again once the analysis of alternatives is complete,” Shidler concluded. “There will be no guarantee that the Department of Defense will select one of the two designs currently underway; another company could join the competition at that point.”

Based on past experience, however, it seems likely that the next generation of military rotorcraft will follow one of two revolutionary paths that will take the military’s rotary-wing operations to unprecedented levels of performance. 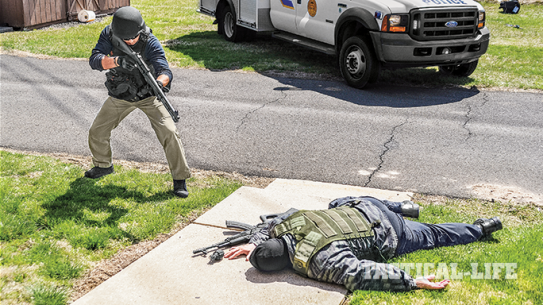 Tactics to halt multiple attackers before they cause mass-casualty disasters!