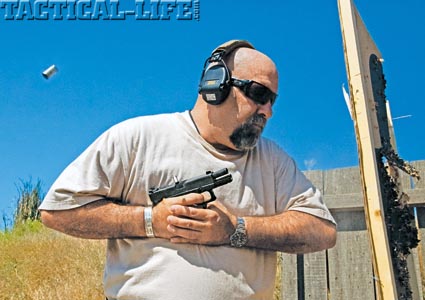 For CQB, lock your sidearm in high and tight. The support hand can be used for a Harries stance or a powerful “V” elbow thrust. Hiro Soga Photos

The truth about gunfights with handguns is that they often more closely resemble a fistfight than what many envision and train for. Because handguns are so prevalent and carried for self-defense, this is the kind of weapon officers must train for in an attack. Another trend that has increased in the last 25 years is the tendency for very skilled criminals to disarm their opponents of their firearms. It’s imperative for officers to develop skills to work within arm’s reach.

I have found over the years that the most successful people at dealing with violent encounters are those who can execute the fundamentals rapidly and without hesitation. With this in mind, I tend to gravitate to simple, proven techniques rather than a complex set of responses that the brain has to sort through under the compressed timeframes of a violent encounter. I teach three techniques for dealing with both weapon retention and shooting within arm’s distance that are triggered by the direction the flow of the fight is going. 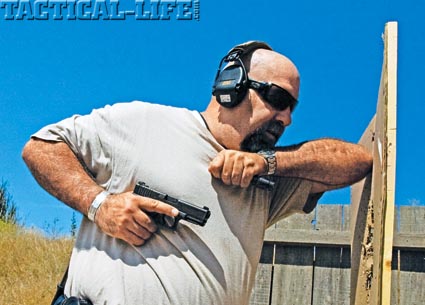 General Purpose
A general-purpose technique that works well in a myriad of situations is to draw or retract the handgun to a position just under the pectoral muscles and offset to the side. I use the base of my shooting hand to index into my body to keep this position consistent. You orient your handgun outward in order to allow it to function without interfering with the slide or cylinder movement, which could cause a malfunction. I like this index position because it works well with both revolvers and semi-auto pistols, and allows for a very strong, locked grip on the handgun. I use my support hand to further lock the pistol in if the hand is free. Often, I have a flashlight in my support hand, which will lock into a Harries technique with the primary hand.

If an attempt is made to disarm the firearm, you can use your hips, hands and entire upper body to rotate the pistol out of the opponent’s hands. This technique should be used with a very aggressive and strong body position to allow your entire body to maintain balance and aggressiveness. Generally, having the pistol retracted and out of reach of an opponent will prevent an attack yet allow for the handgun to be effectively used if lethal force is justified. This position also allows you to use your elbows, combined with hip rotation, to strike and create distance. 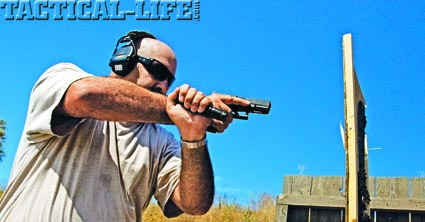 Retreating
One of the most well-known techniques taught for close-quarters shooting is known as the “speed rock.” The “speed rock” is usually taught as having your feet and body squared, your body arched back at the hips, your support hand raised and your primary hand firing the handgun as it clears the holster and is angled towards the attacker’s upper torso by your arching body. Recently, it has become popular to discount this technique by some trainers who lack the understanding of where and why this technique is effective. Many people teach and use this technique as a general-purpose technique. It is definitely lacking in this regard because of the off-balance body positioning that is not advantageous in repelling a violent physical attack.

Where the speed rock excels is as a retreating technique. It is best utilized when being forced backwards while trying to build distance. Unlike working on a square range or a dojo, the real world is filled with obstructions, walls, furniture and other “Murphy’s Law”-type items. The body positioning of the “speed rock” is used to create distance out of nothing. I have had the opportunity to spend some good training time with a World Fast Draw Association champion. The draw stroke and firing process is very similar to what is used in the speed rock. This is because the firearm has very little movement itself, and body movement is used to assist the draw and firing of the handgun.

In the real world, even the good guys end up behind the curve and backpedaling. At some point, you will usually end up against an obstacle or pinned into an area where you can no longer move back or off-line of the attack. At this point, the speed rock allows you to build just enough distance so you can draw and fire. When used properly, the speed rock is very effective for getting a gun into a fight while you are behind the curve and being attacked. 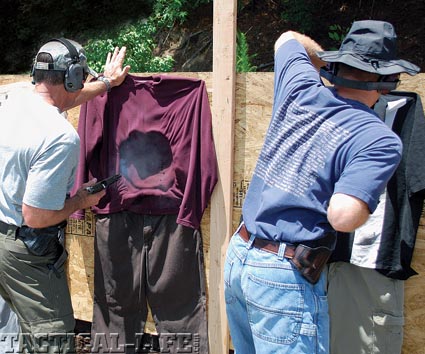 Officers can also practice CQB shooting with “wall drills” that focus on keeping the support hand well away from the muzzle. Rob Garrett photo

Advancing
I was exposed to a technique many years ago that I have used with great success. Essentially, this technique uses the hand position for general-purpose weapon retention with the firing hand, but makes better use of the support hand for both protecting the pistol and driving opponents away from you. In this advancing position, you hold your support arm just below your chin, bent back towards you to form a “V” with the point forward. This technique is of very limited use for most people, but for those in positions where you are required to aggressively close on bad guys (search warrants, non-compliant suspects, moving through people to get to an armed bad guy, etc.), this technique can be very effective.

I used this technique extensively for two things. The first situation would be when rapidly assaulting a bad guy who is not complying with verbal commands to “get down.” As I closed distance, just prior to impact, I would bring my pistol back from being extended towards the suspect, to retention, while being protected by the “V” of my support hand. The point of the “V” would then be the first thing to make contact with that individual and drive them back and down while the pistol is protected. Also, practice drawing to this position with an unloaded gun to ensure that you consistently position your support arm above and away from the handgun’s muzzle.

Like most techniques, when taught wrong, it is lacking. If you simply assumethis position and stand there, an opponent can use their hands to move you off-line or push the extended arm downward. If you use it with extreme forward drive and just prior to impact, the opponent cannot react to it. This flows into the other situation where it excels. When going through doors as the first man on a team, I would use the tricep area of my support arm in the “V” to drive the door completely open for my fellow officers/agents while protecting my pistol, allowing for instant engagement of any bad guys just inside the door and to clear them out for the team. This is the case where I first used this technique in the field. It resulted in a situation where the short suspect, who decided to try to stop the door from being opened, had my elbow impact his nose as I drove forward. He was knocked out cold. This anchored the viability of this technique for me instantly.

Another benefit is that it is very easy to transition from a Harries flashlight technique to this position and back. Any technique that cannot be used seamlessly in combination with a handheld light is of little value to me. This is a very advanced technique with limited application. It does not work well with compensated firearms and can be an issue with “blasty” revolvers. Be very careful when working with it.

Training
Nothing can replace solid, professional training. There are some very well-established subject matter experts on this type of shooting. Spend some time investigating an instructor’s background and ensure that they have the experience to safely and efficiently teach close-quarters shooting techniques. If you are in a gunfight, it is likely that it will be in close quarters, so choose an instructor wisely. Professional training is a great investment and will pay off in spades. 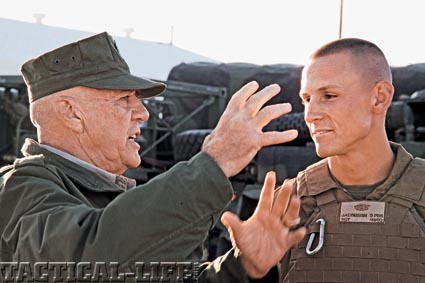 For CQB, lock your sidearm in high and tight. The support hand can be…