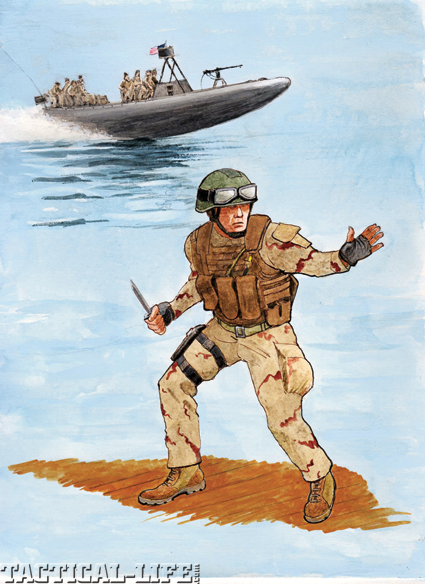 SEALs are extensively trained in knife fighting and are well versed in human anatomy and physio­logy. On the ultra-tight quarters of the vessel, a combat blade was the right tool for the job. Illustrations By Ken MacSwan

As of last February, Somali pirates were holding 33 vessels and 712 hostages, according to the International Maritime Bureau. Beyond the personal suffering of thousands of crewmembers taken hostage in recent years, piracy’s potential impact on global economic stability is enormous. In the Gulf of Aden, where Somali pirates operate, American shippers alone move more than $1.5 trillion in cargo every year. The kindest possible characterization of international response thus far would be “ineffective.” As did pirates from a former era, however, sooner or later these Somali parasites will exceed their nuisance value far enough to trigger an effective international response. Their cold-blooded murder of four American yachters late last February may help.

On Friday, February 18, at about 1600 local time, the Danish Navy ship Esbern Snare reported to the 5th Fleet Maritime Operations Center that its helicopter had identified an American-flagged, privately owned yacht that may have been pirated. The S/V Quest was approximately 190 nautical miles southeast of Masirah Island, Oman, when it was pirated.
Four U.S. warships responded: the aircraft carrier USS Enterprise, guided missile cruiser USS Leyte Gulf; and guided missile destroyers USS Sterett and USS Bulkeley.

A Yemeni fishing vessel that had served as a mother ship for the pirates was seen near the yacht, when it was hijacked by pirates in a smaller craft, maritime officials said, but it disappeared once American warships closed in. Aboard the S/V Quest were co-captains and owners Scott Adam and his wife Jean, of Marina del Rey, CA, and Phyllis Macay and Bob Riggle, both of Seattle, WA. They had been part of an organized Blue Water Cruise sailing around the globe, but had taken an independent course from Mumbai, India, to Salalah, Oman. They had planned to make landfall in Djibouti for fuel, before passing through the Suez Canal into the Mediterranean. 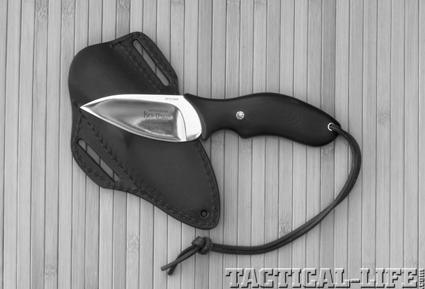 Not all D2 knives are created equally. This new variation should prove to be...