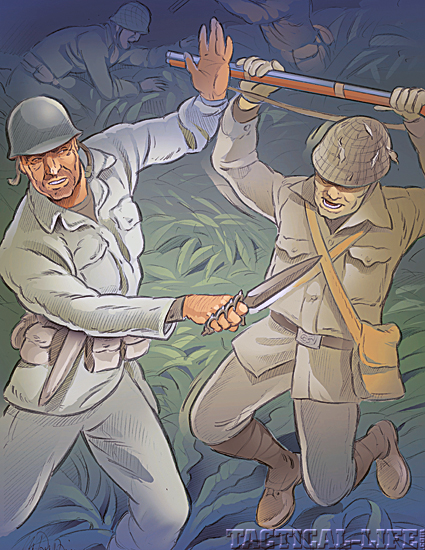 Among veteran paratroopers, one combat jump always comes up as the absolute drop zone from hell—the retaking of the Filipino island of Corregidor from the Japanese by the 503th Parachute Infantry Regiment. Only a tiny area on the topside of the island was available for a DZ, and it had been shelled and bombed into a nightmare of shattered tree stumps and concrete rubble. The target was so small that the C-47’s could only drop eight-man “sticks” on each pass over the island. They also had to jump at a low 500 foot to insure that the 22-mph winds didn’t blow them completely off the island (normally, this would be considered too high of wind to jump, but you do what you got to do). As the planes made their repeated passes through Japanese anti-aircraft fire, the jump height was lowered still farther to 400 feet, making for some really hard landings in the bomb craters and destroyed buildings.

Roughly two battalions of infantry with supporting units, for a total of 2,050 men, survived the drop. Army intelligence had told them to expect 600 to 1,000 Japanese, but what they found were actually 6,000 ready-to-die-for-the-emperor naval infantry (Japanese Imperial Marines). As expected, not all of the jumpers landed on the DZ, and some were blown over the cliffs surrounding the mountaintop or out to sea where waiting PT boats tried to pick them up.

Once the Japanese realized this was their day of reckoning for the crimes they had committed capturing Corregidor, the battle turned into a series of suicidal kamikaze charges by groups of up to several hundred enemy. Given the short ranges involved, these could not always be stopped without the fight becoming a hand-to-hand brawl of bayonets, swords, combat knives and rifle butts. But that was just the kind of combat paratroopers have always specialized in.

During one particular kamikaze charge, a group of 22 Imperial Marines stormed out of tunnel near the edge of the cliff surrounding the topside of the island. The charge was so sudden and fast that it actually carried most of the Japanese troops right over the ledge where they fell to their death—all except one, who grabbed Private Gerald Kirkpatrick and tried to take the paratrooper with him.

While the brass-knuckle handled WWI Model 1918 Mk-1 Trench Knife had been replaced by the lighter, leather handled MK-3 Trench Knife in 1943, many paratroops like Kirkpatrick hung on to the older model. No one could deny it would be terrifying in close combat if things ever came down to it. And for Kirkpatrick it just had—quickly reaching down to the weapon on his belt, he drew the dagger and stabbed the enemy until he released his hold in death.

By the end of the battle, over 5,000 Japanese troops were dead; at a cost of 455 paratroopers KIA and around 600 wounded. The 503rd had earned the motto they carry to this day, “The Rock,” the hard way—fighting with rifle, grenade, bayonet and trench knife.

SEND US YOUR STORY!
Tactical Knives pays its standard column rate for the “It Happened To Me” stories it publishes.
If you have one you would like to share with our readers, please send it to Tactical Knives, P.O. Box 538, Castle Rock, WA 98611 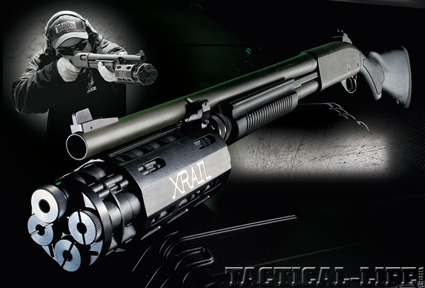 Max out your LE or 3-Gun 12 gauge shotgun with the 14-round capacity XRAIL...