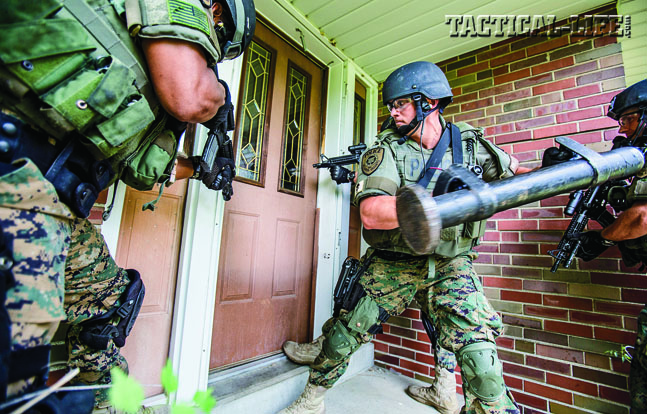 1 of 4
Dynamic vs. Breach & Delay 1
Any dynamic entry is a major risk for SWAT teams. Although the front door is properly covered, the ram man has to stand squarely in front of it, making him vulnerable to a suspect’s attack. 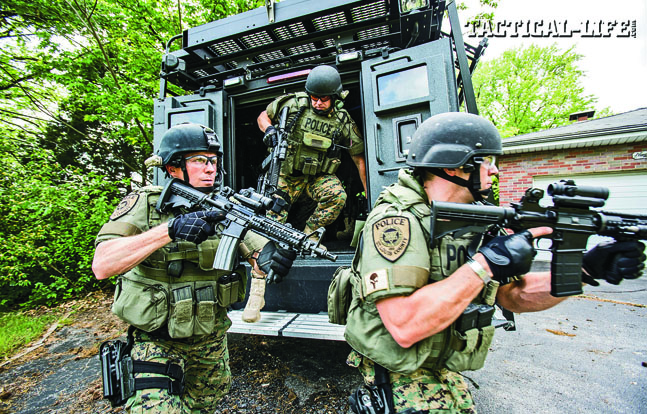 2 of 4
Dynamic vs. Breach & Delay 2
SWAT needs to get into position rapidly once deployed, but going into a home just as quickly may not be the best option. 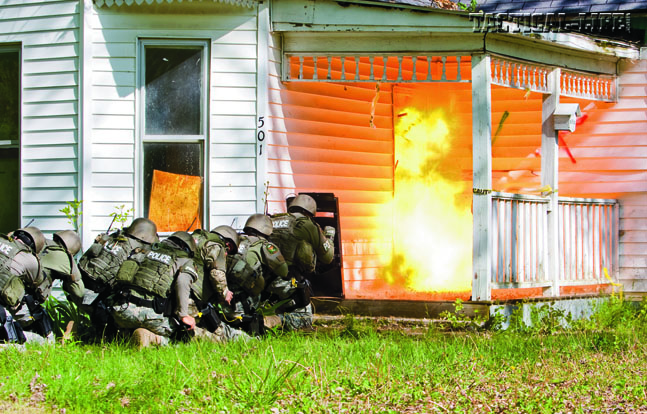 3 of 4
Explosive entries
Using explosives for breaching doesn’t guarantee that suspects inside won’t resist—it just opens the door. LEOs are vulnerable while awaiting the breach and when they enter the “fatal funnel.” 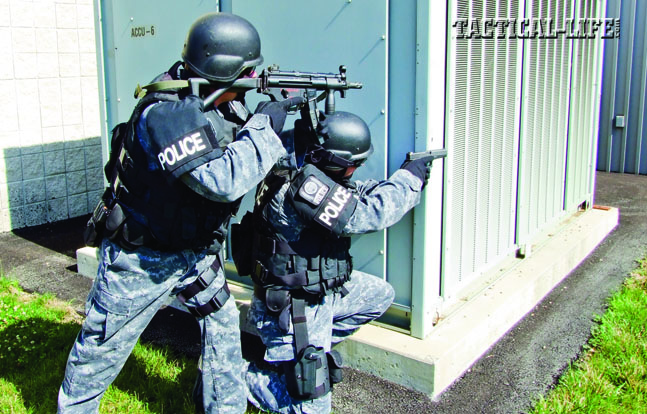 4 of 4
Dynamic vs. Breach & Delay 4
For a breach and delay, officers must cover the ported door from positions of safety, sometimes for long periods. 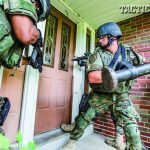 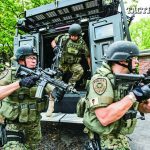 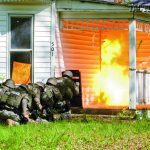 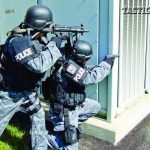 Some 12 years ago, I started my tour on the sheriff’s department’s SRT team.

As a younger member, I was all about doing dynamic entries for all our callouts. Of course, we thought dynamic entries were very cool. For the uninitiated, dynamic entry is that form of entry using surprise combined with sensory-overwhelming force (such as flashbangs) and speed to enter a structure and rescue hostages, seize drugs or weapons, and arrest suspects. We, like any other SWAT team in our area at the time, loved doing dynamic entries and trained so our operations were as flawless as possible.

One day, some four years ago, I read an interesting article about a new technique that was called “breach and delay” or “port and delay.” With this technique, SWAT officers don’t actually enter the structure after hitting a door with a ram, a pull or an explosive breach. This breaching or porting action gives the officers a view of the interior, demanding the suspects give themselves up while waiting in a safe vantage point. In that original article, it was even suggested that a K9 on a long leash could search or apprehend a visible (unarmed) suspect that didn’t want to give up. It was also through this port that gas could be inserted. By using breach-and-delay tactics, officers could avoid having to enter the “fatal funnel”—the door—to make the apprehension. The house is surrounded, and the suspects aren’t going anywhere. After a block of training and practice, we adopted the technique as our official policy to be used in most of our operations.

Fast-forward to a recent Ohio Tactical Officers Association (OTOA) Tactical Leaders conference held at the Columbus, Ohio, Police Academy late last year. The major emphasis throughout the conference was the need for teams to transition away from using dynamic entries for all operations, instead reserving it for hostage-rescue situations. Of course, a number of the younger cops in the group remained less than convinced, which is the nature of young cops. However, a lot of converts were gained when a police documentary was played for the audience.

Dynamic Disaster
Cameras followed a team from a well-known agency in the American West. They were given a mission to serve an arrest warrant on a suspect who, besides being involved in the drug trade, was known to have automatic weapons (such as genuine AK-47s) and live hand grenades. As the well-equipped team planned for the mission using dynamic entry methods, I was thinking, “Oh no, you’ve got to be kidding!” There was no discussion of bringing in the bomb squad—I’m thinking booby traps—and there were some important gaps in the intel. Yikes. There was no talk about anything other than speed, shock and surprise—throwing flashbangs and using the ram. They seemed certain that all the standard SWAT entry techniques would be enough to totally overwhelm the highly motivated and dangerous offender inside. This was a very recent encounter, and it wasn’t like the breach-and-delay technique wasn’t an option. Did I mention that a wife and child were known to be in the residence as well? And we’ll never know if the presence of TV crews made the team want to go for the maximum high-speed, low-drag effect.

The team arrived in the early morning hours. They deployed from their vehicle in textbook fashion and hit the suspect’s door with a ram. Once the door was open, in went a flashbang. The team leader—who was to have been second in the door, according to the plan—decided to charge ahead of the pointman and crossed the doorway threshold ahead of him. It was then that a burst of full-auto 7.62x39mm rounds erupted from the interior, and the team leader went down. The flashbang didn’t faze this particular suspect—he was used to explosives. The team performed an emergency withdrawal, and the leader was dragged out to safety, having been hit with some 14 rounds. Fortunately, he was wearing the appropriate armor plates and 11 rounds that hit him in the chest were stopped. Two rounds hit him in the abdomen, and one hit his left hand. For whatever reason no EMS was standing by, and the other team members had to apply first aid as their leader was in danger of bleeding to death. He was evacuated to safety and survived—barely.

In the meantime, the team regrouped and, in essence, ended up doing what I feel they should have done in the first place: a breach and delay. The suspect’s family came out, and he surrendered without further incident. At the end, the disabled team leader was given an award for bravery by his agency, and it was deserved. It was uncertain if he would return to the team or even to standard duty. A team lost a valuable leader, a department may have lost a valuable officer, and a young son almost lost his father. It didn’t need to happen. Had breach-and-delay techniques been used in the first place, the outcome would have been the same—an uninjured suspect and his family—but with the difference of an uninjured officer. I think seeing the video may have convinced many of the unbelievers in the crowd, but judging from some of the conversations during the rest of the breaks, not all of them were convinced.

Moving Forward
Using breach-and-delay tactics for SWAT situations that don’t involve an immediate threat to life clearly has advantages over dynamic entry techniques in terms of safety for the officers as well as the primary suspect and other individuals who may be present at the scene. Breach and delay is great for dealing with individuals who have barricaded themselves without taking additional hostages. By porting the door, and not a window, it shows the perpetrator that SWAT is indeed on the scene and could enter his or her house or apartment if needed. It can be an excellent starting point for establishing verbal communications, either by direct voice or a throw-phone.

SWAT officers stay back behind the heaviest level of cover they can find—either existing cover or a shield—so they can monitor the situation in real time and intervene by lethal or less-lethal means as directed by the suspect’s actions. If access is easy, an armored vehicle can be pulled right to the ported door for intimidation, communication or weapons delivery from behind cover. No matter which position or equipment is used, the officers need not cross the threshold of the door. It is called the “fatal funnel” for a reason. You should only go through the doorway if and only if someone else’s life is in immediate danger, because yours certainly will be. It is much better to talk the suspect out to you, or even force them out via chemical munitions, than for you to go to them. We do this for felony traffic stops—why not for felony situations in a residence?

Let’s resolve to work smarter, and not harder and more dangerously, in the future. Save dynamic entry for saving lives. 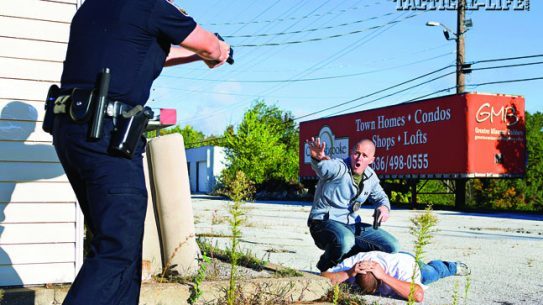 Four cases highlight how to avoid the danger of blue-on-blue shootings!