I had been working for a Sheriff’s Office for approximately five years, when I received my wake up call. It was a relatively warm April afternoon in 2005 when I was dispatched to the local mental health clinic for a patient transport. I was to transport him to an inpatient facility in the neighboring county. It was getting close to the end of my shift and it would be a two-hour drive to and from the hospital, so I was immediately placed in a bad mood (Error #1).
I’m not sure about other states, but in our state it is the duty of the Sheriff’s Office to transport mental health patients, or “Consumers,” when they are committed.

I arrived at the clinic and met with the counselor and the patient, whose parents were also present. Once the patient, we call him “Brian” for the purpose of the story, saw me arrive, he became irrate verbally. Brian started making statements such as “just kill me” and “I’m not going,” just like any other I have had dealings with. With a little coaxing from his parents and counselor he calmed down enough to get him in the car. I was able to handcuff him with little resistance. Another one just like the rest of them (Error #2).

Unknown to me at the time, Brian had just gotten bailed out of the county jail a day or two prior. He was arrested for possession of a stolen firearm with which he attempted to rob a woman. Oh yeah, he had narcotics on him too. Mommy and Daddy bailed him out and brought him to the clinic for some “help.”

I attempted to make conversation with Brian and put him at ease up for the drive up. I asked what music he wanted to listen to and changed it for him. For the next hour he would close his eyes, like he was praying or meditating. I did not think much about it at the time, I have seen weirder things. Upon our arrival at the hospital, I got Brian out of the car. Being this is a private mental health hospital, there is no secured area to take Brian’s cuffs off. Since he had not been a problem I took them off at the entrance of the facility. Brian asked me if I smoked, I stated “no.” But I did so happen to carry a pack of cigarettes in my car for “PR” work.

We stood under the over hang for a while he smoked, not saying a word. I was thinking to myself, what to do if he rabbits on me? I positioned myself to where he would have to run by me to get past my squad and I would just trip him. Brian’s smoke by this time was to the filter and my last words to him were, “Don’t burn yourself.”

Then it happened, I felt a sharp pain on the right side of my face and I started seeing stars. I immediately grabbed Brian and went to the ground. I do not know what I was thinking, I guess, “Don’t let him get away? Now the fight is on!” We started rolling on top of each other and I found myself on top of him. I saw blood falling on the pavement and didn’t know where or who it was coming from. I was brought back to reality when I felt Brian tugging on my duty weapon trying to get it out of my holster.

Luckily the department had just issued us Safariland Level II Raptor holsters, and this is what probably saved my life. Sometime during the struggle, my primary set of cuffs fell out of the open top case I used to carry. Brian grabbed them and was trying to cuff me. Somehow he was able to get one cuff on my left wrist, but I was not going to let him get the other one. I do not know what was going through his head, but I know what I was thinking. This crazy S.O.B. is going to cuff me and shoot me to get away. I don’t know how much time went by, but it felt like an eternity. All I was doing about this time is keeping him from getting my weapon and not getting the other cuff on me.

What I recall is a good citizen and a hospital staff pulling us apart from our death embrace. I got up and was able to get my secondary set of cuffs on Brian. I could not believe this had happen… I had been in law enforcement for over nine years, how did I let it? At least I lived to be able to think about what I could have done to prevent it. It all came down to complacency (Error #3). Since we were in another county when it occurred, I could not charge him, so the local Sheriff’s Office responded.

This is when politics get involved. The hospital would not take Brian, because he was too violent and the local jail would not take because he was on a doctor’s committal. To make along story short my Sheriff called their Sheriff and things got worked out. Brian was charged with assault and battery with intent to kill. He pled guilty. He was given the harsh punishment of 60 days confinement and 5 years probation.

I do not only live with a memory that will haunt me for the rest of my life, I have a nice scar on my right cheek. Yes, it was my blood on the pavement. As for Brian’s future, it will be filled with a lot of time behind bars. You see, Brian murdered a guy a little over a year later. He shot him in the head for unknown reasons.

I learned a lot from all this. I am going to make damn sure my next encounter turns out better for me than the perp. Stay safe, be vigilant and please, always remember the golden rule of law enforcement…   complacency can and will kill. 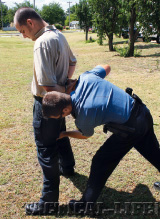 I had been working for a Sheriff’s Office for approximately five years, when I…