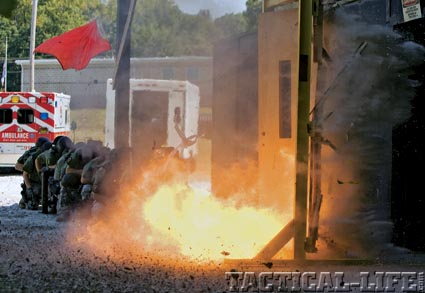 Consider a hypothetical case like this. Your SWAT team responds to a callout. A heavily armed and barricaded subject has taken a hostage and is making demands. You formulate a straightforward but theoretically effective plan—make a tactical entry with the benefit of surprise, take down the suspect if necessary and rescue the hostage. You have acquired all the information available regarding the location and its structure and plan accordingly. However, as your team enters, you find out that the information on the facility was inaccurate and the interior of the building has been modified since the floor plans you reviewed were drawn. Several heavy doors stand between you and the target. These doors, made of solid wood with steel frames, prove to be highly resistant to battering or ramming, taking up precious seconds as you lose the element of surprise.

To help avoid situations like this, the St. Charles County Regional SWAT team sent their first two operators, Sgt. Robert Koester and Deputy Dave Cathey, to learn explosive breaching from Forced Entry Tactical Training with instructors from Las Vegas PD, who frequently use the surgical application of explosives to assist law enforcement tactical operations. Sgt. Koester, a 29-year veteran and the county’s Bomb Squad commander, and Deputy Cathey, a 13-year SWAT veteran, were taught how to use blasting caps, detonating cord (commonly referred to as “det cord,” which contains the powerful explosive known as PETN), plastic explosives such as C4, and various types of firing devices. Breachers like Koester and Cathey were taught to create and use precisely shaped charges, such as line-folding linear charges, sliding-hinge charges, water charges and frame charges, to defeat specific obstacles and barricades like interior or exterior walls and doors made of wood or metal.

Running up and slapping a charge on a door or wall without calculating the correct amount can cause the entry to fail, or worse, bring harm to the hostages. An insufficient charge will not render a large enough hole for tactical operations, or it will fail to bring down a door, blocking the entry team while alerting the bad guys. But an excessive charge can cause needless structural damage or create dangerous pressure in the room being breached, which could injure or kill hostages. 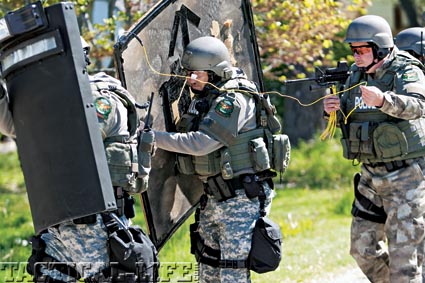 To minimize the time spent outside a target wall or door, operators can affix the correct demo charge to a sheet of cardboard, as shown here, then quickly get it in position.

Running up and slapping a charge on a door or wall without calculating the correct amount can cause the entry to fail, or worse, bring harm to the hostages. An insufficient charge will not render a large enough hole for tactical operations, or it will fail to bring down a door, blocking the entry team while alerting the bad guys. But an excessive charge can cause needless structural damage or create dangerous pressure in the room being breached, which could injure or kill hostages.

Calculating how much explosive to use is as critical as placing and fusing the explosive. So the St. Charles County Regional SWAT team routinely uses a worksheet to calculate and document the estimated safe-standoff distance and the pressure for the room being breached. The worksheet documents each team member’s designated assignment, tactical and medical contingencies, and the amount, application and results of every demolition fired, even in training.

That ensures that every use of explosives is a precise evolution, adding to the team’s training and experience regardless of the outcome. An unsuccessful attempt to use a particular explosive or location on a structure or door can be as informative as a blast that creates the intended effect.

Since working with explosives is both unforgiving and destructive, not only in their intended use, but also in handling and even during transport, safety and preparation are the top priorities. The St. Charles County SWAT team’s minimum requirement of personal protective equipment for merely handling explosive charges includes eye protection, ear protection, a helmet, body armor, gloves and a ballistic or non-ballistic shield. Transported explosives are secured and padded in cases by the bomb squad. 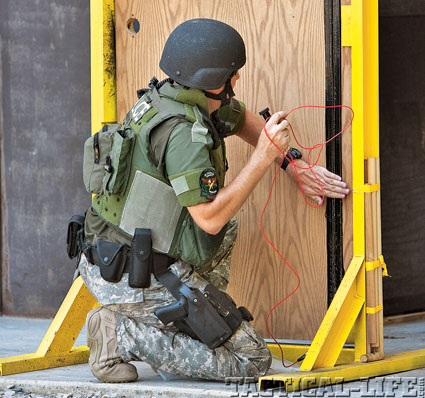 The key to any explosion is determining not only the where and how, but when. Making an explosive charge detonate exactly when you want it to is the tough part. Older fuses lit like a firecracker were replaced by more-reliable electrical detonators, but even those had safety issues that made them anything but foolproof. St. Charles County Regional SWAT team breachers use blast tubes. When initiated, they transmit a spark down a hollow tube to the detonator, eliminating the chance of a stray signal or electrical spark prematurely detonating a charge and having a very tragic effect.

The role of the law enforcement explosive breacher differs from the military’s counterpart—such as a member of an Army EOD team—just as the role of a SWAT countersniper is very different than that a military sniper. Both the police breacher and sniper have to ensure that they apply the minimum amount of force necessary, with precision, and only in the defense of lives.

The St. Charles County Regional SWAT now has the capability to use a variety of explosives, carefully calculated and knowledgeably applied, to open doors or put man-sized holes in walls. If desired, a charge can be used to fill the room with a swirling, disorientating cloud, or it can be tamped with water or another inert material to help direct the blast and allow the SWAT team to stay in close proximity, allowing them to enter the structure faster and engage a hostage-taker.

The surgical use of explosives by SWAT teams provides more entry options and can keep the entry stack out of the “fatal funnel” of doors and windows, or create alternative entry points a hostage-taker may not expect. The St. Charles County Regional SWAT team intends to never again be on the wrong side of a door with hostages inside and no way to get in. Now, with their explosive breaching capabilities, that won’t be a problem. 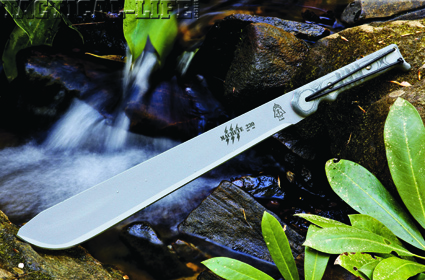 Age of the Machete | Machete Reviews