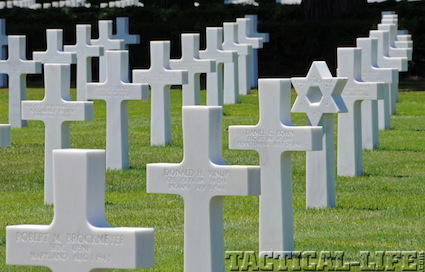 As you walk the long ranks of World War II grave markers carved from Lasa marble, you wonder what these soldiers, airmen and sailors thought about while fighting in Italy during their life’s final day.

Most interred at the Sicily-Rome American Cemetery and Memorial near Nettuno didn’t live long enough to write novels, discover planets, cure plagues or even launch careers. Young men at war aren’t mapping their futures as artists, laborers or scientists. Even individual efforts in war seem too insignificant at the moment to benefit a long-term mission.

No, as my wife, Penny, our daughter, Leah, and I paused on June 26 to read names on headstones, ranks, home states and dates of death, we assumed our countrymen probably just hoped to survive the day while performing their duties.

We drove here from Naples, where Leah is a nurse and Navy lieutenant at the U.S. support base. With the Fourth of July approaching, we thought it proper to visit the graves of those who never came home.
And so we wondered if Sgt. Arthur A. Brown of Wisconsin suspected he had glimpsed his final sunset when looking from beneath his helmet on January 31, 1944. Did he realize his life—and his service in the Army’s 15th Infantry, 3rd Division—would end the next day? 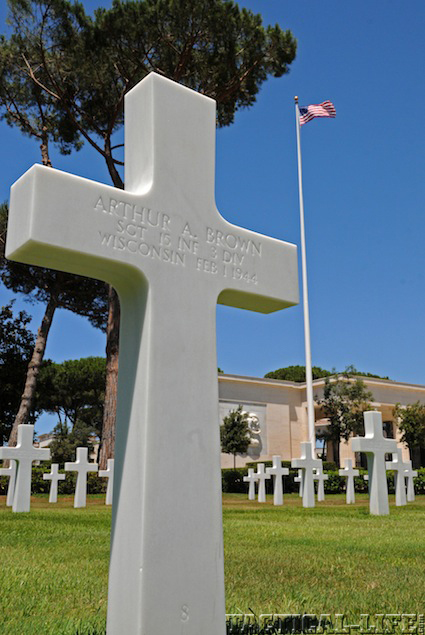 Sgt. Brown and the 7,859 other service members buried a mile from Anzio’s beachhead might have become actors, inventors or world leaders had they not died while shoving Germany’s army from Sicily and Italy. All that’s certain is they were young people someone loved, buddies with nicknames, sergeants who were cussed at and who cussed in return.

When they had moments to look beyond dreaded danger, they probably dwelled on home, loved ones and small pleasures once taken for granted. They were just like us. Heck, they were us. They liked fishing bluegills, hunting deer, jumping grouse, toting squirrel rifles and smiling as beagles bayed after bouncing rabbits.

Their letters home—shared in perpetuity through books, documentaries and HBO miniseries—tell us so. If you’d asked how they wanted to spend their final day, few would have said storming a beach, manning a gun turret or piloting a landing craft.

The names of Wisconsin’s fallen sound like guys we meet along trout streams, at boat landings and in deer camps. Here lies PFC Gilbert A. Kempen, 179th Infantry, 45th Division, who died February 23, 1944. He fell three weeks after Brown, and about two weeks after Sgt. Robert J. Baker of the Field Artillery Battalion, 34th Division.

Other Wisconsin names don’t sound so familiar, which isn’t surprising, I guess. They were born nearly a century ago, perhaps the children of recent immigrants or immigrants themselves. This headstone identifies Sgt. Gustave F. Dudaranke, 15th Infantry, 3rd Division, who died December 30, 1943, probably while fighting up the Italian peninsula from Salerno and Naples.

It’s little consolation to families, but at least most of the 7,860 headstones identify where sons, brothers, husbands, daughters, sisters or wives are buried. Yes, U.S. servicewomen died in Operation Shingle and other Italy/Sicily invasions. 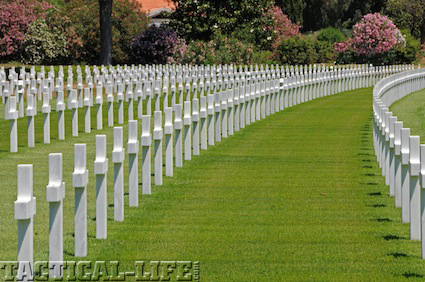 Many families don’t know with certainty where loved ones rest. You walk these long arc-shaped ranks of white headstones and wonder who lies beneath the 3,095 that state: “Here Rests in Honored Glory a Comrade in Arms Known but to God.” The names of the missing in action and unidentifiable remains are inscribed in the chapel’s walls at the cemetery’s memorial.

So much sadness is enshrined here. Among the buried lie 23 sets of brothers. Unlike the unknowns, who rest at random throughout the cemetery’s 10 plots, brothers lie beside each other.

Crosses mark the graves of 7,738 Christians of all denominations, and 122 Stars of David remind us Jewish soldiers died here, too. No matter their sex, race or religion—or whether they grew up in Wisconsin, Oklahoma, Pennsylvania or West Virginia—they now lie together, arranged in “gentle arcs on broad green lawns beneath rows of Roman pines,” as the guidebook reads.

All remain forever far from home, and all deserve our gratitude and remembrance of sacrifice.

More pressing, though, is our obligation to those serving today, and our prayers they’ll fulfill potentials still in discovery.