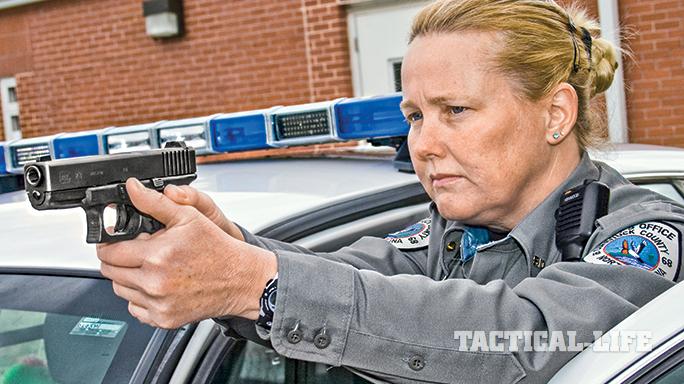 1 of 5
GLOCK on Guard: Why Female LEOs Choose the GLOCK
GLOCKs have consistent trigger pulls, which translate to more hits on target when needed. 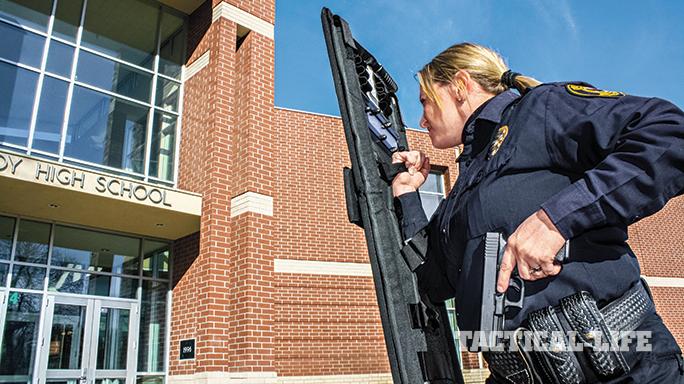 2 of 5
GLOCK on Guard: Why Female LEOs Choose the GLOCK
It’s important for officers to have complete trust in their sidearms. Many of the author’s fellow officers opted to spend their own money to carry a GLOCK on duty for this reason. 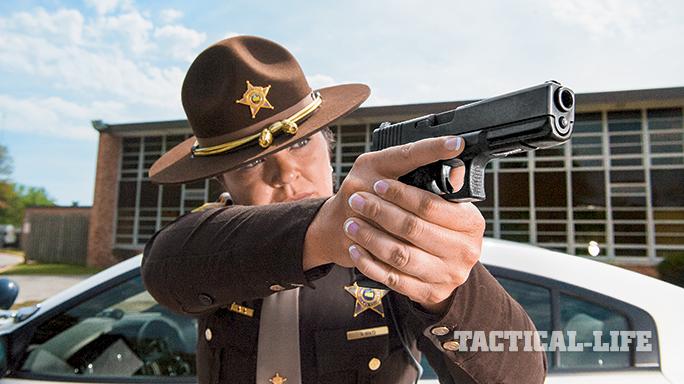 3 of 5
GLOCK on Guard: Why Female LEOs Choose the GLOCK
Female officers in particular have embraced GLOCK’s Gen4 platform, as LEOs can customize the grip for a perfect fit and switch the magazine catch to either side for faster, fumble-free reloads. 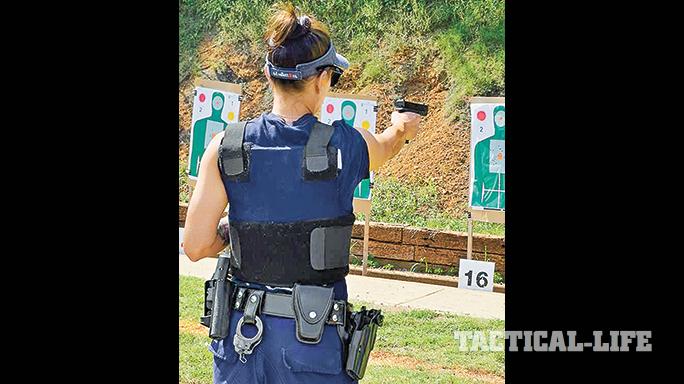 4 of 5
GLOCK on Guard: Why Female LEOs Choose the GLOCK
Many officers at the author’s agency improved their qualification scores just by switching to a GLOCK. 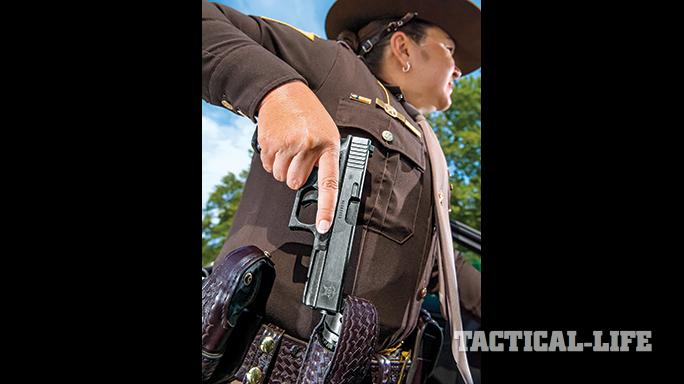 5 of 5
GLOCK on Guard: Why Female LEOs Choose the GLOCK
Female officers in particular have embraced GLOCK’s Gen4 platform, as LEOs can customize the grip for a perfect fit and switch the magazine catch to either side for faster, fumble-free reloads. 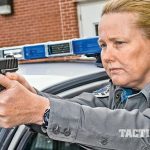 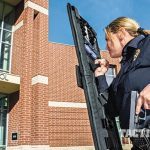 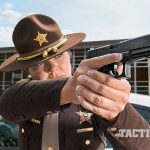 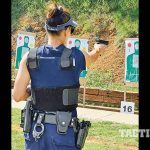 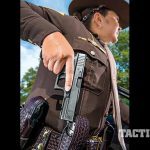 In law enforcement, on- and off-duty firearm selection is regularly dictated by policy. Some of these policies allow for no choice in the manufacturer or model of firearm the officer carries. And some policies may allow the officer to choose the caliber, but not the manufacturer. Other policies allow officers to choose from a variety of firearm manufacturers, models and calibers. Some law enforcement agencies equip their officers with department-owned firearms, and other agencies place the responsibility of that purchase on the officers—with or without providing a stipend to make that purchase.

When I initially became a police officer, my department’s policy was simple: Officers were only allowed to carry one make, model and caliber of firearm both on and off duty. The policy did not take into account the physical and experiential differences between officers, and each officer was expected to become and remain proficient with the department-issued firearm. The issued firearm was difficult to shoot, difficult to handle and impossible to carry concealed while off duty for many of the female officers. Over the course of almost two decades, my agency’s policies slowly responded to the needs of its officers, which improved the shooting skills of its female officers and also allowed them the opportunity to carry concealed off duty.

About five years into my career, my agency made a significant change to its policy on authorized duty weapons. The change, which was rumored to have been prompted by aging and problematic duty weapons—specifically a light primer strike/failure to fire during an officer-involved shooting—allowed officers to purchase GLOCK firearms at their own expense. My agency not only allowed the officers to purchase GLOCK firearms, but it also allowed officers to choose from the G23, G22 or G35. In addition, detectives, administration personnel and off-duty officers could carry the subcompact G27.

“Officers do not like to gamble with their lives. It only takes a couple of problems to rattlean officer’s trust in their sidearm.”

When this policy was enacted, the majority of officers who initially purchased GLOCK firearms at their own expense were SWAT officers and firearms instructors. Most officers, however, continued to carry the agency-issued firearm. But over the course of the next few years, the evidence was mounting that GLOCKs were superior to the issued weapon—and the street cops took notice. Prior to the authorization of GLOCKs, my agency had a lot of struggling shooters—I should know; I was one of them. Very few officers were both fast and accurate with the issued weapon, which was a double-action-only pistol with a 10- to 12-pound trigger pull. I purchased my first GLOCK, a G23, shortly after the implementation of the policy and was amazed by my immediate improvement on the range.

Fast-forward to 2007, when I became the range master for my agency. I noticed a disproportionate number of female shooters who regularly failed the qualification tests. We immediately compiled a list of shooter errors and noted that there were a couple of reasons for their struggles. Many of the shooting errors were related to specific characteristics of the department-issued firearms they were shooting. I knew that I had personally achieved immediate improvement simply by switching to a GLOCK, so my training cadre and I decided to individually coach all of our struggling shooters and have them shoot our personally owned GLOCKs. What we discovered was that by simply introducing the GLOCK, the majority of struggling shooters immediately improved their qualification scores. That was all it took to make believers out of those officers, and their improved accuracy compelled many of them to spend their own money and purchase a GLOCK. When I left the training unit in 2011, more than 50 percent of the officers in my agency had spent their own money to carry a GLOCK both on duty and off. Several officers even bought more than one.

My firearms instructors and I deduced that there were a couple features that made GLOCKs superior to the issued firearm for our struggling shooters, which dramatically improved their results. The first characteristic was the trigger pull weight, which fell between 5 and 6 pounds on the GLOCK. Because of the GLOCK’s SAFE ACTION, officers were able to break the shot sooner than they could with the department-issued, double-action-only pistols. The longer the trigger pull, the greater the opportunity for movement and other shooter errors to arise.

While running the range, I noticed the biggest increase in women purchasing GLOCKs when the Gen4 GLOCKs were introduced. The improvements GLOCK made with the Gen4 design tipped the scales for the officers who had been holding out on purchasing a GLOCK for on-duty carry. The Gen4 GLOCK was especially suited for female officers because of the interchangeable backstraps and the reversible magazine catch. These two features allowed officers with smaller hands to customize their guns. Switching the magazine catch to the strong side significantly improved shot placement for those with smaller hands, as they didn’t have to shift their grip to reload.

I spoke to our female officers who voluntarily switched to GLOCKs for their duty weapons to find out what models they chose and why. The caliber of the gun carried on duty is dictated by policy, but the model is left up to personal preference. Most of the women in my agency who switched to GLOCKs did so because they were able to shoot well with them when they tried out another officer’s model. Many officers cited their trust in GLOCK as the driving force in their decision. It was no secret that our agency had some issues with the department-issued firearm. Officers do not like to gamble with their lives. It only takes a couple of problems to rattle an officer’s trust in their sidearm.

The GLOCKs our female officers selected for duty tended to be models with 4- to 4.5-inch barrels, as they were easiest to carry, draw from a holster and shoot. Many of them cited the added benefit of being able to carry that weapon concealed, although it required some wardrobe adjustments.

Simply introducing GLOCK pistols to struggling shooters may correct many shooter errors. This is due to the design, function and characteristics of GLOCK pistols, which eliminate many of the obstacles officers with smaller hands experience. When my agency allowed officers to purchase and carry GLOCKs on and off duty in lieu of another firearm issued by the department, that decision improved the overall shooting scores of struggling shooters who opted to make that purchase. In addition, an unexpected result of switching to the GLOCK was that more and more female officers began to carry off duty as well because they could purchase a model that was easier to conceal than their full-sized duty models. Needless to day, their experience has simply proven what I have known for a good while—that a GLOCK is a great choice for self-defense duty! 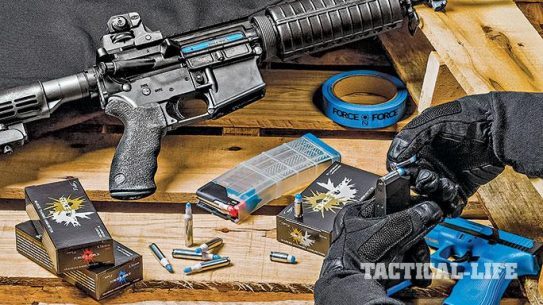